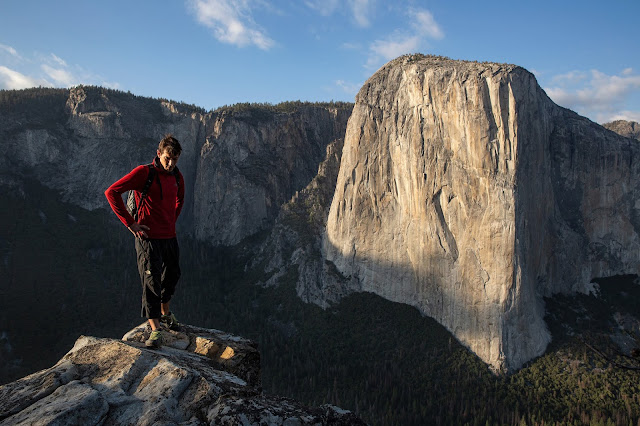 Some way into his climb up El Capitan, Alex Honnold uses a rope – or, in his own words, cheats. How else does one scale a sheer granite wall if not with climbing gear, one might reasonably ask? But Honnold is a free soloist, a rare breed of climbers who attack mountains with their hands and feet and little else. Having cheated, Honnold not only aborts the climb but can hardly bring himself to inform the crew filming, as if self-preservation and fear were somehow beneath him. Co-director Jimmy Chin finds the right analogy: “It’s reassuring that Spock has nerves."

Over the course of Free Solo, we watch Spock perform feats that are out of this world, but also become a little more human. Elizabeth Chai Vasarhelyi and Chin’s film, which won Best Documentary Feature at the Oscars this year, supplies all the hair-raising moments you’d expect, with cameras peering up or down cliff faces and Honnold hanging on like Spider-man. But it’s also a moving account of a thirty-something man who’s a little deficient as a social being finding the will to open up and rely on other people. Honnold and his girlfriend, life coach Sanni McCandless, staying the course in their relationship over the course of the film seems like almost as big an achievement as his scaling El Capitan, the first time anyone’s managed a free solo climb of this 3000ft Yosemite National Park rock formation without protective equipment.

When Sanni is first introduced, it doesn’t seem like she’ll be around for long. Honnold has lived in a van for nine years, heading from one climb to another. He eats straight from the pan, with a spatula. He describes his romantic life as “trending towards a girlfriend". However, he warns, “I will always choose climbing over a lady." But McCandless perseveres and slowly breaks down some of Honnold’s defenses. We learn that he grew up shy and melancholic, taking up climbing young and gravitating towards the particular discipline that would allow him to cut himself off from society.

Honnold is so off-handedly dark it’s funny, like when he argues that any of us could die at any time and that soloing makes it more “immediate", or when he says “The bottomless pit of self-loathing – that’s definitely the motivation for some soloing." At one point, he agrees to have an MRI to see if there’s something different about his brain that allows him hang off mountains without a rope. A CAT scan reveals that his Amygdala is less easily stimulated than a normal person’s – he needs something extra to trigger emotional responses like fear and anxiety. Yet, Honnold doesn’t seem to have a death wish. He prepares meticulously, going over notes that detail every step of the climb. And he has the good sense to abort, even though doing it in front of a film crew is embarrassing.

"Free soloing isn’t regular climbing. It’s solitary and personal, and requires extraordinary concentration. You’re standing on tiny edges, small variations in the texture of the rock," Honnold explains. “If you slip your hands can’t hold you". This meant that the film crew had to be skilled enough climbers to get up to where Honnold was, but not so close that they intruded in his space. The thought of pushing their subject to take an undue risk and causing his death hangs over the makers. When Chin says “All right, no mistakes tomorrow" to the crew, it carries an almost unbearable weight.

Free Solo is beautifully shot and unobtrusively directed, but there were times when I wished the film wasn’t so American in its plain-spokenness; the best Chin can come up with when Honnold completes the climb is “That is way too gnarly." Something like the introspection of the Philippe Petit documentary, Man on Wire – another film about a man performing near-suicidal athletic feats – is missing here, replaced by the more common indie loner psychology of films like Into the Wild. When Honnold bails the first time, it’s tough not to imagine how the scene would play with a Werner Herzog voiceover on the futility of human endeavor in the face of unforgiving nature. In place of a larger philosophy, though, are moments that are direct and affecting. There’s Sanni cutting Alex’s hair before the climb. There’s Honnold seeking reassurance from a kindly older climber and bailing on the conversation as soon as he gets it. And there’s the image of him on the summit, grinning broadly, saying “so delighted" over and over, but still enough in character to tell McCandless over the phone that he won’t cry, even though it’ll probably make the movie better.

This review appeared in Mint.
Posted by a fan apart at 1:42 AM