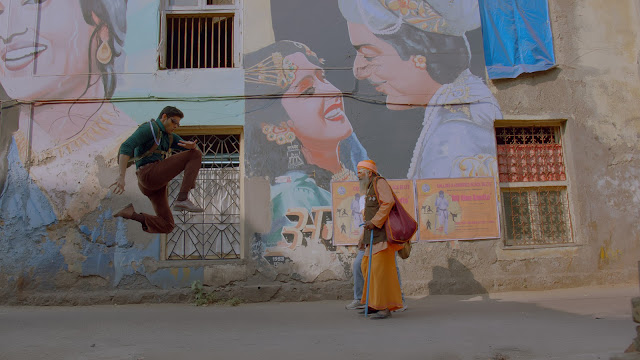 Genre tributes are a tricky balancing act. Tip one way and you end up parodying the thing you love. Tip to the other side and you have something that’s all flash and no heart. With Mard Ko Dard Nahi Hota, Vasan Bala manages something rare: a delirious pastiche with a heartbeat. It’s a tribute to the martial arts movies of the 1970s and ‘80s that Bala grew up on, but refracted through the prism of Hindi and Tamil commercial cinema and middle-class Mumbai. It’s also a story about the tug and torment of families, no less moving for being delivered with a wink.

Surya is born with congenital insensitivity to pain, a bigger problem than one might think (when a wound causes no discomfort it’s easy to ignore the loss of blood). After a normal childhood proves too dangerous for the hyperactive boy, his harried single father pulls him out of school and cuts him off from the world and his only friend, Supri. His grandfather (a warm Mahesh Manjrekar) encourages his passion for martial arts, buying him VHS tapes and helping him train in secret – a nod to all those wuxia films in which a young man goes to a faraway temple and emerges a master years later.

When Surya (Abhimanyu Dassani) heads out 17 years later, he’s a formidable fighter, but understandably deficient as a social being. Since cinema was his only window onto the world, life for him is now a series of action movie clichés – he sees damsels in distress and crooked cops where there are none. He’s reunited with Supri (Radhika Madan), who’s developed some mean fighting skills herself; they set out together to help his childhood idol, the one-legged Karate Mani (Gulshan Devaiah). Surya’s a martial arts comedy walking into two family dramas: Mani’s evil twin, the gangster Jimmy (also Devaiah), has ruined his life, and Supri’s under the thumb of her abusive father and fiancée.

It’s at this point that Mard Ko Dard introduces a nagging, intriguing dissonance. Surya is essentially a comic character, and there’s no need for Dassani – who has the affability of a young Madhavan – to go deep. But Mani is a palpably sad creation, a drunk and a failure, unkempt, halting. Similarly, the contrast between Supri’s exuberant ass-kicking and her timidity at home is jarring (she won’t rebel against her fiancée, who’s paying for her mother’s medical treatment). There’s a point being made here, about how families can wound you in ways that you have no defenses from, no matter how tough you are otherwise. Devaiah and Madan at times have the tremulous look of abuse victims – a bold choice for an otherwise sunny entertainer.

Bala comes closer than any Hindi director I can think of to making, in the style of Tarantino, a film that’s almost constantly referring to other films. This isn’t to say that he doesn’t have an aesthetic of his own – anyone who can make a Kamal/Rajani joke and follow that with a reference to George Lucas’ THX 1138, all embedded within a tribute to The Raid, obviously has a singular approach to cinema. Many of the nods are to Hong Kong cinema – primarily Bruce Lee but also a great Jackie Chan moment in which Surya saves the life of an opponent by pulling him out of the path of an incoming vehicle. This crazy-quilt approach extends to Karan Kulkarni’s soundtrack, which melds rockabilly, hip-hop, funk and Hindi film strings. Kulkarni does his own referencing – Life Mein Fair Chance Kiska is done in SP Balasubrahmanyam’s heavy vocal style, and I’m fairly certain I heard a nod to AR Rahman’s dramatic orchestration for Kya Kare Kya Na Kare.

I laughed out loud when Madan does her little solo dance – it’s entirely out of key with the badass she’s playing, but what better way to communicate joy than imitating Singin’ in the Rain? Bala speaks the language of genre cinema, but with none of the condescension of the fanboy. Under all the eccentricity and slo-mo gags and Easter eggs, there’s a warmth and enthusiasm which saves the film from being merely clever. Many bones are broken in Mard Ko Dard Nahi Hota, but not one of them is cynical.

This review appeared in Mint.
Posted by a fan apart at 5:05 AM