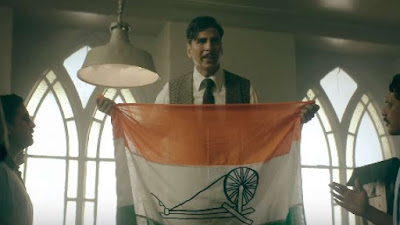 There’s a line repeated four times over the course of Reema Kagti’s new film which posits that India winning gold in hockey at the 1948 London Olympics would mean “do sau saal ki ghulami ka badla (200 years of slavery avenged)”. The first person to say it is Tapan Das (Akshay Kumar), a sports official consumed with the idea of India winning at the Olympics as an independent nation (three previous hockey golds had gone to British India). The third is Tapan’s wife, who tells the Buddhist monks helping her cook for the team: “Don’t think that you’re just preparing food – you’re taking revenge for 200 years of slavery.”

Even in these divided times, perhaps we can all agree that the cooking of patta gobhi isn’t any kind of blow against the empire. It’s been a patriotic few years for Hindi cinema (and India in general), and Gold isn’t the first film to go overboard professing its nation-love. Gold begins with the 1936 Berlin Olympics. As the Indian players leave the stadium after a game, two young men break from the crowd and try to raise the Swaraj flag. In the ensuing confusion, Tapan, who’s on the team staff, grabs the flag and stuffs it under his coat. The flag makes a cameo when India, captained by the brilliant Samrat (Kunal Kapoor) – a stand-in for Dhyan Chand – wins the final. But you’d best believe its big dramatic moment comes later in the film.

It’s 1946, and Tapan is a down-on-his-luck alcoholic reduced to influencing punters at wrestling matches. The news that India is planning to send a hockey team to the London Games – the 1940 and ‘44 Olympics were cancelled because of the war – gives him some purpose in life, and he talks the higher-ups into allowing him to scout for players. After Samrat tells him that his playing days are over, Tapan brings in another player from 1936, Imtiaz (Vineet Kumar Singh), as captain. Younger players are recruited as well, including Raghubir Pratap Singh (Amit Sadh), of the Balrampur royal family, and Sikh village boy Himmat Singh (Sunny Kaushal), set on a collision course by an early musical number which cross-cuts between their respective childhoods.

Gold is a change of scale for Reema Kagti, who directed the ensemble drama Honeymoon Travels Pvt. Ltd and the noir thriller Talaash. Kagti, who also wrote this film, can certainly whip up a set-piece – the party song “Monobina” has a lusty energy reminiscent of “Gallan Goodiyaan” from Dil Dhadakne Do, which she co-wrote. The lighting and framing (cinematography by Álvaro Gutiérrez) is fetching, as it was in Talaash. Some of the period detail is wonderful; for instance, when Tapan is still a wrestling tout, one of the fighters is Stanislaus Zbyszko, a legendary grappler who acted in the 1950 film Night and the City. But Gold can only hint at the religious and class divides in the Indian team at the time, though they must have been an issue so soon after Partition. And the film is robbed of both pace and intelligence by its tendency to over-explain.

Film-maker Ernst Lubitsch once said that the audience need only be given two and two; they’ll come up with four themselves and appreciate you for it. Kagti gives the viewer two, two, four, and a calculator. You see this in the scene where Samrat (who’s been brought in to coach the new team) tells Tapan and Raghubir about his favourite moment as a player – the time he drew a bunch of opposition players, who were all man-marking him, into a corner of the field and then passed to a free teammate, resulting in the game’s only goal. Now, we’ve already been shown several times that Raghubir won’t pass the ball to his teammates, so the import of this scene is perfectly clear. But Tapan hammers on, telling Raghubir that the most important player isn’t the goal-scorer but the one whose actions result in the goal being scored. The story itself is a nice idea, but that extra beat, that crucial unwillingness to trust the viewer, reveals the film’s insecurities.

For a 150-minute sports film, Gold spends surprisingly little time on the field. And when we do get to see hockey being played, it’s perfunctory – all quick cutting and close-ups. We’re offered little by way of tactics or individual skills; the only specific thing we know about any of these players is that Raghubir doesn’t like to pass. As a result, the different matches have no distinct personality, unlike, say, the ones in Chak De! India, or the bouts in Dangal. There’s a lone moment of inspiration, borrowed from a famous Indian victory in another sport, but for the most part this film is less concerned about hockey than the politics that accompanied it.

Even as the quality of the writing ranges up and down, the cast is consistent and winning. Vineet Singh brings a weary dignity to his role as the Indian, then Pakistani, captain; Kunal Kapoor is relaxed and charismatic; and Sunny Kaushal is riveting as the young hothead who’s a softie when he’s with his girlfriend. Akshay Kumar is almost defeated by a thick Bengali accent and half-a-dozen drunken scenes; his lead turn is respectable – as most of his performances have been in the last couple of years – but I wish Kagti and Kumar had done more to lay bare the psychology of Tapan, an incurable optimist and a bit of a clown, who’s thrown into a downward spiral whenever he’s kept from serving his country.

Yes, the national anthem is played in the film, and yes, everyone in the audience save for a few ungrateful critics stood up. I wouldn’t want to deny anyone their performative patriotism, but I’m not sure what it says about where we are as a nation that a theatre-full of thinking adults watched the final scenes of a film on their feet like it’s a perfectly natural thing to do.

This review appeared in Mint.
Posted by a fan apart at 3:36 AM