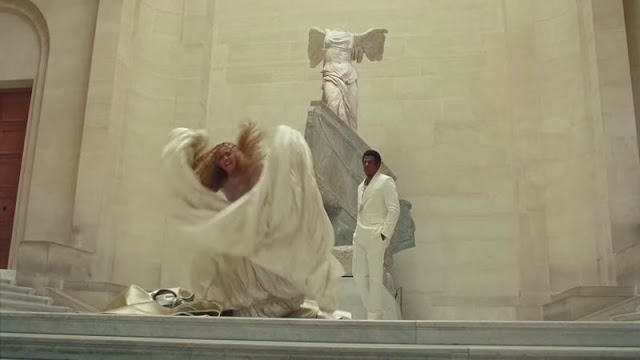 There’s been an explosion of visual pop art over the past few years that addresses and, in some cases, rearranges African-American history. It’s there in the chilling image of the Sunken Place in Jordan Peele’s Get Out, in the references to Warsan Shire, Julie Dash and Malcolm X in Beyoncé’s Lemonade, in Donald Glover’s deliberate minstrelsy in "This Is America".

There has also been a pointed effort by black artists to claim for themselves genres and spaces that have traditionally been regarded as foreign terrain. When singer Solange Knowles performed at the Guggenheim Museum in New York last year, she stressed that the goal wasn’t just inclusion. “I’m not settling for being allowed in these spaces,” she said afterwards, “but for tearing these f***ing walls down.”

Now, Solange’s sister is tearing down walls in an even more famous museum. On 16 June, Beyoncé and Jay-Z dropped a surprise album, Everything Is Love, and with it the video for its lead single "Apes**t". It unfolds in the Louvre, Paris, with the Carters in front of some of the best-known art in the Western world: Mona Lisa, Venus De Milo, Winged Victory Of Samothrace. Black bodies and faces are largely absent in the works on display—the camera has to zoom in on one painting to find coloured servants—but they are there in the video, occupying the museum space; some performing, others still. To see them and the world’s most famous celebrity couple in an environment practically devoid of coloured artists and subjects is enough to set the mind off. This isn’t just art, it’s art criticism—a series of juxtapositions that force us to examine something familiar with fresh eyes.

What makes this video especially potent isn’t just the connections that are explicitly drawn, but the fertile space created in which viewers might form their own associations. The cut from Théodore Géricault’s The Charging Chasseur—a cavalry officer on horseback, controlled even in the heat of battle—to an eerie shot of a black man standing on a horse, suggestive of a lynching, or the one from Hermes Fastening his Sandal to a formation of young men taking a knee is open to any number of interpretations. Every single work shown in the video may have a profound reason for being chosen, but even if that isn’t the case, it hardly matters. The Carters make you (and a million others) wonder why, and that’s a victory in itself.

When Jean-Luc Godard had his characters kill time by racing through the Louvre in 1964’s Bande À Part, it was both insurrectionary and playful—a raspberry blown at the solemnity of high art. Beyoncé and Jay-Z, though, aren’t playing around. Their target is more specific: the European art tradition that exists on the back of colonialism, slavery and the exclusion of non-white cultures. A similar revisionist approach can be found in the Uncomfortable Art Tours, started in 2017 by historian Alice Procter, which focus on the colonial, imperialist and slaver origins of the art on display at the British Museum, Tate Britain and other institutions. The tour description doesn’t mince words: “There are bloody handprints on the gallery walls, and the bodies of slaves and colonised peoples in the foundations.”

In its closing moments, "Apes**t" does a hop, skip and jump across 4,600 years of art history. As Beyoncé sings “I can’t believe we made it”, and Quavo, of the rap trio Migos, adds, “This is what we made, made”, we see the Carters silhouetted in front of the Great Sphinx of Tanis, the centrepiece of the Louvre’s Egyptian wing. Then there’s a close-up of Marie-Guillemine Benoist’s Portrait Of A Negress, the only painting in the video in which a black (anonymous) subject is foregrounded. Finally, we see Beyoncé and Jay-Z standing in front of the Mona Lisa, which is kept out of focus as they face the camera. The painting is the backdrop, they’re the artwork.