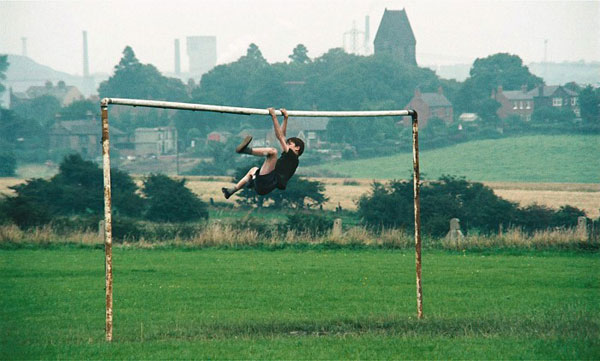 My favourite film scene involving football lasts all of 40 seconds. A group of men jostle and kick a ball in a narrow lane. They’re dressed in white shirts and dark slacks, the one red vest standing out. The afternoon sun paints the cobbled road a deep amber. Lens flares invade the frame. One of them grabs hold of the ball, a minor altercation follows. We watch him walk away into the light. Was it a dream?

The world’s most widely played sport has inspired commercial cinema of every stripe, from the corny thrills of the Goal films to the superior craftsmanship of The Damned United (2009) and the lunacy of Shaolin Soccer (2001). There’s much pleasure to be derived from middling-to-good films about football, but if snap zooms excite you as much as spot kicks, head further afield, where scenes like the one described above—from Hong Kong film-maker Wong Kar-wai’s mesmeric Happy Together (1997)—can be found, as a more questing form of cinema is applied to the beautiful game. 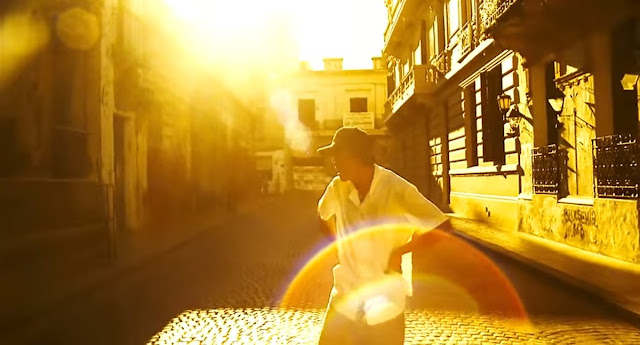 Germany has a proud footballing history and a long tradition of cinematic innovation. Ever so often, the two have overlapped, as they did in The Goalie’s Anxiety At The Penalty Kick (1972), an early film by Wim Wenders. This anti-procedural begins with a goalkeeper conceding a goal and getting sent off. He wanders around, and, almost offhandedly, commits a terrible crime, after which, instead of running or surrendering to the police, he heads to the country and waits. In a film that isn’t even about football, the figure of the goalie becomes a metaphor for a kind of stasis—at once part of the action and removed from it—and for the second-guessing that takes place between cop and criminal, keeper and striker.

England is as football-crazy a nation as Germany, and the sport has been making its way into their films from early on (a football-themed thriller, The Arsenal Stadium Mystery, was made in 1939). In 1969, Ken Loach adapted Barry Hines’ novel A Kestrel For A Knave into one of the greatest British films of all time. Even today, Kes feels wild and fiercely beautiful, like the falcon that Billy, a young boy from a drab mining town, trains. Though it’s a bleak and often desperately sad film, the one sequence many remember is a largely comic one: a game of football in which Billy and his mates are joined on the field by an overenthusiastic physical education teacher. Anyone who has played a sport will recognize this earnestly ridiculous type, living out a fantasy of being a famous athlete in the most mundane of settings.

A year earlier, in a docudrama he directed for the BBC, Loach allowed a similarly deluded fan a wish-fulfilling ending. The Golden Vision (1968) appears to be a documentary at first glance, though it’s actually a clever blending of real footage and scripted scenes performed by actors playing fans of English football club Everton. Loach examines, with typical directness, the selfishness of fandom—supporters who miss births and flee from weddings in order to be at matches. Yet, his sympathy for the working class is palpable: You can draw a line from a factory worker saying, “It gets a bit tough pushing them tyres around...but then I haven’t got any qualifications,” to the hard knocks his characters take in the 2016 Palme d’Or winner, I, Daniel Blake. 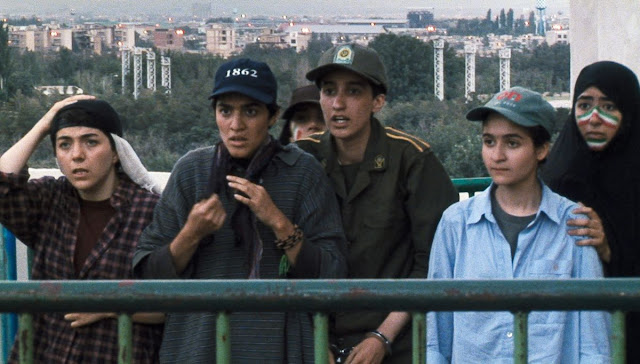 This March in Tehran, 35 women were detained for trying to attend a game between two local football teams. The following month, photographs of five girls at a football game disguised as boys went viral. Since the 1979 revolution, it has been almost impossible for Iranian women to attend male sporting events, which makes Jafar Panahi’s Offside as relevant today as it was when it released in 2006. It tells the story of a handful of young women who unsuccessfully try and break into a World Cup qualifying match in disguise. They are detained by police officers and held just outside the stadium—tantalizingly close to the action. Shot in trademark semi-documentary Iranian style, the film is a lively and often poignant examination of how denying true fans their fandom is every bit as soul-crushing as the withholding of ostensibly bigger freedoms. The moment when the detainees dance in an ecstatic huddle when the home team scores a goal, a sliver of the action visible through the bars of a locked gate, is one of the most moving scenes in modern Iranian cinema.

The sports documentary is as trope-bound as any fiction film genre, but some directors have turned it into abstract art. Olympia (1938), Leni Riefenstahl’s film on the 1936 Berlin Olympics, is at its most astonishing when it gets up close to the athletes, capturing every grunt and twitch. This intense focus on a player is taken to extremes in Zidane: A 21st Century Portrait (2006). Directors Douglas Gordon and Philippe Parreno used 17 synchronized cameras to track every move that Real Madrid striker Zinedine Zidane made during a 2005 La Liga match. We’re shown only those parts of the game in which Zidane is involved. The rest of the time we see him do the lonely work of an athlete, exerting effort without any immediate reward. It’s not an easy watch, but you won’t find a more intimate look at football in motion.

This piece appeared in Mint Lounge.
Posted by a fan apart at 1:13 AM