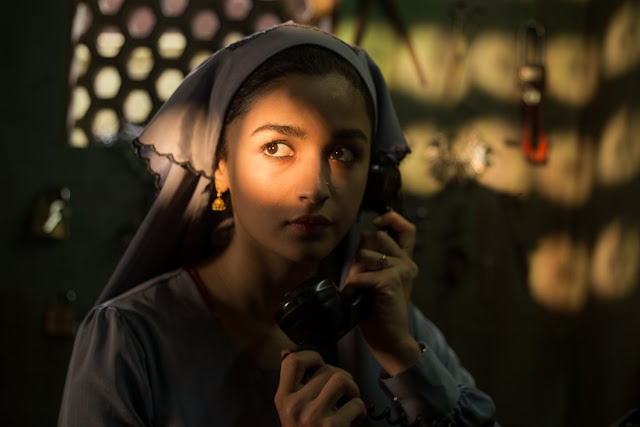 When Meghna Gulzar’s Raazi opened aboard an Indian navy vessel, in the present day but evidently a prelude to a flashback, with officers being told about the sacrifices earlier generations had made, I groaned: this was going to be that sort of film. My fears, it quickly became clear, were unfounded—the jump to 1971 was followed by 15 blissfully efficient minutes of scene-setting. With the war brewing in Bangladesh (then East Pakistan) as the backdrop, Hidayat (Rajit Kapur), a Kashmiri, passes information about Indian military plans to Parvez Syed (Shishir Sharma), a Pakistani brigadier. Parvez and Hidayat are friends, and the army man warns him about Khalid Mir, a key Indian intelligence agent. In the next scene, we see Hidayat with Mir (Jaideep Ahlawat) and realise he’s actually working for India.

Even before the central character makes her appearance, these early exchanges give the impression Raazi knows what it is and where it’s going. In spite of its perpetual forward drive, the writing has a minor-key poetry to it; there’s a surge of melancholy when Hidayat—who’s been coughing in earlier scenes—tells Mir that he’s got cancer, and has little time left. “Cigarette pee nahin, zindagi ke kash shayad lambe le liye (Never smoked, but maybe I took too long a drag on life),” is how he puts it, a line the director’s father, Gulzar, would have been proud to pen.

In his place as intelligence-gatherer under the nose of the Pakistanis, Hidayat proposes his daughter, who’s studying in Delhi University. And so Sehmat (Alia Bhatt) is called home, and needs surprisingly little convincing to agree to her father’s plan for her to marry Syed’s son Iqbal (Vicky Kaushal), also in the military, and become India’s “eyes and ears in Pakistan”. Mir takes over her training, teaching the 20-year-old how to bug a room, use Morse code, defend herself and use a revolver. Soon, she’s married and taken across the border—an Indian spy (from an extremely patriotic Kashmiri family, the film takes care to tell us) in a Pakistani household.

There’s another kind of infiltration happening here, of what has become a hyper-nationalistic, triumphalist genre by a more humanistic, shaded kind of filmmaking. Gulzar showed a knack for coiled narratives and vivid character sketches in Talvar (2015)—qualities Raazi shares as well—but what’s even more striking about her latest film is its even-handedness. Sehmat’s new family is painted with an empathetic brush; Iqbal, for instance, is as accommodating a groom as one could hope for. This gives Raazi that extra frisson when Sehmat begins her spying—far from being encouraged to hate the “enemy”, we actually don’t want some of them to be hurt. It’s worth noting that every major character, Indian and Pakistani, gets a country-above-all-else speech, and everyone delivers it with the same conviction.

Like she did in Talvar, Gulzar assembles and marshals an expert ensemble. A detail-oriented director like her is well-suited to an actor like Bhatt, who has a knack of making the tiniest gestures count. Bhatt handles the big emotional scenes fine—one particular reaction after having escaped detection is spectacular—but her Sehmat is built out of little glances and the sort of paranoid watchfulness that’s always ready to spring into action. Sharma and Kapur have a wonderful world-weariness, and Ahlawat (best known before this for his Shahid Khan in Gangs of Wasseypur) is a revelation, playing Mir, square of spectacles and manner, with great dryness.

Not all the narrative twists make complete sense—Sehmat’s brief career as a music teacher and a bold bit of impersonation are more wishful than plausible. Gulzar’s partner on the screenplay (she wrote the dialogue herself) is Bhavani Iyer, whose Lootera (2013) was criticised for its implausibility and, as a result, was sadly underappreciated for its emotionally complex approach to the thriller. Raazi—like Lootera, like Talvar—is a thriller about the disintegration of a family, but one that’s alive to the intricacies of language, the sensuality of an ankle bracelet, the human desires set aside in service of the nation. And the hopefulness of cords unsevered: a line from a prayer by the “spiritual father of Pakistan” and composer of "Saare Jahan Se Accha", Iqbal (“Lab pe aati hai duaa bann ke tamanna meri, zindagi shamma ki soorat ho khudaya meri”), making its way into the song "Ae Watan".

This review appeared in Mint.
Posted by a fan apart at 4:49 AM