The mahatma and the movies 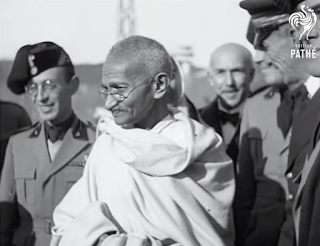 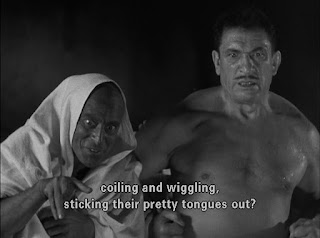 For someone with a rare talent for stirring imagery, Mohandas Karamchand Gandhi was curiously unenthused by cinema. In 1927-28, the Indian Cinematograph Committee conducted a survey on movie-viewing habits in the country. It sent Gandhi a questionnaire, and received the following reply: “Even if I was so minded, I should be unfit to answer your questionnaire, as I have never been to a cinema. But even to an outsider, the evil that it has done and is doing is patent. The good, if it has done any at all, remains to be proved.” In an interview in Harijan in 1942, he reiterated that he had never been to the cinema, but that “cinema films are often bad”.

It must have taken some doing, but K.A. Abbas, the well-known critic, director and screenwriter (notably of Shree 420 and Dr. Kotnis Ki Amar Kahani), penned an open letter to Gandhi in 1939 in Filmindia. “I have no knowledge of how you came to have such a poor opinion of the cinema,” he wrote. “I don’t know even if you have ever cared to see a motion picture. I can only imagine that rushing from one political meeting to another, you chanced to catch a glimpse of some lewd cinema posters that disfigure the city walls and concluded that all the films are evil and that the cinema is a playhouse of the devil.” He tried to reason with the Mahatma, appending a viewing list which included the American films The Story Of Louis Pasteur (1936) and Boys Town (1938) and Indian ones like Sant Tukaram (1936).

It seems Gandhi ended up watching two films in his life, both while he was convalescing from malaria in Juhu, Mumbai, in 1944. The first was Michael Curtiz’s Mission To Moscow (1943), which he apparently disliked. The other was Vijay Bhatt’s Ram Rajya (1943), a Hindi mythological, more suited to his tastes. A newspaper report described this private screening as a “historical event in Indian cinema”, and said that, at the end, “Mahatmaji seemed quite cheerful”.

Gandhi may not have thought much of cinema, but cinema was always interested in Gandhi. The first moving images of him were in newsreels which would play in movie theatres before the start of the feature presentation. Several can be seen online. There’s a silent reel from 1922, on the British Pathé YouTube channel, showing a lithe Gandhi on stage, addressing an assembly. The intertitle reads: “Gandhi—now condemned to six years’ imprisonment—the only cinema pictures ever taken of the notorious agitator.” He looks a lot frailer in Gandhi Fast Brings New Indian Crisis!, shot during his anti-untouchability protests of 1932.

In April 1931, the American newsreel company Fox Movietone got a scoop: Gandhi’s speaking voice (the segment was titled Mahatma Gandhi Talks—this just a year after MGM promoted Anna Christie with the tag line “Garbo talks!”). A team travelled to Borsad village to interview him; the equipment was transported by bullock cart, something which the first scene of the film (available on the GandhiServe YouTube channel as Footage-Gandhi-1931 May) makes a predictably big deal out of. Gandhi, who prefaced the interview by telling the crew, “I do not like this kind of thing, but I shall reconcile myself to it”—bare-chested, dressed in a dhoti, stares at his feet and gives brief answers on banning child marriage, instituting prohibition (“Oh, yes”) and dying for India’s freedom (he dodges, saying, “It is a bad question”). It’s hardly a compelling performance, but it didn’t matter, such was the curiosity about him at the time. The New York Times reported on a screening: “He speaks in a subdued voice, which is just audible when the theatre is absolutely still, as it was yesterday.”

In 1940, the first full-length documentary on Gandhi was assembled in India by A.K. Chettiar, a former newsreel cameraman for Pathé News in the US. Chettiar travelled the world for close to three years gathering footage; he edited down 50,000ft of material to an hour and 21 minutes. Abbas, writing in the 1940 issue of Filmindia, compared the documentary—Mahatma Gandhi: 20th Century Prophet—to Joris Ivens’ The Spanish Earth and Dziga Vertov’s Three Songs About Lenin, and ended by asking cheekily: “Will the first film seen by Mahatma Gandhi be ‘MAHATMA GANDHI’ starring Mahatma Gandhi?”

Around the same time the first newsreels of Gandhi reached the US, the first efforts to put a fictional Mahatma on screen were made. Historian Kevin Brownlow has a tantalizing line in his book The Parade’s Gone By about the British government approaching D.W. Griffith—the originator of the modern feature film—in London in 1922 to make a spectacular India production that would serve as an “effective answer to Gandhi”. Would Gandhi and other Indians have been portrayed as savages in that film, as black Americans were in Griffith’s racist epic The Birth Of A Nation? A possible answer might be found in the popular Hollywood adventure film Gunga Din (1939), starring Cary Grant, Victor McLaglen and Douglas Fairbanks Jr. The titular water carrier in this film is servile (and played by Sam Jaffe, a white man, in brownface), but it’s the villain (Eduardo Ciannelli, also white), a murderous cult leader, who’s a truly offensive caricature. He’s also dressed and presented in a manner similar to Gandhi, a fact that wasn’t lost on the Indian film press. In writing about the film, Filmindia recalled a 1935 two-reeler comedy called Everybody Likes Music, in which Gandhi was apparently “portrayed as an immoral drunkard dancing with a low woman in a cheap saloon”. 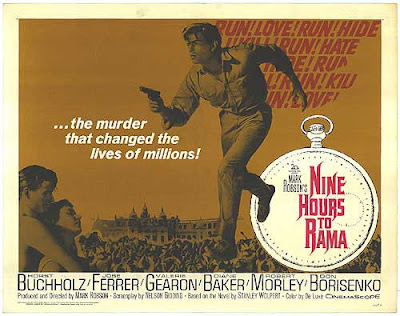 The first actual fictional portrayal of Gandhi appears to have been the 1963 film Nine Hours To Rama. Based on a novel by Stanley Wolpert, it imagines Gandhi’s killer, Nathuram Godse, in the hours leading up to the assassination. The film, shot in CinemaScope, looks fetching but is quite ridiculous, with Indian characters played by Hollywood actors speaking English in a variety of foreign accents (José Ferrer, from Puerto Rico, and Robert Morley, from Britain, are both in brownface). Especially strange is the Germanic Indian English that issues from Godse, played by Horst Buchholz, best known as the youngest hire in The Magnificent Seven.

Gandhi, thankfully, is played by an Indian—J.S. Casshyap, who had earlier acted in a couple of films and written the dialogue for Bombay Talkies films like Achhut Kanya (1936). He is there in a few scenes, and is only given pious banalities to mouth, but it’s nevertheless a terrific imitation. In fact, Casshyap gets closer to Gandhi’s speaking style than Ben Kingsley did two decades later in Richard Attenborough’s Gandhi (1982).

It isn’t surprising that Casshyap is a trivia question while Kingsley’s performance is regarded as one for the ages. Gandhi is stolid, stirring, reductive and eager to please. It’s not a film many Indians can be objective about, having grown up with annual doses of it on TV every 30 January. It remains one of the most inspired bits of casting in film history: a little-known Shakespearean actor from England playing the Mahatma. That Kingsley’s father was Indian—and Gujarati—was offered as justification for his casting. To be honest, not much justification is needed. It’s a fascinating performance, even if a large part of that fascination is seeing a white man transform himself into a fairly convincing Indian. Had an Indian actor played the part, it’s unlikely the Western press would have gone into such rhapsodies as they did with Kingsley.

Kingsley emerges from the film more Gandhi than Gandhi (when a statue of the leader was unveiled in London in 2015, Tushar Gandhi apparently alleged on Facebook that it resembled Kingsley more than his great-grandfather). Even writer Salman Rushdie, who excoriated the film in his essay "Attenborough’s Gandhi", admits at the end: “The form of the film, opulent, lavish, overpowers and finally crushes the man at its centre, in spite of Ben Kingsley’s luminous performance (at least he deserved his Oscar).” How much easier the film would have been to dismiss had Attenborough taken Jawaharlal Nehru’s suggestion for the role—Alec Guinness!—or gone with his other shortlisted candidate, John Hurt.

It’s unfortunate that so many screen Gandhis have been in English-language films. There’s nothing more irritating to the Indian ear than the singsong tilt that Kingsley, and others in his wake, adopt—intentionally or not, it has become the supreme aural caricature of an Indian speaking English, along with Peter Sellers in The Party and Apu from The Simpsons. In this regard, Rajit Kapur’s South Africa-era Gandhi in The Making Of The Mahatma (1996) comes as a bracing antidote. Though he speaks English in the film—not, it must be said, one of Shyam Benegal’s best—it’s of a straightforward, no-nonsense variety, the kind a young lawyer would use. The opportunity to play a younger, pre-mahatma Gandhi frees Kapur up to introduce notes of obstinacy and even cruelty in his portrayal that might not have been available to other actors playing the man. He allows the activist, and then the leader, to emerge by degrees; it’s only towards the end that we get glimpses of that beatific Gandhian confidence. 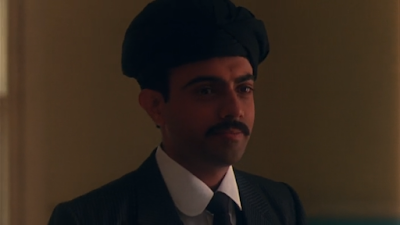 Kapur’s portrayal was the first significant screen Gandhi in the wake of Kingsley. Over the phone, I ask the actor whether that definitive performance had weighed on him. “The first few days, yes, but then I had to obliterate all those thoughts,” he says. That he was playing Gandhi, he says, was in itself a huge burden. “You feel that 20,000 people are going to comment on it—you’re not only playing a known figure, but the Father of the Nation. That fear was there, but it eased off after a week.”

In the years since, Gandhi has been played on the big screen by, among others, Annu Kapoor (Sardar), Naseeruddin Shah (Hey Ram!), Darshan Jariwala (Gandhi, My Father), four times by Surendra Rajan (The Legend Of Bhagat Singh, Netaji Subhas Chandra Bose: The Forgotten Hero, The Last Days Of The Raj, the web series Bose: Dead/Alive), and twice by Neeraj Kabi (Viceroy’s House, the TV series Samvidhaan). Each of these interpretations is of an older Gandhi. The differences are subtle: Jariwala’s Gandhi has slightly accelerated speech, Kabi’s (in Samvidhaan) an unsmiling directness. The closest Gandhi got to the cultural mainstream in India was probably Rajkumar Hirani’s comedy Lage Raho Munna Bhai (2006), which is more about the benign myth than the man. As Rachel Dwyer writes in her essay "The Case Of The Missing Mahatma: Gandhi And The Hindi Cinema", “This is not a political Gandhi but a Gandhi who is an inner conscience and moral guide, a fairy godmother who will help us realize today’s dreams.”

Along with his suggestion of Guinness as Gandhi, Nehru had another (and better) piece of advice for Attenborough: “Don’t deify him.” Cinema has struggled to resist the temptation to do so, repaying Gandhi’s suspicions about the medium with unquestioning love. Given his appropriation across the Indian political spectrum, a truly challenging Gandhi film doesn’t look likely in the near future. For now, we’ll have to content ourselves with looking closely, in scratchy newsreels and glossy biopics, for glimpses of the human within the Mahatma.

This piece appeared in Mint Lounge.
Posted by a fan apart at 3:27 AM

Email ThisBlogThis!Share to TwitterShare to FacebookShare to Pinterest
Labels: Ben Kingsley, Filmindia, Gandhi, Pathe, The Making of the Mahatma