Behind the insignificant man 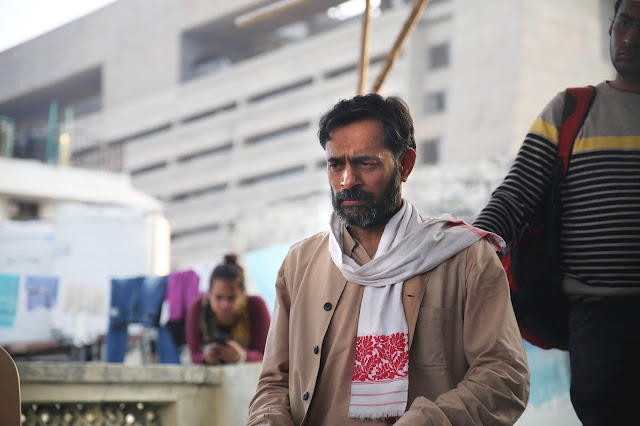 The team behind An Insignificant Man made, to my mind, two tremendous calculations. The first was a glorious stab in the dark: the decision to follow Arvind Kejriwal’s campaign for the 2013 Delhi assembly election from when it was barely an idea, hoping that it might turn into something. The second was to identify—perhaps during the edit—that while Kejriwal would be the motive force of the narrative, the audience might need someone more conciliatory to take them along. That counterbalance is Yogendra Yadav.

Directors Khushboo Ranka and Vinay Shukla filmed An Insignificant Man over two years, tracing Kejriwal’s journey from the formation of the Aam Aadmi Party (AAP), its grass-roots campaign in Delhi and its unprecedented success in the 2013 state elections, where they finished second after the Bharatiya Janata Party (BJP) and ended up forming the government. The access the directors wrangled is unprecedented and thrilling—the camera is a fly on the wall at party meetings, campaign stops, even finding the optimum bird’s eye position to capture party member Kumar Vishwas shout election results down from a window to an ecstatic crowd.

Kejriwal remains a fascinating figure, but a film with just him would have been exhausting. There’s a telling scene where he watches Prakash Jha’s Satyagraha, loosely based on his own journey; his party members are laughing and enjoying themselves, but Kejriwal is dead serious, perhaps already thinking about what he’ll tell the press later. As the film progresses Kejriwal seems to harden, and simultaneously, it feels like Yadav, with his lightly impassioned voice and earnest manner, is brought forward more prominently. Ranka and Shukla subtly convey the tensions between the two: Yadav running his hands over his face, usually after his leader has done something ill-advised, becomes a motif of sorts. He’s Eduardo Saverin to Kejriwal’s ruthless Mark Zuckerberg: a key supporting character in a revolution and, ultimately, a tragic figure (he was expelled from the party in 2015; he later called Kejriwal’s methods “dictatorial”).

Viewers will have their own grouses with the film, depending on where they sit on the political spectrum: not enough BJP, too much Sheila Dikshit (then in her third term as Delhi chief minister), AAP co-founder Prashant Bhushan reduced to a bit player. I wish the editing (Abhinav Tyagi and Manan Bhatt), which reaches a beautiful crescendo as the voting begins, was accompanied by more than a generic droning score. It’s nevertheless quite an achievement to have, running in theatres with Justice League and Qarib Qarib Singlle, a documentary which details how a party goes about trying to get elected in India. The past few weeks have provided more than a few reasons as to why there’s little explicitly political film-making in India. That’s good enough reason to catch the ones that break through.

This piece appeared in Mint.
Posted by a fan apart at 10:36 PM