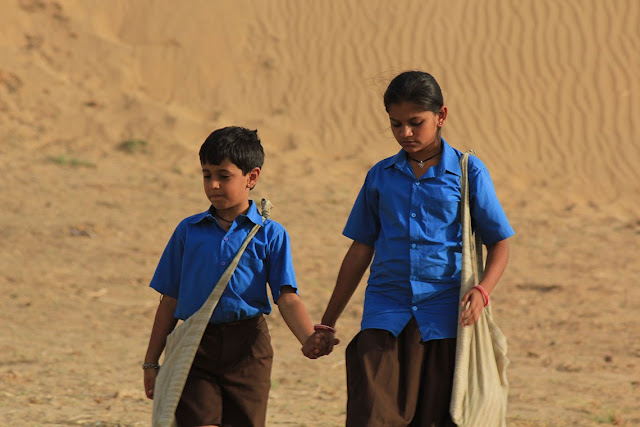 At a time when the hipper strand of our cinema has all but discarded the idea of the lip-syncing actor, it’s nice to be reminded that Indian films have always been about extending oneself through song. In Dhanak, runaway siblings Chotu and Pari are by a roadside somewhere in Rajasthan, looking for a ride. A tractor passes them by, singing emanating from somewhere within the carrier section. Suddenly, Chotu lets out a piercing, beautiful cry, completing a line of the song. The tractor stops. One of the passengers stands up and sings the next line. Chotu responds. And they’re invited on board. Conventional though it may seem to us, you’re unlikely to find such a scene in any other cinematic culture today.

Speaking of cinematic culture, Nagesh Kukunoor’s Dhanak is a reminder—if one were needed—that this is a hopelessly, incurably movie-mad nation. Ten-year-old Pari, visiting a tent cinema with her younger brother and uncle, sees a poster with her favourite actor, Shah Rukh Khan, asking people to donate their eyes. She writes to Khan asking if he can help her get Chotu’s eyesight back before his ninth birthday. When she learns that Khan is in Jaisalmer, shooting for a film, she sets off from her village to petition him in person, Chotu in tow (he isn’t thrilled; he would rather meet Salman Khan). The idea that our cinematic idols can be accessed in person, that they would be happy to help us with our problems…let’s just say there’s more in common between Dhanak and Fan than one might expect.

It’s not just the children. Nearly everyone Pari and Chotu meet on their journey to Jaisalmer is a movie nut. A friend of theirs claims to have hosted Khan in his house. “It’s been my dream to meet Shah Rukh, but I have to get these tomatoes to Ajmer,” a truck driver tells them. The singer on the tractor says he would really like to meet him, except that he has to attend a wedding. Even the forbidding-looking holy woman they encounter confides that she used to act with Khan in Delhi. “Tell him Vibha says hello,” she urges them.

Though it’s superficially reminiscent of The Night Of The Hunter, another film about an orphaned brother-sister pair on a fairy-tale quest, Dhanak doesn’t have the heart to expose its protagonists to anything as scary as Robert Mitchum’s preacher. The Rajasthani landscape that Pari and Chotu walk through is unfailingly benign. Nearly every stranger they meet is happy to offer them a ride, or food and shelter, or advice. The one stretch when they’re in some kind of danger ends abruptly and unconvincingly; it’s as if Kukunoor got all the child-in-peril scenarios out of his system with Lakshmi two years ago.

In its two-hour running time, Dhanak throws more charm at the screen than one might feel equipped to handle. Krrish Chhabria, who plays Chotu, is unabashedly, precociously winning, though I preferred the more understated warmth of Hetal Gada as Pari. As the children come across one outlandish character after another—a peace-and-love-espousing hippie, a blind fortune-teller, a disturbed man clutching a steering wheel—the whimsy and the good vibes can get a little wearying. Yet, it’ll be a brave soul who can remain entirely immune to a film as transparently audience-pleasing as this.

This review appeared in Mint.
Posted by a fan apart at 6:46 AM