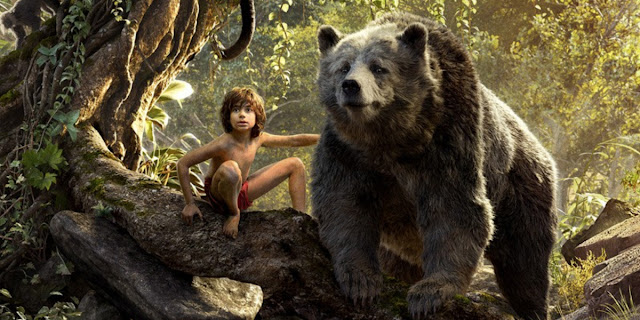 Solidly persuasive as it is, Jon Favreau’s live-action adaptation of The Jungle Book can ultimately be seen as testament to the durability of Disney’s original animated version. Those familiar with the 1967 film will note that very little has changed. Bagheera is still moody and magnificent. Baloo sings "The Bare Necessities". Kaa hisses “trust in me”. Wolf cubs continue to be criminally cute. Last year, The Force Awakens showed there were huge profits to be made from well-rendered nostalgia. Favreau walks that line, essentially remaking the 1967 film for a generation brought up on 3D spectacle.

It may sound like a backhanded compliment, but this Jungle Book is a fine children’s film that’s happy to be just that. It’s scarier than the original, of course, but I would imagine that children nowadays will take a 3D tiger leaping out from the screen in their stride. Though the pace is frantic, the overlying narrative is simple enough for a five-year-old to grasp. “Man-cub” Mowgli, raised by wolves as a member of the pack, must learn what it means to be human. He’s helped out by Bagheera the black panther and Baloo the bear, and hunted by the fearsome Shere Khan, a tiger who harbours a grudge against human folk.

Some of the film’s weakest moments are when it reaches back to its source, the collection of stories by Rudyard Kipling published in 1894. Kipling’s “law of the jungle” is repeated throughout—presumably so children have it memorized by the time it turns up in the climactic moments—but it cannot shed its portentousness (my favourite moment is when Baloo hears Mowgli recite it and says, “That’s propaganda.” He’s absolutely right—Kipling was a thorough imperialist, and the last word in the poem is a command: “Obey!”). Like the 1967 film, Favreau refrains from explicitly mentioning India, though one Hindi phrase, present in the original text, creeps in: bandar-log. Only, the way Bill Murray pronounces it, “bandar” rhymes with “gander” and “log” with “hog”.

Mowgli has always been, for me at least, the least interesting character in The Jungle Book, but that’s not the only reason I found the one flesh-and-blood performance in the movie grating. Neel Sethi, the boy of Indian origin who plays Mowgli, speaks in the petulant tones of a child in an American sitcom. This was offset, thankfully, by some terrific voice-work by Murray (Baloo), Ben Kingsley (Bagheera), Idris Elba (Shere Khan) and Christopher Walken (King Louie), not to mention the dilemma posed by Kaa the python, a singular nightmare for those who love Scarlett Johansson but can’t stand snakes. This is allied to to the uniformly impressive CGI, with the surfaces of jungle and animal alike rendered remarkably tactile, as the viewer is whisked from one breathless set-piece to another.

Favreau’s film has been released in India a week before its US premiere. Those who view this as a victory of sorts should note that the only things that are “Indian” about the film are its origins. But, then, The Jungle Book has always been a white fantasy about India, land of pythons, tigers, loincloths and bandar-log. Perhaps one day someone will create a revisionist version, with Shere Khan as the colonizing figure and Mowgli the spirit of 1857. Until then, this pounding, potent film will do just fine.

This review appeared in Mint.
Posted by a fan apart at 4:08 AM