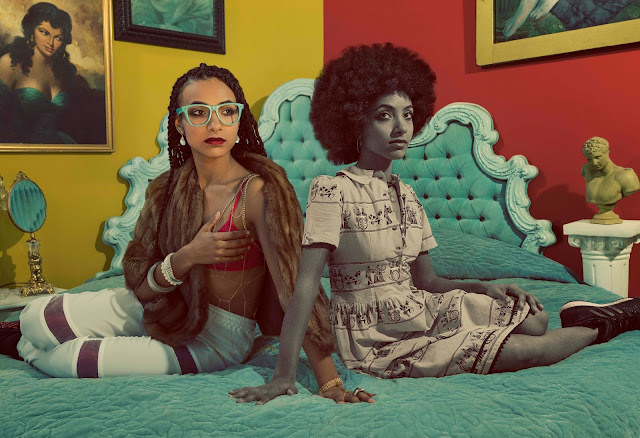 In 1961, Norman Mapp released a track called "Jazz Ain’t Nothin’ But Soul", on which he sang: “For me, jazz is all the truth to be found/Never mind who’s puttin’ it down”. Bassist-singer Esperanza Spalding covered it as a bonus track on her 2012 album Radio Music Society, but when she sings it live, she likes to begin with a spoken preface. “Yes, I’m a jazz singer, it’s true,” she told the audience at the 2009 Austin City Limits festival, “but it’s not, maybe, what you might be expecting.”

Emily’s D+Evolution, Spalding’s fifth album, has a fair bit of jazz, some soul, and a bracing dose of what you might not be expecting. Gears and genres change without warning, rarely allowing listeners the comfort of an easy groove. "Rest In Pleasure" starts off with a tasteful jazz-rock squall, which segues into something resembling mainstream R&B, before a wordless chorus turns everything choppy. "Farewell Dolly" is a warped version of a show tune, the Broadway-ish vocals sitting uneasily atop ghostly bass runs by Spalding.

The jazziest thing about the album isn’t the arrangements (there are hardly any horns) but rather, its disinclination to settle for easy hooks and familiar structures. In this, she not only resembles modern artistes, from Erykah Badu to Kendrick Lamar, who’ve used jazz to unusual ends but also earlier songwriters with a penchant for messing with form and structure. On "Judas" and "One", Spalding’s phrasing sounds like Joni Mitchell circa Hejira and Mingus, albums on which her music took a jazzy, fractured turn. I was also reminded of Mitchell’s contemporary Laura Nyro, a cult figure now, but largely unappreciated in her time. Nyro had a gift for dark melodies and seat-of-the-pants changes, qualities present throughout Emily’s D+Evolution. Indeed, the sinuous "Earth To Heaven" could be an out-take from Eli And The Thirteenth Confession, Nyro’s best-known album.

In 2011, very much against the run of play, a barely known Spalding won a Grammy for Best New Artist, beating Drake, Justin Bieber, Mumford & Sons and Florence + The Machine. This brought her to wider public notice, though she remains a niche, rather than ubiquitous, presence on the music scene. Emily’s D+Evolution, though her most fully realized work, is unlikely to change this. The songs are funky and cerebral, lithe and unpredictable. "Ebony And Ivy" opens with breathless spoken word, before mutating into contemporary rock. I Want It Now is an even more bizarre mélange of ethereal backing vocals, jazz guitars and Spalding—or is it the alter ego, Emily, which she’s assumed for this album?—theatrically snarling, “Give it to me nowww.”

Emily D+Evolution can neither be relegated to the background, nor is it exactly music you can get down to. The good news is that today’s play list-making, genre-hopping audience is unlikely to be fazed by this. “No more acting these predictable roles,” Spalding sings on "Unconditional Love". Free your mind, and the rest will follow.

This review appeared in Mint.
Posted by a fan apart at 4:22 AM