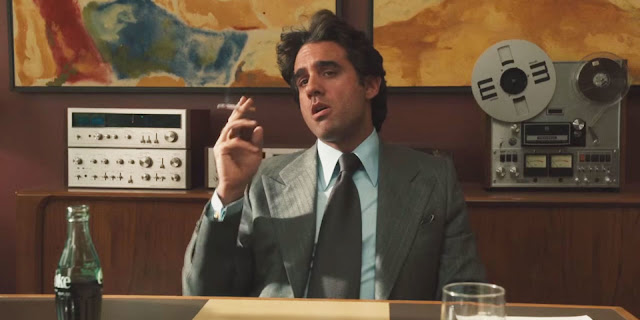 Early on in the pilot of Martin Scorsese and Terence Winter’s new series Vinyl, the camera pans up on Richie Finestra (Bobby Cannavale), founder of American Century, a New York City record label in the late 1970s, and we hear his voice on the soundtrack. “I had a golden ear, a silver tongue and a pair of brass balls,” he boasts. How predictable, I thought. A voice-over out of Goodfellas/Casino/The Wolf Of Wall Street, imagined by the man who had made these films and scripted by someone who could spit out hard-boiled dialogue in his sleep. Vinyl, I decided, would be two masters on autopilot, and I wanted nothing of it.

That feeling passed—somewhat at least. After the 2-hour Scorsese-helmed pilot, I’ve watched episodes 2, 3 and 4 of Vinyl (created by Scorsese, Winter, Mick Jagger and writer Rich Cohen) and found myself drawn in by its messiness and its theatricality, its attention to detail and, above all, its willingness to cut, copy and print the legend. The pilot ends with a New York Dolls gig at the Mercer Arts Center in Manhattan that’s so wild, it literally brings the roof down. In reality, the Dolls did play at the Mercer, and the building did collapse, just not on the same day. Such details are brushed aside by the image of Richie, bloodied and dusty, walking unsteadily away from the rubble with Chuck Berry’s "Rock ‘N’ Roll Music" playing in his head.

Vinyl’s pilot—which seemed to me, on first viewing, like The Wolf Of Wall Street would have been if it had been set in the music business—sends a bunch of plot-lines scurrying in different directions. First, there are the repercussions of Richie’s decision not to sell his label, which is floundering financially, to the German company Polygram. There’s his relationship with his wife, Devon (Olivia Wilde), a former Andy Warhol muse, now a stifled housewife; with his employees, in particular his sad-sack head of promotions Zak Yankovich (Ray Romano); and with Lester Grimes (Ato Essandoh), a blues singer he built up and then let down. There’s also the matter of his beating a DJ to death and disposing of the body. Following episodes have deepened some of these stories—especially Lester’s—but on the whole, there is little that isn’t reminiscent of half-a-dozen Scorsese movies or any number of prestige TV shows with anti-hero white male protagonists. 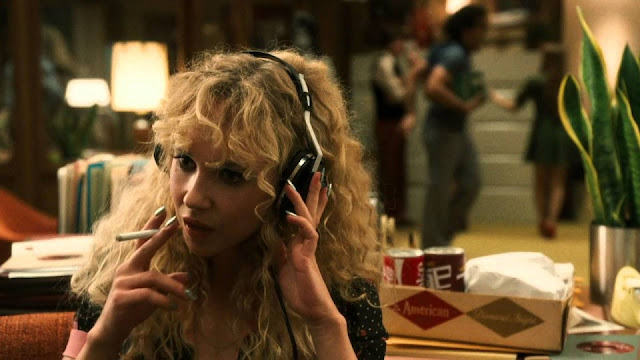 Vinyl may be derivative and predictable, but it’s also a trip. Everyone’s shouting and having sex and doing drugs, there’s always some great song or the other playing, and all the directors seem to be having a great time doing their best Scorsese imitation. Like Boardwalk Empire, Scorsese’s last collaboration with Winter, Vinyl is simultaneously expansive and meticulous in its recreation of a very particular world. Most of the action takes place in the late 1970s, a period of extraordinary flux for the music industry, with manicured pop, classic rock, funk and soul all fighting for radio time just as punk was rearing its head and the first experiments in hip hop were taking place. This is reflected in the show’s stunningly varied, virtually never-ending soundtrack, which comes at the viewer in three avatars: as background tracks commenting on the action, as songs performed by characters and in dream sequences that allow the show to pay tribute to everyone from Howlin’ Wolf to Jerry Lee Lewis.

Some of the references are only likely to make sense to music fans of a certain vintage. Will viewers recognize the blinding light the camera keeps staring into during a bar performance of Otis Redding’s "Mr Pitiful" as a tribute to D.A. Pennebaker’s documentary Monterey Pop? How many are likely to care about the intricacies of payola, or the uneasy alliance that once existed between Jewish producers, Italian mobsters and black singers? It would seem that this number is not as much as HBO might have expected. The pilot logged a low 764,000 viewers—disappointing for a show with names such as Scorsese, Winter, Jagger, Cannavale, Romano, Wilde and Juno Temple. Despite the lack of chatter surrounding Vinyl, HBO has renewed the show for a second season. Yet, even as it moves into its fifth week, there are few signs that the public at large cares about Richie or Devon or Alice Cooper and his python. In India, where the best place to gauge whether a foreign show is making any impression is on Twitter, there has barely been a mention.

The series has a 10-episode first season, so we might only see a couple of plot threads resolved this year (hopefully, one of them will be the DJ murder, which felt like a misstep from the moment it happened). I hope the series finds its groove, and its audience; whatever its faults, it’s one of the most unabashedly entertaining drama series in a while. And when it digs deep, it finds a moment or two of magic. One of these arrives during a flashback, with Lester recording a doo-wop number as Little Jimmy Little. We start the scene at the engineers’ console, with both backing track and voice audible. But then we’re inside the studio, inside the singers’ headphones, and all we hear is the shoop-be-doops of the backing vocalists and Lester’s rich voice ringing out. It’s the sort of intimate, spine-tingling moment you would expect from a show called Vinyl.

This review appeared in Mint Lounge.
Posted by a fan apart at 7:31 AM