Wrote this for the Mint Lounge Photography Special. 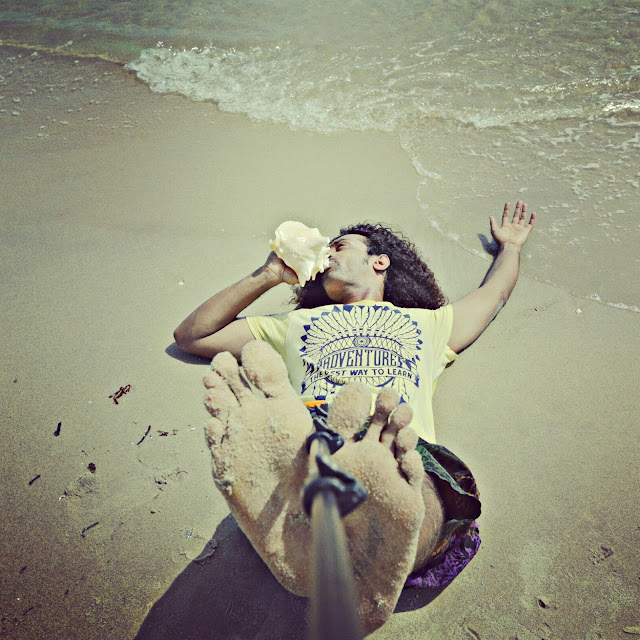 The selfie has been around in some form or the other since the invention of the daguerreotype in the first half of the 19th century. The advent of phone cameras brought it to the edges of the cultural mainstream, though it was the front-facing camera that ensured taking photographs of oneself needn’t be a furtive, inaccurate exercise. About a decade later, the selfie is all-pervasive, all-conquering. Narcissus would have approved of a society in which gazing at oneself, liking what one sees and offering up the same to public scrutiny is, far from being punishable, actually encouraged. All around the world, faces preen and pout, smirk and smoulder at their mobile phones, eager for a small dose of social validation, a couple of dozen hearts on Instagram.

India, eager adopter of global trends, has taken to selfies with duck-faced enthusiasm. With our Prime Minister’s penchant for training the camera on himself, we’ve literally become a top-down selfie society. From Hauz Khas Village in Delhi to actual villages, countless people every day are taking pictures of themselves, showing them to their friends, sharing them on social media. The ones with the largest Instagram followings are people who are already famous for something: actors, singers, models, politicians. Yet, it’s the ones on the rung below them that are India’s real selfie stars, known for nothing much more than a willingness to share pictures of themselves.

For Clince Varghese, the selfie is a calling card. A multi-hyphenate to beat most multi-hyphenates, this 24-year-old Mumbaikar is a motivational speaker/anchor/actor/voice-over artiste/vocalist in a rock band. He’s also a travel nut who takes an inordinate number of selfies—qualities that came in handy when he was selected as one of the contestants for MTV’s Great Selfie Challenge last year. Varghese went on to garner 25,623,050 votes and win the show (and the title of “selfie king”). For the “international border selfie” task, he had taken a selfie on a beach at Rameswaram. “I’m blowing a conch while lying on the beach, with the selfie stick between my legs,” he says over phone. “I timed it so the water is hitting my hair. I included the conch because it dispels negative energy.”

If you think all this suggests that Varghese takes selfies more seriously than the average Instagrammer, you are absolutely right. “It’s very difficult, bro,” he says, when asked whether he agonized over which photograph of his to put online. “It’s like asking a parent which kid they like best.” He posts on Instagram at least once a day, mostly selfies or velfies. “Most of my selfies are me trying to tell a story,” he says. “They have sociocultural elements, from culture and religion to food and biodiversity. It’s not just me opening my mouth and saying ooh-la-la.” This is true, even if Varghese’s signature expression is a comically wide-eyed, open-mouthed one.

Along with Instagram, Varghese posts on YouTube, Facebook and Twitter; he knows his various followings all feed into one another. This idea of a rounded social media persona has also been adopted—albeit in a more professional manner—by Scherezade Shroff, a 29-year-old YouTuber, fashion blogger and former model who is also a qualified lawyer. “I don’t see my Instagram account as an independent entity,” she says, adding that a lot of her followers probably see her fashion-centric videos on YouTube and follow her on Instagram. Sometimes, the content crosses over, like when Shroff uploaded a 10-minute YouTube tutorial on “How to take the perfect selfie” (look and feel your best; never take just one; express yourself; make a collage and use filters; buy a Monopod).

With over 60,000 followers, Shroff’s Instagram feed is very popular, though she says she puts little thought into her selfies. “Honestly, I don’t feel like this is a serious platform for me,” she says. “I try and have fun with my viewers.” For someone with a professional interest in being perfectly turned out, many of her Instagram posts are gratifyingly casual, even kooky. She appears sans make-up in a number of selfies and has what one assumes is a very un-model-like propensity for the duck face. “Most times, people tell me they like my Instagram account because it’s very real,” she says. “There have been selfies on my worst days and on my best days as well.”

The impression of candidness, whether genuine or carefully curated, is integral to a certain kind of selfie stardom. Most of the selfie-takers we spoke to insisted that perfect photos weren’t the goal; what they’re normally after are photographs which convey their “personality”. Oftentimes, a good hook backed up by consistent posting is all that’s required for an Instagram account to take off. Last year, Jet Airways pilot Simran Kaur started posting pictures in uniform on Instagram. She had some 150-200 followers at the time. Today, she has over 27,000. “I still get maximum ‘likes’ for uniform selfies—always a thousand-plus,” the 26-year-old says. Her sister, Amrit, is also a pilot: She has 12,500 followers, and a higher selfie-to-regular-photograph ratio than anyone I’ve ever seen.

The selfie is a perfect photographic embodiment of the look-at-me digital era; by making yourself the subject, you’re inviting people to pass judgement not only on your photograph but also on you. It stands to reason, then, that even those with large followings pay close attention to the responses their posts are evoking. Shroff, Simran Kaur and Varghese all say they adopted their signature expressions (duck face, V-sign, open mouth) after people started pointing them out in post after post. They took notice if a particular post didn’t do as well as others. “I do pre-analysis, post-analysis,” Varghese says, admitting that he had spent the half-hour before our conversation just deciding whom to tag in a particular post.

Even as India hits peak selfie, the world seems to be stumbling towards a post-selfie era. Already, there are signs that suggest the selfie is being questioned, dissected. In Los Angeles in 2014, an artist named Amalia Ulman revealed that the seemingly banal posts—many of them skimpily clad selfies—she had been putting on Instagram for months were actually part of an art project called “Excellences and Perfections”. The Cannes Film Festival instituted a no-selfie rule on the red carpet last year. Hopefully, by the time India’s hipster crowd decides they’re so over selfies, Varghese, Shroff, Kaur and their fellow kings and queens would have garnered enough Likes to last them a lifetime.
Posted by a fan apart at 4:15 AM