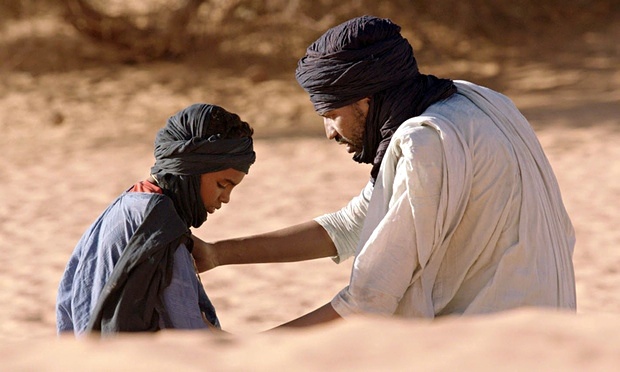 For 10 months in 2012 and 2013, Timbuktu, a city in Mali, was occupied by the religious group Ansar Dine. The group, whose name means “defenders of the faith” in Arabic, imposed a radical form of Shariah. Music was banned, women had to cover their heads, ancient shrines were destroyed; the punishments included beatings and beheadings. The town was eventually liberated by French forces.

Abderrahmane Sissako’s devastating Timbuktu tells the story of this occupation. The film begins with Timbuktu already under the control of Ansar Dine. Gunmen prowl the streets. The locals are scared into compliance, though small signs of rebellion pop up. Music is banned, but a group of youngsters can’t help gathering in a room at night and jamming. Football is banned as well, but there’s a marvellously surreal scene in which a group of boys is playing a match, very seriously, without a ball. Yet there’s a sense that something unpleasant is going to happen. 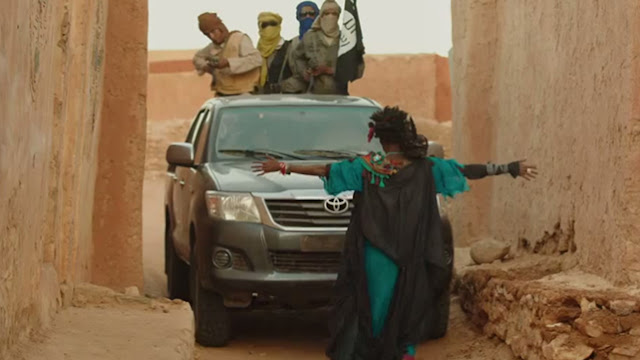 At the film’s centre is a Tuareg family—a cattle-herder called Kidane (Ibrahim Ahmed dit Pinto), his wife Satima (Toulou Kiki) and their charming 12-year-old daughter Toya (Layla Walet Mohamed)—living on the outskirts of town, among the dunes. When one of the cows Toya is minding breaks loose and wanders into a fisherman’s net, it is killed. Kidane, revolver concealed in his clothes, goes to confront the man. There’s a scuffle, the gun goes off, and the fisherman is killed. Kidane is picked up by the militia and, in short order, sentenced to death.

Timbuktu builds quietly but purposefully towards its last 20 minutes, when several acts of violence are unleashed. There are 40 lashes for the music-making youngsters, which results in the heart-rending sight of one of them singing through her tears while being whipped. There’s a mercifully brief scene of an adulterous couple being stoned to death, intercut with shots of a jihadi—whom we’ve just seen breaking the law himself by smoking—doing a sort of solo ballet. And there’s Kidane—more distraught that he can’t see his daughter than he is about his impending death.

Sissako is regarded as one of the great modern African directors, and after seeing Timbuktu, you’ll know why. Despite the overarching tragedy of the narrative, there’s a sly humour at work, especially the scenes pointing out the absurdity of workaday religious extremism (a fisherwoman who is told to wear gloves while selling her wares is so disgusted that she gets herself arrested). The unreliability involved in interpreting another’s words—which is what the extremists are doing—is underlined by the amount of translation going on: from Tamasheq to English to French to Arabic. Fittingly, Timbuktu finds its poetry not in the spare dialogue but in the images Sissako and cinematographer Sofian El Fani (Blue Is The Warmest Colour) summon up: ancient artefacts used for target practice; a former rapper trying and failing to make a video renouncing his past sins; Kidane stumbling across the river at dusk; Toya, at the end, trying to outrun her life.

This review appeared in Mint.
Posted by a fan apart at 12:27 AM