Three years ago, S.S. Rajamouli directed the very strange and funny Eega, about a man reborn as a fly. This film, produced in both Tamil and Telugu, was so successful that it was dubbed in Hindi and released as Makkhi. Its success must have played a role in winning Rajamouli his next assignment, Baahubali: The Beginning, made simultaneously in Telugu and Tamil and rumoured to be India’s most expensive film. And though I’m generally wary of big-budget Indian action films—on the grounds that they’re mostly incompetent rip-offs of existing blockbusters—Baahubali, set in unspecified ancient times, does manage to convey its size and scale with a great amount of confidence.

It begins as any good epic should, with a baby being spirited away. The woman doing the spiriting dies, but the baby is rescued by local villagers. He grows up unusually strong and with a penchant for historically minded adventure sports, such as climbing up the sides of waterfalls and carrying a shivling on his shoulders. He answers to the name Shiva, but it is obvious that he is the Baahubali (strong-armed one) of the title. 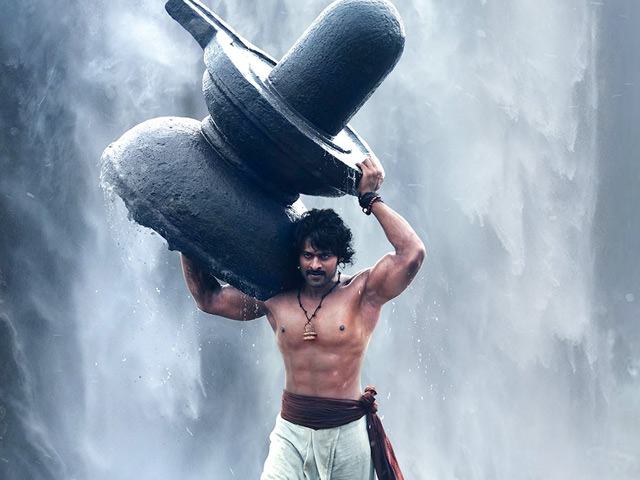 A disappointingly by-the-numbers plot is set in motion when Shiva (Prabhas) meets Avantika (Tamannaah Bhatia). She’s part of a group of rebel warriors who are trying to free their queen, Devasena (Anushka Shetty), who’s been imprisoned for 25 years by the evil Bhallala Dev (Rana Daggubati) and his father. Through a long flashback that takes up most of the second half of the film, it is revealed that Shiva is the son of prince Amarendra Baahubali (also Prabhas), who was in competition with Bhallala Deva for the throne. After helping defeat invading forces in an epic battle, Amarendra is named king. How he was subsequently killed, and how Shiva avenges him, we’ll only know when the second part of this film, Baahubali: The Conclusion, rolls around in 2016.

That Rajamouli knows his way around VFX was evident in Eega, but he negotiates the massive jump in scale well. Everything is designed for maximum impact—if there are bales of straws, you can be sure they’ll be set on fire so that a chariot can be driven through them. The vistas that unfold have a digitally enhanced grandeur that’s familiar from films such as Troy and Exodus: Gods and Kings, modern versions of the old sword and sandal epics. Bhallala Dev’s chariot even has a whirring scythe attached to it—a little visual tribute to Ben-Hur.

It’s not all good news. Prabhas is massive and muscled, but not very graceful; it’s not as much fun seeing him hurl himself around as the film thinks it is. The rest of the cast ranges from serviceable to flagrantly bad, though Sathyaraj has a nice turn as a brave but conflicted warrior. A huge drawback of the film is its writing. The dialogue in the Hindi dubbed version is terribly stilted; I don’t know what Prabhas says in the Telugu version, but in this one he tells Bhatia: “You are a girl. I am a boy. I have come here to love you.” (Not very smooth, but infinitely better than placing a snake on her so that he can draw on her shoulder. Don’t ask.) Baahubali could also have done with some humour. The best joke arrived at half-time and wasn’t even part of the movie. “Baahubali: The Intermission”, the intertitle read. With cinematography by KK Senthil Kumar and some fantastic art direction by Sabu Cyril.

This review appeared in Mint Lounge.
Posted by a fan apart at 4:09 AM