Some movies are better viewed young. As we grow older, we become less susceptible, more jaded. We start to pick holes in our childhood fantasies. Superman is great for picking holes in. For starters, it’s very, very square. The screenplay is turgid, despite having names like Mario Puzo (Godfather) and Robert Benton and David Newman (Bonnie and Clyde) attached to its earlier drafts; characters say things like “I'm here to fight for truth, and justice, and the American way.” The adolescent Clark Kent looks very little like the older one. The scenes on Krypton are stagey and visually unimpressive. And no matter what Marlon Brando does as Jor-El, Superman’s father, all you can see is that ridiculous wig.

Superman was always the square one – the all-American superhero mothers wanted their daughters to bring home. Batman was a brooder, Spiderman was a troubled teen, Superman was blander than bread. It’s a miracle that Christopher Reeve manages to make Superman so appealing without deviating from the original template. His belief in the character pulls the audience along. The movie’s original marketing hook was “You’ll believe a man can fly”. What Reeve does is even more impressive, because he makes you believe it while decked in bright red underpants. Thirty-two years after Superman’s release, this much is clear: his performance makes the movie. It’s also fair to point out that some of the flying scenes still look pretty nifty, and that Margo Kidder is a hoot as Lois Lane.

If you’re the kind who values footnotes as much as the novel, you’ll enjoy the bonus features included. There are three documentaries: one on Superman’s pre-production, another on its development, the third concerning its visual effects. Reeve, Kidder, principal villain Gene Hackman and gravel-voiced director Richard Donner all turn up to reminisce. Also included is Reeve’s screen test, proof that he had the character down from the very beginning. The commentary track, though, is a rather dubious error – the disc advertises one by the director, instead we get producers Pierre Spengler and Ilya Salkind, who fired him after he’d shot a major portion of Superman II. Apart from that, it’s an interesting glance at a movie which, for better or worse, set the standards by which future comic book flicks would be judged. 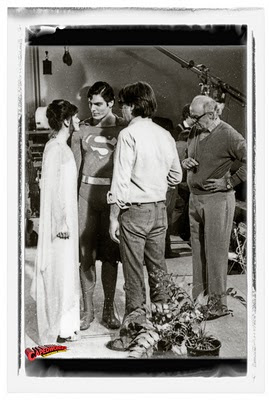 it was just awful