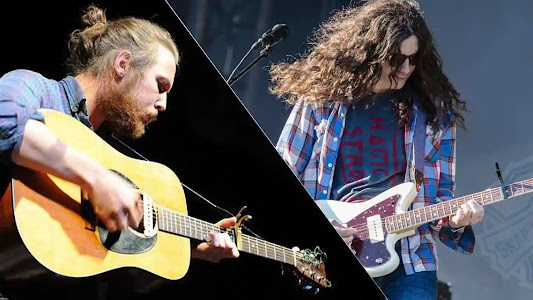 On 22 September, Fleet Foxes dropped their new album, Shore, on YouTube. Along with it came an hour-long film directed by Kersti Jan Werdal, which had the album’s 15 tracks set to long, often static shots of the outdoors: the ocean, fields, mountains, streams, animals, birds, and the odd human. The release was timed to coincide with the autumnal equinox—a very Fleet Foxes gesture, at once folky and arty, organic and somewhat precious.

If the opener, Wading In Waist-High Water, sounds like typical tasteful unplugged Foxes, it’s the second track, Sunblind, which suggests their sound might be headed in a slightly different direction this time. Pecknold sounds his familiar self on this warm tribute to singers departed, recent deaths like David Berman as well as influences like Elliott Smith. But the stabbing of the piano leading into the chorus is new, and the chorus itself is as close as they've come to structured pop songwriting.

Shore is the fourth album by Fleet Foxes. The first two were near-perfect batches of artisanal folk: jangling guitars, ethereal harmonies and Pecknold’s searching voice. They added a choir and strings on their ambitious third album, Crack-Up (2016), a deepening and darkening of their sound. It’s a beautiful, stormy record but, with its baroque touches and esoteric song titles (Third of May/Ōdaigahara, – Naiads, Cassadies), not outside the realm of affectation.

Perhaps Pecknold decided there wasn’t much further to explore in that direction. On Shore, he strips the Foxes’ sound down to something winsome and bright. He recorded the album himself, with the help of guest musicians like Grizzly Bear’s Daniel Raphael Rossen and Christopher Bear. None of the Foxes’ other members feature on it; as Pecknold explained in a note, the studio albums are “predominantly my work and vision”. It’s surprising to hear pronounced drums on track after track—conventional percussion has never been a Fleet Foxes staple. But it’s a positive move, the sort of opening up a well-regarded band can afford to make on its fourth album (in the late 1980s, R.E.M followed three superb, moody records with the exuberant Life's Rich Pageant).

The song lengths are back under control too—no rolling eight-minute epics—and the titles aren’t tongue-twisters. It’s the old Foxes sound, but streamlined and accessible. Whatever experimentation is there is subtle. Quiet Air has a modal breakdown at the end; Going-to-the-Sun Road has lovely elegiac horns. Young Man's Game takes advantage of the steady beat to include driving harmonies that one might not have got on an earlier album. Pecknold is in fine, relaxed form, making even the mainstream balladry of Can I Believe You memorable, stretching the ‘you’ over three or four syllables, his voice ringing high and clear like Rick Danko in It Makes No Difference.

One of the artists Pecknold mentions on Sunblind is country-folk legend John Prine, who died in April. Prine recorded a cover of his 1979 song How Lucky with Kurt Vile at the end of last year. Over a fingerpicked guitar figure, Vile and Prine trade verses, then sing one together. The track, and a cover of Pine’s Speed of the Sound of Loneliness, feature along with three other songs on Vile’s new EP, Speed Sound Lonely KV, which was released on 2 October.

Vile is a prolific singer-songwriter, with eight full-length albums and 18 EPs since 2003. His mix of indie fingerpicking and dreamy electric psychedelia has changed very little since his breakthrough, 2011’s Smoke Ring For My Halo. No other major artist today, with the exception of Canadian power pop savants The New Pornographers, has so stubbornly stuck to such a simple and well-defined sound over time. The new EP veers towards country—it was recorded in Nashville—but is still recognizably Vile, full of his tricky guitar riffs and lackadaisical, philosophical writing (“I ain’t lying/just being a little exotic”, he sings on Dandelions).

Change carries risk, of course, but in this age of reinvention, with a listening public vying to be on the cusp of the new, it’s also a surefire way to indie cred. Fleet Foxes deserve credit for tweaking their sound and producing an excellent album that’s true to their ethos. And Kurt Vile should be recognized as the modern master of not fixing what ain’t broke.

Email ThisBlogThis!Share to TwitterShare to FacebookShare to Pinterest
Labels: music