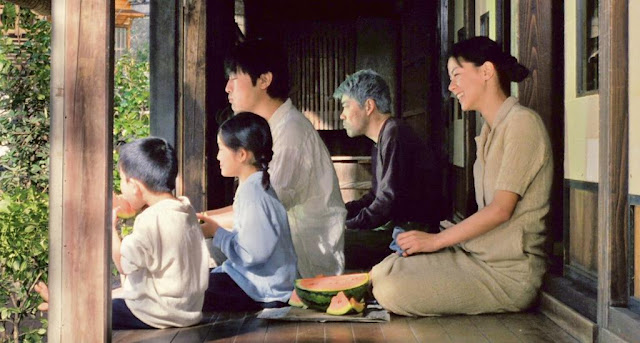 How do you assemble your own Hirokazu Kore-eda film? Start with absent fathers, or ones who think they’re doing a better job than they actually are. Add to this food, conversation, buried secrets, children in tough spots, local rituals, lots of natural light, makeshift families, more food. Garnish with humour. Set in Japan.

Of course, this is easier said than done. You can’t assemble a Kore-eda, any more than you can assemble a Wes Anderson or a Paolo Sorrentino. At best, you can disassemble him, and try and figure out why he’s so successful at recombining a few simple elements in film after memorable film (the same can be asked of his Korean contemporary Hong Sang-soo).

Kore-eda started in the early 1990s, making documentaries initially, then moving to fiction with the haunting Maborosi (1995). He was nominated for the Palme d’Or, the top award at the Cannes Film Festival, for Distance (2001) and then for Nobody Knows (2004), Like Father, Like Son (2013) and Our Little Sister (2015).

In 2018, Kore-eda finally won the Palme for Shoplifters. The film is in cinemas this week, part of a new initiative, backed by BookMyShow and PVR Pictures, called Vkaao Gems—limited releases of acclaimed international features across Delhi NCR, Mumbai, Bengaluru, Kochi, Chennai, Pune, Kolkata and Hyderabad. The film begins with a couple, Osamu (Lily Franky, a Kore-eda regular) and Nobuyo (Sakura Ando), who chance upon a young girl, alone on a cold winter’s night. They can’t go to the police; they are shoplifters, robbing department stores and running other small hustles to get by. So they take her home, and soon she’s part of the family, living in a cramped apartment with pensioner Hatsue (the late Kirin Kiki, another Kore-eda favourite), hostess Aki (Mayu Matsuoka) and Shota (Kairi Jō), Osamu’s main accomplice in robberies.

Because we aren’t told how these characters are related to each other, there’s an underlying tension to the film. It’s possible that Kore-eda’s previous venture—The Third Murder (2017), a rare excursion into thriller territory—rubbed off on this film, both in the parcelling out of information and the cold splash of the revelations. Yet Shoplifters is also warm and winsome, Franky’s goofiness nicely balancing out Ando’s reserve (the scene where they are eating cold noodles and she decides to jump him is note-perfect in its friendly sensuousness).

The questions that underpin Shoplifters are pet Kore-eda themes: What constitutes a family, and how much do blood relations count for? In Hana (2006), a samurai forms a familial unit with a widow and her young son, while the man he’s supposed to kill lives happily with another widow and her boy. In Like Father, Like Son, a businessman discovers that his child was swapped at birth with another family’s boy. He pushes them to allow the boys to swap households for a few months. Our Little Sister sees a young girl invited to stay with her grown-up half-sisters after their father dies; four half-siblings are forced to survive on their own when their mother abandons them in Nobody Knows. Two real brothers are separated in I Wish (2011)—one living with the mother, another with the father. Even in an atypical Kore-eda film like The Third Murder, there’s a scene with a daughter telling off her dad (“All of a sudden, you sound like a real father").

Perhaps the stormy childhoods in his films stem from the director’s own life. In a revealing moment in a 2005 interview to Indiewire, he responds to a question on what his own childhood was like with “Normal". Questioned further, however, he describes a hardscrabble existence, saying they were “pretty poor" and recalling the difficulties his father had in finding work after returning from three years in a Siberian labour camp. In a more recent interview, to Sight & Sound, he explained why the boy in Shoplifters carves out his own space in his closet. “The house that we used in the film is very similar to the house where I lived until I was 9…and there were six of us who used to live in that small house. So I used to live in the cupboard, and I wanted the story to be from the point of view of the boy who slept in that cupboard."

Nearly every Kore-eda film is touched by death: the passing of the father that sets the plot in motion in Hana and Our Little Sister; the killing that gives The Third Murder its title; the suicides in Maborosi and Distance; the yearly remembrance of the lost son in Still Walking (made not long after his own mother died); and the cruellest death of all, little Yuki in Nobody Knows. That’s a death toll worthy of Bergman, though the treatment couldn’t be more different. Still, it’s no wonder that sometimes he goes in the opposite direction and makes entire films that pass without a dark cloud in the sky. Our Little Sister is 2 hours of sibling chatter, near-constant eating and good vibes. And there’s the blithe Hana—the closest Kore-eda has come to an outright comedy—in which a reluctant samurai named Sōza (Junichi Okada) traces the killer of his father to a little village in 18th century Genroku-era Japan, but instead of taking revenge ends up settling down, opening a preschool and shyly falling in love. Sōza’s gradual rejection of the brutal samurai code is slyly juxtaposed with the legend of the “47 ronin", a group of samurai who happen to be hiding out in the same village, and who can’t see beyond the need for revenge.

Kore-eda frequently draws comparisons with Yasujirō Ozu, the Japanese master whose best-known films are gentle ruminations on relationships, family, life and death. Kore-eda has stated that his style is closer to that of Mikio Naruse–another Japanese legend—and British film-maker Ken Loach. What of his contemporaries? Edward Yang, the Taiwanese director of Yi Yi and A Brighter Summer Day, who died in 2007, had a similar measured pace and close observational style. There’s a less obvious comparison with Richard Linklater, who has a similar knack of filming everyday situations without affectation (Boyhood, especially, is in the key of Kore-eda). No wonder, then, that the first thing Kore-eda did after winning the Palme d’Or was fly to New York and prevail upon Linklater’s leading man, Ethan Hawke, to star in his next film.

La Verite will be the first film Kore-eda has made in another language. Besides Hawke, he has managed to rope in French cinema royalty in Juliette Binoche and Catherine Deneuve. Steven Spielberg, another chronicler of absent dads, has bought the rights to Like Father, Like Son. If you’re wondering what all the fuss is about, you can start with Shoplifters this weekend.

This piece appeared in Mint Lounge.
Posted by a fan apart at 10:05 AM