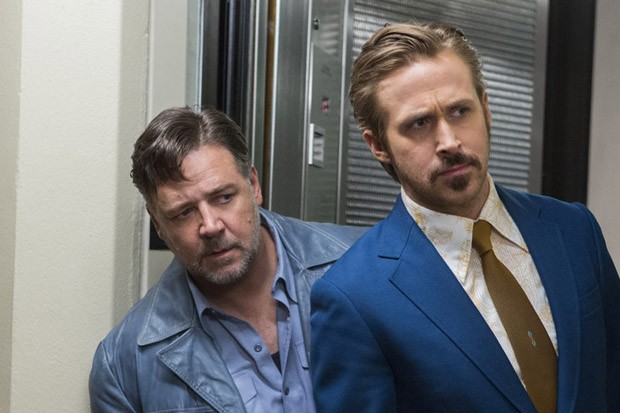 The Nice Guys is in the vein of The Long Goodbye and Inherent Vice, two brilliant films about private investigators in 1970s Los Angeles, even if it isn’t in their class. Shane Black’s film has nothing that approaches the ruefulness and stoner paranoia of Inherent Vice or the savageness of The Long Goodbye. If, however, you’re looking for nothing more than a fast, profane, aggressively silly comedy with neo-noir touches, The Nice Guys gets the job done.

Like Black’s feature debut, Kiss Kiss Bang Bang (2005), The Nice Guys celebrates the hard-boiled tradition even as it pushes it to satirical extremes. Both leads are warped versions of Raymond Chandler’s man who goes down mean streets “but is not himself mean”; they might cheat widows and kill the odd mobster but they’re essentially nice guys compared to the super-seedy LA environs they operate in. Noir fans will enjoy seeing Crowe, greyer and portlier now, reprise his blunt instrument act from L.A. Confidential; Kim Basinger, playing Amelia’s mom, might have been cast to further audience association with that film. But The Nice Guys belongs to Gosling, who conveys his character’s agitation with a straight face, while also displaying a surprising feel for slapstick comedy.

This review appeared in Mint.
Posted by a fan apart at 2:30 AM