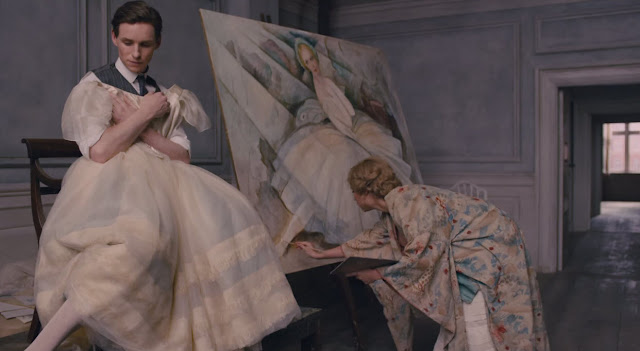 Einar Wegener (Eddie Redmayne) is living what appears to be a satisfying life. He’s a known landscape painter, well-regarded on the 1920s Copenhagen art scene, and has a lovingly charged relationship with his wife, Gerda (Alicia Vikander), also a painter. Indeed, the only signs that something might be roiling beneath the surface is when he casts nervous glances at frilly dresses. Later, he models stockings and heels for his wife, and one can clearly see the impact it’s having on him. Before long, Einar’s secret is out: He likes to dress up as a woman.

Once she finds out, Gerda indulges what she assumes are Einar’s fetishes. She paints several portraits of her husband in dresses and make-up, which bring her a measure of fame. She even encourages him to appear as Lili, a fictional cousin, at a party. These deceptions are successful, but to Gerda’s dismay, after a while Einar cannot turn Lili on and off. Once he’s lived the life he believes he was meant to—that of a woman—he can’t go back to being a husband and a man. Which leads to a historic moment: one of the first gender-reassignment surgeries, in which Einar’s male parts are replaced by female ones, so that he is able to truly live as Lili.

The Danish Girl is based on a 2000 novel of the same name by David Ebershoff, a fictionalized account of Lili and Gerda’s true story. Lili’s gender change in 1931, chronicled in her book Man Into Woman, made her an LGBT icon in the years following her death, and it’s perhaps inevitable that a film on her life would be made and released at the height of the awards season. Tom Hooper’s adaptation is the kind of work one might politely call 'mannered', or, not so politely, Oscar-bait. The silences are calculated to the millisecond. The emotions are so programmed that there’s hardly room to breathe. Everything is pretty and perfect and touching. All that’s missing is life itself.

This may seem like an unfair charge against a film that treats a subject like gender confusion with great sensitivity. But it’s this sensitivity that suffocates the scenes, especially if you contrast it with something like Xavier Dolan’s Laurence Anyways, another film about a man who knows that he is actually a woman. That film is everything The Danish Girl isn’t: rude, messy, provocative, frustrating, moving. And it’s not just the way the scenes in Hooper’s film unfold, it’s how they look. Mike Leigh’s Mr Turner—another recent period film about a painter—managed to convey the beauty of its landscapes and the experience of brush on canvas with infinitely more feeling and energy.

By the end, with Lili getting her coveted, though ultimately fatal, surgeries and Gerda providing vital support, the film becomes a succession of whispered lines and artful silences. I knew that I was supposed to be moved, to appreciate the pathos of Vikander and Redmayne’s performances. Instead, I felt like the film’s protagonist—trapped, and eager for release.
Posted by a fan apart at 10:25 PM