Ida: A Jewish nun and a Stalinist judge walk into a bar… 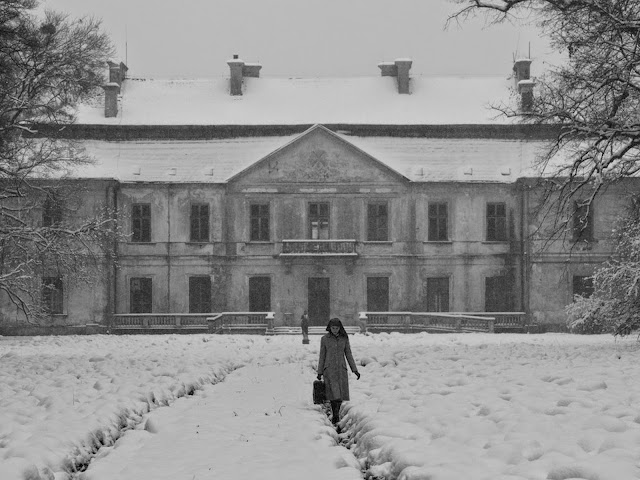 The Kinoteka Polish Film Festival, organised by the Polish Institute at India Habitat Centre in New Delhi, will feature such heavy-hitters as Andrzej Jakimowski's Imagine and the first four episodes of Krzysztof Kieślowski's The Decalogue. Still, the attention of the city's cinephiles will most likely be focussed on Paweł Pawlikowski's Ida. The film, shot in wintry black-and-white, tells the story of Ida, a nun who learns she's actually Jewish from her aunt, Wanda, a former hanging judge fallen on bad days. The two women set off on a road trip to recover fragments of their family's past. The film made a substantial splash on the arthouse circuit this year, landing a spot on Sight & Sound's "Best Films of 2014" list and becoming Poland's official entry to the Oscars [Note: It went on to win].

This is the first time you've made a film in Poland. Was this something you wanted to do for a while?
The time was right to go back to Poland — to make a film there. It's something to do with where you are in life; right now, I'm looking back in time, and looking at essential things — life and death and roots and faith. I don't think I was ready to make that film earlier. When you look at films I've made, they tend to be about whatever's on my mind at that time, so it's not that I have a career plan that I'm going to shoot a film in Poland or go shoot a film in Hollywood, God forbid.

You've written about how you tend to prefer an outline to a detailed screenplay.

Yes, but also, I just don’t think screenplays are any good. I read screenplays, I write them, and I always have the feeling that this isn’t cinema, that this is just a rough roadmap, and a lot of scenes are just there to explain stuff and get me from A to B. I’m the opposite of Hitchcock in that way. It’s not that some magic happens on set. You have to prepare the film really, really well, and for years. And you have to write some kind of screenplay. The more you write, the deeper you get into things, the more you eliminate weak things – literary things – the better. 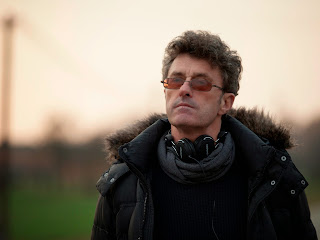 I find the groundwork is key, not just the screenplay but immersing yourself in that world. Researching, spending time gives you a sense of depth and roots in your subject — living with the thing for years, that's important. So when the filming starts, you're armed, with some stuff that's on the page, and some stuff that's in your subconscious. Everything should feel organic, and the only way you can get that is when you don't feel the manipulation, no matter how manipulated the whole thing is. And the only way to achieve that is if you have the freedom and talent for shaping things: not panicking and not shooting something just because it's in the script — just having the attitude of a sculptor who keeps sculpting away till the thing is finished.

Was it an aesthetic decision to shoot in black-and-white?
The decision now seems straightforward but at the time there were many reasons for it. It just felt right to do a film that was set in the early '60s in black-and-white and in the 4:3 format, because that's how I remember films from that time — and how I remember the world even, because I only remember the world from films. But also, our family albums of that time were also black-and-white, so my idea of that time was certainly black-and-white, and framed strangely. But when I was doing it, I realised that it was also something to do with the desire to make that world a little more removed from reality, make it a little more abstract. I wanted the viewer to experience the film as a kind of meditation, and the less stimuli you have — colour, movement — the more it becomes a meditation.

The film touches on the persecution of the Polish Jews during the Second World War, but there are no explicit history lessons. Do you prefer to suggest rather than underline themes?
That's absolutely crucial. For me, all good art is about creating characters and landscapes rich in themes, but which don't just stand for any one theme. And I like dialogues from life — people don't always say what they mean, they don't always explain stuff, just for the sake of some dumb audience; they talk the way they talk, full of ambiguity and paradoxes and incoherence. And if you can find poetry in that, great, because it will resonate much more, whereas films where the very shape of the story tells you what to think, where people's dialogues are explaining what they feel, where the music tells you what they feel — that's the majority of cinema, let's face it, but for me, that's not interesting. I watch it, and it washes over me. I watch it with pleasure sometimes, but I won't remember it half an hour later. The film that gets under my skin has to be a little bit more indirect and make me imagine things and experience the world in all its complication and reality.

You employed the 4:3 "Academy ratio". As a result, there's an unusual amount of space above the characters' heads...
It started quite innocently. I realised in rehearsals that this square format is really good for faces and portraits, but it's not great for landscapes. So then, for argument's sake, I just tilted the camera up to see what would happen if we didn't frame it a normal way. And it works, it felt intuitively right. Later, I realised it felt right because there's a vertical dimension to this film — and since then, a lot of critics have written about the presence of God or the absence of God or the absence of millions of people who disappeared in the war. Critics do what they do, but it started with: "How can we make this shot more interesting?" 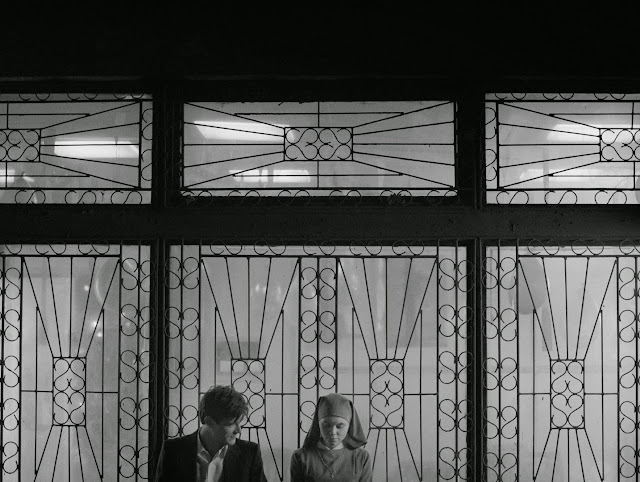 You worked with a new cinematographer, Lukasz Zal, on this instead of your regular DoP, Ryszard Lynzewski.
[Lynzewski] didn't agree with where this film was going. He dropped out very early on, so I had to shoot with a camera operator who'd never shot a film in his life. Lukasz started as the operator, and after practically the first day, he became the DoP. Of course, the framing and everything is very much my conception, but he got it, and he liked the risk involved — he had no reputation to lose, and he went as far as we wanted, so it was a pleasure working with him.

It's remarkable, especially in the context of today's cinema, to note the stillness of so many of the scenes in Ida. And yet, there's a tension within this stillness...
There's a lot of tension anyway in the film, so you can afford to be understated and still. I hope that there was tension and mystery and some kind of beauty — that it wasn't like watching paint dry. In a way, the film was kind of dictating what was right. If the framing is wrong, if the lighting is over-elaborate, if the sound is too much, the film will reject it. All you have to do is listen to your own film.

It is also, given the subject matter, a strangely funny film.
Poland is a strangely funny country. People are quite acerbic and witty in Poland. Also, the very situation is kind of bonkers, a nun and a Stalinist judge going on the road together is really quite funny. So yes, there's a sense of the absurd. And Wanda has a sharp tongue — her sense of humour is inherited from my father. Some of the lines I gave her are directly from my father.

Jazz was crucial to several Polish "youth films" in the '60s. Did that guide your use of it here?
All the music in the film is music I love, so it wasn't an intellectual choice, really. There's a mixture of lively music — some of it was the pop music of the early '60s, hillbilly rock and Italian-style kitsch music, which Poland was full of then. That was the music you'd hear on the radio then.

The jazz was more ambitious music — it started in the mid-to-late '50s. Poland became the capital of jazz in Europe. Jazz was banned in other countries, but in Poland it was allowed. Komeda, Namyslowski, Przybielski, Stańko — a lot of really, really great musicians came through. Coltrane was a huge influence, and "Naima" is one of my favourites, and in the scene [with Ida and a saxophone player who fancies her] it's a way of making her fall in love with him, not as an individual but as a cloud of associations.

What led to you to cast Agata Trzebuchowska, who'd never shot a film before, as Ida?
I am usually very open-minded about casting anyway. In My Summer of Love, I cast two young girls, Emily Blunt and Natalie Press, and Emily went on to be a well-known actress. [Agata] was just a girl, you know, she just felt right for the part. It wasn't like a big design, it's just that I couldn't find a good Ida for a long time among professional actors, so I ended up using a girl who we found at a café, who didn't want to act and still doesn't want to act, and whose refusal to act was just perfect. She doesn't believe in God at all, but in her atheism she's so coherent and calm and principled that it just felt like she's much closer to somebody who's deeply religious than girls who were telling me, "Ah, we always wanted to play nuns all our life." 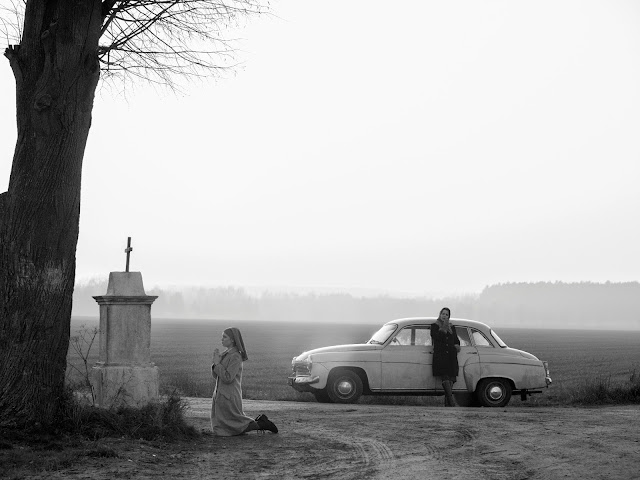 This piece appeared in The Sunday Guardian.
Posted by a fan apart at 11:04 PM