The hastily written review that follows does little justice to this film. If it's being screened or becomes available on DVD, grab at the chance to see it.

Who, the vast majority of audiences might ask, is PK Nair? Why is there a film on him in theatres? And why do Shyam Benegal and Adoor Gopalakrishnan, Mrinal Sen and Basu Chatterjee consider him to be a legend? The answer is as unlikely as it is true. PK Nair created Indian cinema history. He did this not by directing or producing or acting in or writing about films. He simply collected the reels and stored them for future generations to see. If today we can view the surviving fragments of Raja Harishchandra, India’s first-ever feature, it’s because of him. And, that’s just one of 12,000 odd reels he collected for the National Film Archives, that great repository of Indian cinema.

Shivendra Singh Dungarpur’s Celluloid Man is a tribute to Nair’s life work of archiving film. For this 2012 film, Dungarpur conducted interviews with dozens of Nair fans, from Naseeruddin Shah to Rajkumar Hirani to Girish Kasara­valli. He also waited 11 months to speak to the man himself, eventually shooting him in elegiac black-and-white on the Film Archive’s premises. One might assume that a two-and-a-half-hour film consisting solely of talking heads and grainy clips might be dry and academic. On the contrary, this is likely to be one of the most moving films you’ll see this year. The cumulative effect of watching legend after legend appear and attest to Nair’s zeal, gruff generosity and passion for cinema is heart-warming, and more than a little inspiring.

Nair turned 80 this year, and hasn’t been in the greatest of health. He’s a legend at the Film and Television Institute of India – the place he began his career at in 1961, but is largely unknown outside it. But for Dungarpur’s efforts, it’s a very real possibility that Nair’s contribution to Indian cinema might have remained an obscure legend, discussed only by those who know the man. Celluloid Man rights this wrong in the most emphatic way possible. It shines a deserving spotlight on a life in cinema. 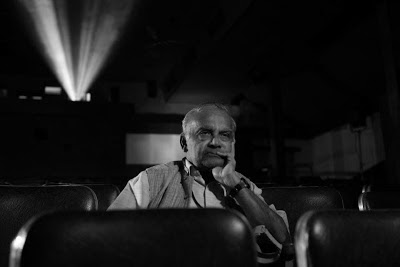