As Total Recall unfolds, you may be reminded of Christopher Nolan’s Inception, the Wachowskis’ The Matrix, The Bourne Identity and Eccentrica Gallumbits, the triplebreasted whore of Eroticon Six from The Hitchhiker’s Guide to the Galaxy. You may also remember a better film with the same name from 1990. But the story really begins with a 1966 sci-fi short story by Phillip K Dick. It was called “We can remember it for you wholesale” and was about a clerk called Dennis Quail who finds out – after visiting a company
called REKAL that implants artificial memories – that he used to be an assassin for the government.

The first screen adaptation, directed by Paul Verhoven and starring Arnold Schwarzenegger, changed Quail’s name to Quaid and expanded on the original plot. It was, like most ventures Verhoven, borderline-kitsch and enjoyable. Now it’s been remade and, like the Planet of the Apes reboot last year, they’ve taken the fun out of the original. Director Len Wiseman (Underworld) tries to give the film a reason for existing by working in an easy-tospot political subtext. Quaid (Colin Farrell) finds out that his former handlers are about to invade another country with the pretext of rooting out a terrorist, but with the actual intention of exploiting its land resources. Obama’s into his second term, but Hollywood’s still finding inspiration in the Bush era.

So you’re either with Wiseman & Co, or you’re against them. It’s easier to be against. Total Recall is slick but joyless: the production design has an airless, computer graphic quality, the action sequences, for all their trouble, seem like something out of a video game. The only bright spot is an unhinged Kate Beckinsale (star of Wiseman’s Underworld and Underworld: Evolution and also his wife) as a government agent who spends the first half hour pretending to be Quaid’s wife and the rest of the movie trying to kill him. Don’t be swayed by the perfunctory special features: there’s a session with theoretical physicist Michio Kaku which explores the movie’s science; a short look at the designing of “The Fall”, an elevator down the earth’s centre; and a gag reel, which, unlike the film – in which he’s a villain with a bad haircut – allows the talented Bryan Cranston a chance to display his range. 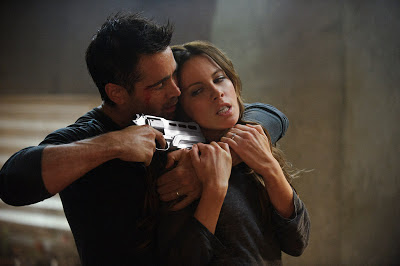