The first thing to keep in mind is that Nosferatu released in 1922. This means the German public had just been given a mighty scare off-screen, and would receive a series of shocks for the next two decades. Onscreen scares had not been invented yet, but FW Murnau would change all that. Though some might cite The Cabinet of Doctor Caligari or The Golem, both released in 1920, or even 1913's The Student of Prague, it is actually Noseferatu which should qualify as the first horror film ever made. (It beat the Swedish faux-documentary Haxan, a scarier affair, by a few months.) It was also the first vampire movie, which makes Murnau the earliest – and unlikeliest – cinematic ancestor of the Twi-hards.

Murnau was one of cinema’s great early poets. He would go on to direct The Last Laugh, Faust, and the most lyrical of all silent films, Sunrise. Nosferatu was his first classic; an adaptation of Bram Stoker’s Dracula. Apart from a few minor changes – the count was called Orlok, Harker was changed to Hutter – the film was to a large extent faithful to its source. Hutter is a real estate agent who visits Orlok’s castle in the Carpathian mountains. After some broad hints, it dawns on him (here begins the horror film tradition of the slow-witted pretty boy protagonist) that his host is a nosferatu, or a vampire. The rest of the movie is a mish-mash of fangs, ghost ships, rat plagues and women in ecstasy (the vampire as seducer: another genre staple born). 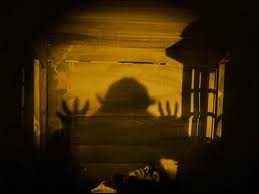 Is Nosferatu still scary? Ninety years of films that bump in the dark later, the answer is no. There are a few creepy moments – you just know Tim Burton loves that shot of Orlok’s shadow menacingly advancing towards a wall face – but the greater shock today is the openness with which Murnau pushes the psychosexual aspects of the story (unlike the 1931 Dracula starring Bela Lugosi, Nosferatu does not shy away from showing Orlok suck the blood from Hutter’s thumb). This was the only element that Hollywood did not – or could not – borrow wholesale from the Germans for their own horror films of the 1930s. In every other way, German expressionism formed the basis for what we now regard as the golden era of horror.

A minor gripe about this particular edition of Nosferatu. Viewers might be surprised to find that the film isn’t in black and white at all; instead, scenes have strong yellow, pink and blue tints, an early cinema trick to alert audiences to changes in time and mood. Noseferatu was released in this form, but then the original print went missing. In 1984, the “colour” print was discovered and restored, followed by two other versions in 1995 and 2005 (the latter is on view here). Film buffs might have welcomed nuggets like this, but the bare-bones DVD pack, like the film, is silent on these matters. 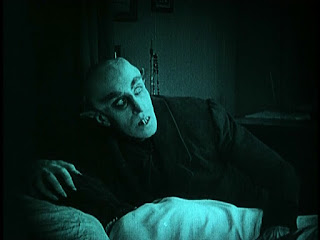 A version of this review appeared in Time Out Delhi.
Posted by a fan apart at 6:18 AM