One of the happy triumphs of Barfi! is the way it manages to avoid becoming a “message film”, even though one of its protagonists is deaf-mute and another autistic. Our films – even sensitively handled ones like Black and Taare Zameen Par – tend to use disabled characters as a sort of censorious mirror reflecting society’s biases and indifference. Barfi!, on the other hand, sticks close to its characters, treating them like real people, not issues to be resolved.


Barfi (Ranbir Kapoor) is a young man-about-Darjeeling. He cannot hear or speak, but is otherwise well-adjusted: cycling around, flirting and troubling the local cops. He falls for Shruti (Ileana D’Cruz), and despite her protestations (she’s engaged), woos her like a regular Charles Chaplin. At the same time, Jhilmil (Priyanka Chopra), the autistic daughter of a local businessman, re-enters his life. As the story unfolds in an intricate series of flashbacks, we watch these three characters chase each other from Darjeeling to Calcutta and back, with Saurabh Shukla’s harried police officer a constant step behind. There’s kidnapping and attempted robbery and even a murder, yet the film never loses its whimsical tone.

Maybe it was the mountain air, or the fact that he’s a Bengali director finally getting to shoot in Bengal, but Barfi! seems to have released something joyful and buoyant in Anurag Basu. Unlike the pessimistic narratives of his previous two films, Life in a... Metro and Kites, this one glides along like classic silent comedy. Kapoor adds to this impression, with a performance so light on its feet it makes everyone else seem like they’re trying too hard.

One might fault the director for introducing a plot coincidence too many. One could criticise the theft of certain silent movie standards, like the handsy marionette, or the piece of paper that won’t get unstuck. After a while though, it might be easier to just sit back, relax and surrender to Barfi!’s varied charms. There’s Pritam’s music, appropriately sunny and eccentric. There are the committed performances, not just by Kapoor, but also Chopra, Shukla and Akash Khurana as Barfi’s dad. There’s the cinematography by Ravi Varman, who performs small miracles, shooting through trees and off reflected surfaces. And there’s Darjeeling in the ’70s, a picture postcard simulation of an age when people actually sent postcards. 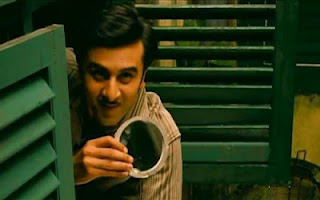 Postscript: Was disappointed to hear that one of Barfi!'s scenes is a straight lift from The Notebook, and another one from the Japanese film Departures. It's easier to explain away the silent film borrowings, not so much these.
Posted by a fan apart at 2:54 AM