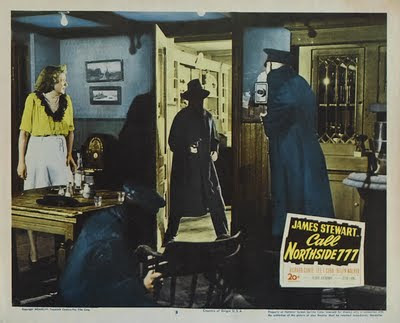 This 1948 film begins documentary-style, with grainy footage of Chicago’s streets and a portentous voiceover informing viewers about the crime wave that hit the city in 1932. The conceit isn’t kept up long; after those first few awkward minutes, Call Northside 777 settles down into a more conventionally satisfying whodunit, albeit with one important twist. The crime in question has taken place eleven years ago, and the two men sentenced to life imprisonment are innocent.

That much we gather from the first of five minutes. The rest of Call Northside 777 details the efforts of PJ McNeal, reporter for the Chicago Times, to help free the two men. Like every other Hollywood newspaperman of the time, McLean (James Stewart) starts off cynical but is eventually won over by the faith shown by the imprisoned Frank Wiecek (Richard Conte) and everyone who knows him. He starts piecing together the case again, and finds, like the real-life case this movie is based on, that it is full of holes.

Call Northside 777 is methodical to a fault, but Stewart’s performance, with its subtle transformation from bystander to crusader, is skilful enough to keep the viewer involved till the end. Lee J Cobb also does well, playing McNeal’s editor in his usual grouchy style. There’s hardly any score to speak of, unusual in a film from that time (maybe it was assumed this would extend the documentary motif). Joseph MacDonald contributes some top-drawer noir camerawork – plenty of shadows and just enough light to illuminate a silhouette. Director Henry Hathaway’s films, often uneven, have tended to produce some striking performances – John Wayne in True Grit, Richard Widmark in Kiss of Death. Stewart’s may the best of the bunch, and is the primary reason why one ought to see this film.