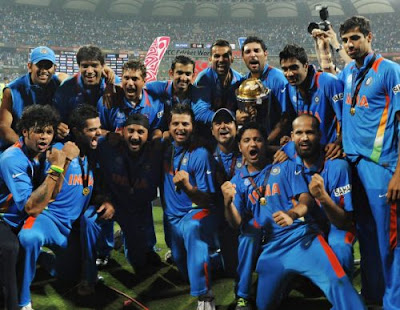 And a shout-out to those without whom this would not have been possible:
Sourav Ganguly and John Wright, who built India's most competitive team, on whose foundations this team was built
Rahul Dravid, who donned gloves during the 2003 Cup, not because he was a wicket-keeper but because his country needed him to
VVS Laxman, still the most underappreciated cricketer in this country, and with as big a role as anyone in India being the number one test team
Anil Kumble and Javagal Srinath, who bowled their hearts out for years on flat pitches
Ajay Jadeja and Robin Singh, templates for future Indian ODI players
Mohammad Kaif, whose death-or-glory dives in the Natwest Final are branded into every Indian cricket fan's brain
The Class of '83, whom no one gave a chance
Posted by a fan apart at 11:37 PM