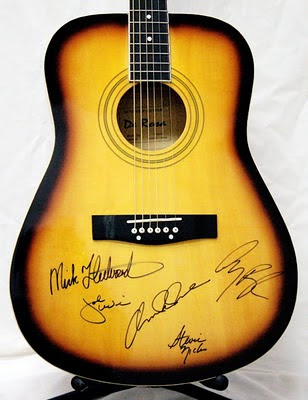 We’ll start with the riffmeisters because rock ‘n’ roll is, when you get down to it, a guitar riff. Chuck Berry is king of this castle. Keith Richards is his queen (queen bitch?). Courtiers include Angus Young, Johnny Ramone. Jack White guards the gates.

The innovators. Bo Diddley. Link Wray, for “Rumble”. Lou Reed. Tom Morello. Hendrix could just as easily be here, but then there’s hardly any category he that wouldn’t fit into.

Servants of the song. First and foremost, George Harrison, whose contributions, whether spectacular or not, were always apt. Roger Squire. Mick Jones of The Clash. Lindsey Buckingham. The Edge.

The savage. Bruce Springsteen. Paul McCartney, which can only come as a surprise to those who haven’t cottoned on to the fact that every jagged, bordering-on-losing-control Beatles solo (“Taxman”, “Sgt Pepper’s Lonely Hearts Club Band”, “Good Morning Good Morning”) is his. Dave Davies, because no single till this day has sounded as savage as “You Really Got Me”.