What is it that drew Francois Ozon, director of sensual character studies like Water Drops on Burning Rocks and Swimming Pool, to romance novelist Elizabeth Taylor? Angel, his first English-language feature, is based on her novel of the same name and set in Edwardian England. Angel Deverell starts the movie as schoolgirl who dreams of becoming a writer. A couple of reels and one sympathetic publisher later, her dream is on its way to being fulfilled. The only problem is that by now everyone dislikes her – the other characters, the audience, and most surprisingly, the film itself.

What do you do with a lead character who is self-absorbed, shallow, vain, manipulative and melodramatic? Liking her is out of the question, though one might have respected her if she had talent to back her spunk. However, even here the film seems to suggest that she’s little more than a hack. Still, the camera refuses to leave her. She’s in almost every frame, the undeserving cynosure of everyone’s eyes. The more we will the movie to dig deeper – to explain her motivations and give us a reason to sympathise – the more it pushes its Mills and Boons agenda. 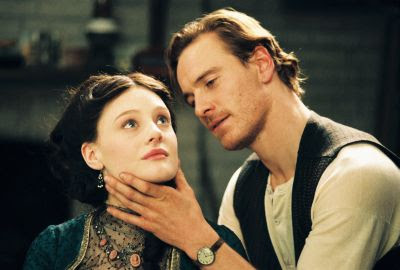 The cast does their best – a quiet Sam Neill as the publisher, a wasted Charlotte Rampling as his wife. Michael Fassbender, playing her love interest, has a cruel glint in his eye reminiscent of a young Daniel Day-Lewis. Ramola Garai, meanwhile, has the thankless job of playing a lead character who, as she admits in the cast interview included as a bonus feature, is far from admirable. She tries hard, but it’s a losing battle, what with her own film setting her up from the beginning.

A version of this review appeared in Time Out Delhi.
Posted by a fan apart at 11:53 PM