Me Tarzan, you censor 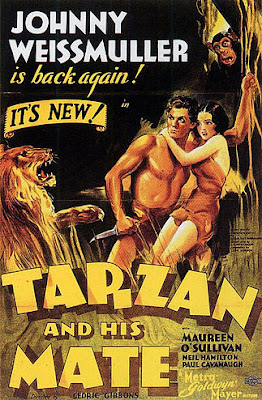 Before the Motion Picture Producers and Distributors of America (MPPDA) imposed the moral strictures of the Hays Code, American films often included material that was risqué for the time. Tarzan and His Mate (1934) is one of a handful of films that epitomize ‘pre-Code’ Hollywood. The second film in the Tarzan series, it was directed by Cedric Gibbons and starred, like the first film and 10 others after it, former swimming champion Johnny Weissmuller. Playing opposite him as Jane was Maureen O’Sullivan, who spends most of the film in a thigh-baring loincloth. This garment might have incited a minor controversy had there not been another, larger issue for everyone to get riled up about.

The provocation was in the form of a skinny-dipping scene. For two-and-a-half-minutes minutes, Tarzan (in a loincloth) and Jane (in nothing at all) perform graceful underwater manoeuvres. O’Sullivan didn’t perform the scene—she was replaced by Olympic swimmer Josephine McKim. Weissmuller and McKim, both former Olympic gold medallists, display a balletic fluidity. With dappled sunlight filtering through the lake, the scene is anything but prurient. Nonetheless, it proved a step too far for the 1930s, and the Hays office, which had just begun to apply the Code rigidly, swooped down.

This wasn’t the first nude swim in a Hollywood movie. There was a brief scene with Clara Bow in Hula (1927), and Dolores del Río swum nude in Bird of Paradise (1932). But O’Sullivan and Weissmuller were stars, the first Tarzan movie had been a hit, and the MPPDA wasn’t going to let an extended nude scene play in theatres. Joseph Breen, director of public relations of the MPPDA, reported in a memo to the organisation’s president, Will Hays: “The man in the shot wore a loin cloth, but a critical examination of the shot indicated that the woman was stark naked. There were four or five shots of the woman, which the jury referred to repeatedly as ‘frontal’ shots, which showed the front of the woman’s body.”

Though the scene was ordered to be removed from all prints of Tarzan and His Mate, some US territories that had no censor boards included the nude swim. According to film historian Rudy Behlmer, MGM released three different versions of the scene: one in which Jane is fully clothed, one topless and one completely naked. When this was discovered, the scene was ordered to be removed from the film’s negative. It survived in the master positive print, though, and was reinserted when the film was released on home video.

This appeared in Mint.
Posted by a fan apart at 7:08 AM