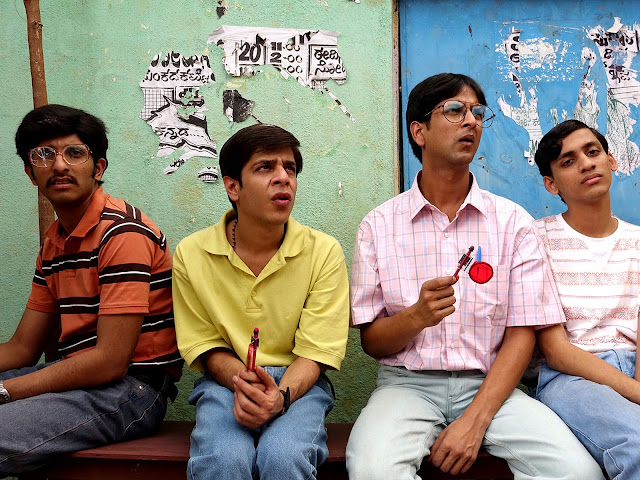 A. The Turn of the Screw

Both the question-answer device and the deliberately juvenile joke are inspired by Brahman Naman, a comedy about three college-going boys in Bangalore whose lives revolve around sex. Or, more accurately, their lives revolve around not having sex, and very wanting much to. They’re waiting for their turn, and it isn’t pretty. The opening scene of the film is a written title, which describes the male teen as a disastrous “genetic experiment”. It’s a canny stratagem by Q and screenwriter Naman Ramachandran: get the disclaimer out of the way, then go ahead and be as puerile as you like.

This may be a comedy about young men desperate to lose their virginity, but it’s no American Pie. Instead of giving the audience a token good-looking protagonist or a goofily adorable one, Brahman Naman has three intentionally unappealing leads. Naman (Shashank Arora), Ajay (Tanmay Dhanania) and Ramu (Chaitanya Varad) are gawky, superior, insular and casteist. They’re on the quiz team, and their accumulated arcane knowledge spills over in their daily conversation: trivia as a defence mechanism, a shield. One might have felt for them, if they weren’t so damn unpleasant.

Q is nothing if not an envelope-pusher. Here, he adds the following rather dubious achievements to his résumé: a character vomiting up close to the camera, then laying his head in it; masturbation by fridge door, fan and fish; and a remarkably distasteful scene that, had it progressed, would have bordered on rape. The point behind these shenanigans seems to be to show up the ugliness of the Indian male. The few actual female characters—as opposed to the ones that are pure male fantasy—come across as appealing, intelligent and frank about their desires. Which, of course, is too much for our stunted trio to handle.

The film did crack me up intermittently. The writing, when it isn’t going for the easy laugh, is acidulously clever. Though most scenes are shot at a weird tilted angle, Q and Siddhartha Nuni (they share a cinematography credit) and art director Tabasheer Zutshi do manage to give us the impression we’re watching something set in the 1980s (it reminded me of In Which Annie Gives It Those Ones, another English-language Indian film about college students, set in the 1970s but made in the ‘80s). What drove me to distraction, however, was the constant, aggressive stupidity—the feeling that no gag was too ridiculous, no double entendre too tawdry, to merit inclusion. In a way, Brahman Naman is just a much smarter Grand Masti, wearing its crudity and its limited world-view like a badge.

With the release of Gandu in 2010, Q seemed to emerge as that rare figure in Indian cinema: someone whose provocations were genuine. With Brahman Naman, his desire to shock is evidently intact, but as far as Q films about sexual mores go, I much preferred his documentary Love in India, which was less schematic in its boldness and more insightful about our hang-ups. Brahman Naman should have no difficulty finding an audience when it releases on Netflix next week. Yet, there’s some irony in the fact that its likely champions—young males in their teens and 20s sent into splits by the sight of a penis—will be the same demographic the film’s critical of.
Posted by a fan apart at 7:01 AM