The Ninth and the World

Earlier this week, the first of the Syrian refugees arrived in Germany. In many places, the local populace turned up to welcome them. There’s a short report from the Munich railway station that you can stream on the BBC’s Facebook page. As the visibly weary travellers stream out, the crowd claps and cheers. The refugees wave back, a little boy hands out sweets. Then, off-camera, someone starts singing in German.

The words are from An Die Freude, by German poet Friedrich Schiller. The English-speaking world knows it as Ode To Joy, immortalized as the instantly familiar finale to Beethoven’s Ninth Symphony. That some unseen man decided to sing this for refugees is both extremely moving and entirely appropriate. Time and again, Ode To Joy has popped up at key moments in history, providing a soundtrack for vastly different political and social movements.

An Die Freude was written in 1785. Even divorced from Beethoven’s choral arrangement, Schiller’s ode sounds blissed-out in its English translation. “Joy, thou beauteous godly lightning/ Daughter of Elysium/ Fire drunken we are ent’ring/ Heavenly, thy holy home,” it begins. It continues in the same vein, but underneath its swoony surface is a political charge in its call for equality and brotherhood, found in lines such as “Every man becomes a brother” and “Let our book of debts be cancell’d”.

Beethoven was an admirer of An Die Freude, as indeed many German personae of the arts at the time were; the poem had been set to music a couple of times before Beethoven got to it. We know, from a letter written by one Bartholomäus Ludwig Fischenich to Schiller’s wife, that he intended to set it to music as far back as 1793 (“I expect something perfect for as far as I know him he is wholly devoted to the great and the sublime,” Fischenich wrote about the composer). The adaptation finally happened with the Ninth Symphony. 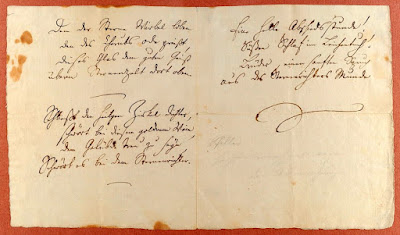 Schiller revised the text in 1803; it was from this version that Beethoven chose three choruses and three verses and fashioned one of the greatest symphonic movements. It begins once the baritone soloist hears the dissonant fanfare that opens the final movement and sings, “Oh friends, not these sounds! Let us instead strike up more pleasing and more joyful ones.”

Few works of art are as deserving of the descriptor “universal” as the finale of Beethoven’s Ninth. And it is this universality that has allowed so many diverse ideologies to see their ambitions reflected in it. Since its premiere on 7 May 1824 in Vienna, its messianic power has been admired and utilized across the political spectrum. Nationalists in early 20th century Germany revered it, but so did the socialists; Kurt Eisner, who organized the overthrow of the monarchy in Bavaria in 1918, described it as the “welthymnus (world anthem) of the Ninth”. In Beethoven’s Ninth: A Political History, Esteban Buch and Richard Miller mention how, as France and Germany clashed in World War I, “two nationalist Beethovens found themselves standing face to face on the battlefields”.


In his provocative, fascinating film, The Pervert’s Guide To Ideology, cultural critic Slavoj Žižek points to the “universal adaptability” of Ode To Joy. He mentions how it was almost a communist song in Soviet Russia; how it was used to mark big public events in Nazi Germany (including Hitler’s birthday in 1937 and 1942); how it was one of the few pieces of music that didn’t get banned during the Cultural Revolution in China. In Rhodesia, the tune (with altered lyrics) was adopted as the national anthem, resulting in Ode To Joy performances becoming extremely controversial once apartheid was abolished and the country became Zimbabwe.

It could function equally well as a symbol of hope and brotherhood. In a Chile chafing under Augusto Pinochet’s brutal rule, Death And The Maiden author Ariel Dorfman wrote, “We sang, over and over, the Ode To Joy from Beethoven’s Ninth Symphony, the hope that a day would come when all men would be brothers”. It was played by protesters at Beijing’s Tiananmen Square in 1989. In post-World War II Germany, the tune carried with it the stigma of its Nazi patronage, until a remarkable cleansing occurred. In December 1989, to celebrate the fall of the Berlin Wall, Leonard Bernstein conducted two concert performances, one in East Berlin, the other in West Berlin. The piece chosen was Ninth Symphony, with one little alteration: freude (joy) was replaced by freiheit (freedom).

Perhaps the strangest instance of Ode To Joy’s cross-cultural assimilation has been in Japan. Every New Year’s Eve, thousands of Japanese sing the German lyrics to the song they affectionately call Daiku—the number 9. Some say the song caught on there during World War I, when German prisoners of war staged a performance of the Ninth. Alternatively, it was suggested in The New York Times that the craze began in the years before World War II, when Daigoro Arima, conductor of Japan’s only significant orchestra, returned from his studies in Vienna and brought with him the practice of playing the Ninth on New Year’s Eve. Whatever its origins, it has become a holiday tradition there, to the extent that a 10,000-strong Number Nine Chorus gathers every year in Osaka to perform it.

Is Ode To Joy, as Žižek has argued, an “empty signifier” that can stand for anything? That it’s infinitely malleable is beyond dispute: What other piece of music could serve the markedly different purposes of Andrei Tarkovsky’s Stalker, Stanley Kubrick’s A Clockwork Orange and the Die Hard series? We may never find out why our unknown singer in Munich decided to use it as shorthand for his feelings at that moment. Maybe it was because the tune has been the European anthem since 1972. Perhaps he thought the line “Alle menschen werden brüder (Every man becomes a brother)" was appropriate. Or, just maybe, he was hoping that there would be a few among those who had just arrived in a strange land who recognized the tune and felt more at home.

This piece appeared in Mint Lounge.
Posted by a fan apart at 2:42 AM