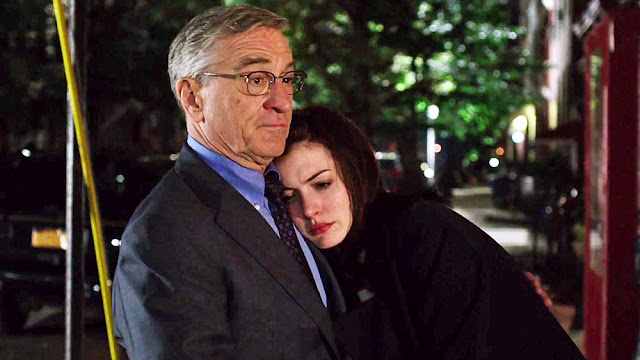 You have to love actors who commit to mediocre films. By investing in the material and never letting on that they know it’s terrible, they allow us, if only for a moment, to connect with it as well. Something like this happened during The Intern. The commitment did not come from Robert De Niro, who’s barely doing anything at all. It was displayed by his co-star, Anne Hathaway, who gives this sentimental comedy-drama by Nancy Meyers a deep and surprising emotional charge.

Ben (De Niro) is a sprightly widower in his 70s looking for something to do. He comes across a flyer advertising an opening for senior citizen interns at a web-based clothing company. Soon, he’s hired and finds himself in the position of personal assistant to the company’s founder, Jules (Anne Hathaway). Perhaps to dilute the outlandishness of its central premise—a 70-something man interning for a 30-something new age-y boss—the film immediately serves up a slew of familiar clichés. Jules is Hollywood’s idea of a woman boss: perpetually stressed, obsessed with minutiae, unable to balance home and work. And Ben is a throwback, a “real man”, “the last of a dying breed”. In case that wasn’t enough, you also get the overworked, unconfident assistant, the painfully adorable kid, and the mother who doesn’t love her ambitious daughter enough.

It’s hardly a surprise when Ben charms the entire office, and, after some resistance, Jules. She starts to rely on him not only for professional help but also personal guidance, which is where the film gets a little interesting. Jules’ affable husband Matt (Anders Holm), who gave up his marketing career to be a stay-at-home dad, is revealed to be having an affair. Jules is aware of this, and knows she ought to confront Matt, but has been putting it off until she takes a decision on the new CEO she’s being pressured into hiring. Luckily, Super-Ben is at hand to dispense relationship advice, some of which she thankfully ignores.

Meyers is one of Hollywood’s most successful female writer-directors. The Intern, however, is hampered by its attempts to be hip, and has none of the knockabout charm of What Women Want. De Niro does only as much as he needs to (and sometimes less) in a film that genuflects to him. It’s a little unnerving to see this most spiky of actors allowing himself to be adorable, after decades of avoiding exactly this.

It’s left to Hathaway to rescue what she can. Her Jules is by turns brittle, warm, self-possessed, vulnerable and impulsive, and Hathaway conveys all this without making her performance seem like an acting class. Few actors today can cry like she does on screen; even fewer can transform material like this into something halfway resonant. Fifteen minutes in Les Misérables won her an Oscar, but this unheralded, largely unremarkable film shows what she’s capable of.

This review appeared in Mint.
Posted by a fan apart at 2:06 AM