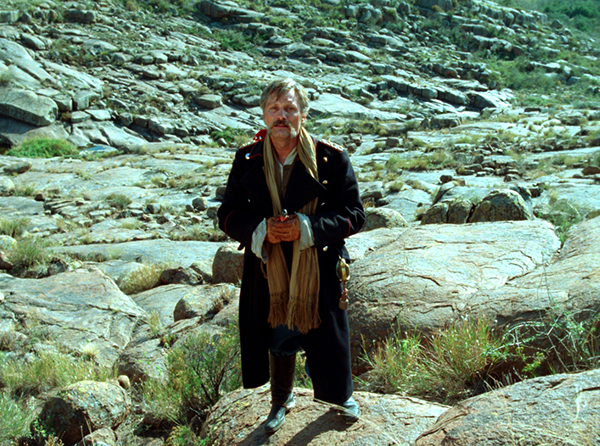 Lisandro Alonso’s film opens with a paragraph on the expeditions that had set out to find the mythical, elusive land called Jauja. “With time, the legend grew disproportionately,” it reads. “People were undoubtedly exaggerating, as they usually do.” The sly Borgesian kick of “as they usually do” is a hint that Jauja will shift its mental landscape to suit itself, and the viewer must either shift with it or abandon ship and find something a little more explicable.

In an unnamed rocky wasteland in Argentina in the 1880s, a Danish captain, Gunnar Dinesen (Viggo Mortensen), is travelling with his 15-year-old daughter Ingeborg (Viilbjørk Malling Agger). Their party includes a couple of soldiers, including a young man that Ingeborg is in love with. Where they’re going, we have no idea; it’s unclear if Gunnar himself does. The film seems poised to become ‘about something’ when Ingeborg runs off with the soldier and Gunnar sets off alone in search of her. But even with an actual quest at hand, there’s little direction to our knight’s travels. The rumoured presence in the parts of an ex-soldier who now wears women’s clothes and commands a small militia adds to the atmosphere of surreal unease.

All this would be difficult to watch if there wasn’t someone as intriguing as Mortensen at its centre. The actor grew up in Argentina, where he learnt to speak Spanish. He speaks both Danish and Spanish here, though he spends most of his time onscreen in silence. One of the infrequent but unparalleled joys of cinema is the chance to watch great actors just sit in one place and think. Alonso affords us every opportunity to do this, training a static camera on Mortensen for what seems like minutes at a time.

Alonso, an Argentine director and screenwriter, has said that Jauja is his variation on a Western. There are hints of the Western mythology here: the local tribes here are derisively clubbed as ‘Coconuts’, just as the Native Americans were all ‘Indians’; and Gunnar’s search for his daughter has obvious parallels with John Wayne’s mission in The Searchers. Other, less obvious movies seem to haunt Jauja as well, like L’Avventura, in which events set in motion by one woman’s disappearance lose their momentum and purpose, and Aguirre, the Wrath of God, another film about a father travelling with his daughter that examines the mania of white settlers in Latin America. There’s also a suggestion of the deadpan humour of Aki Kaurismäki, a connection made flesh by the presence of Timo Salminen, the Finnish director’s regular cinematographer, behind the camera.

Though the film seems to comment on its mythical quality through a remarkable visual device – the corners of the screen are curved, like a vintage photograph – this could just be another attempt to wrong-foot its audience, to suggest a legend where nothing but confusion exists. I wouldn’t want to spoil the film’s final stretch for you by discussing it in detail, so I’ll just say that it results in an already elusive film becoming even more elliptical and subtly transgressive. “I have a feeling this has happened before,” Ingeborg remarks at one point. It’s this feeling of inevitability, of people as characters in some cosmic play, which makes Jauja such a puzzle and such a delight.

This review appeared in Mint.
Posted by a fan apart at 1:43 AM