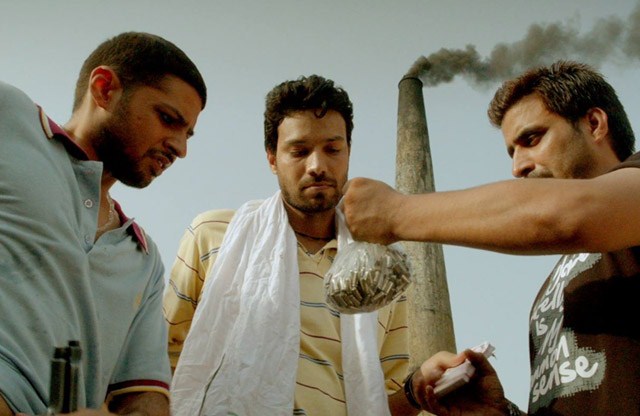 Recently, news emerged that Zeishan Quadri, who co-wrote and played that singular sociopath, Definite, in Anurag Kashyap’s Gangs Of Wasseypur, has been tapped to direct a sequel to the 2012 film. Meeruthiya Gangsters gives us an idea what that might look like. Quadri’s first outing as director is like a low-rent Wasseypur. The setting’s been changed from small-town Jharkhand to small-town Uttar Pradesh, but the blending of humour and violence and everyday life in north India is much the same. Other factors contribute to the Wasseypur hangover—the presence of Jaideep Ahlawat (he played Shahid Khan in Kashyap’s film), the sweeping camera movements, even the background music, which at times apes Sneha Khanwalkar’s score.

The film begins with a scene so transparently ambitious and completely wrong that it’s a wonder no one counselled the young director against it. The camera approaches the table at which the protagonists are sitting, and starts to whirl around it. This is a shot used fairly often by young film-makers, most of whom have learnt it from Quentin Tarantino movies. It’s a nice little trick if you can do it right, but Quadri misjudges the speed. It’s too fast, and instead of inducing the desired effect, all the movement does is call attention to itself. And it just doesn’t stop—we’re whirled around the table for what seems like 3 minutes.

Things calm down a little after that, and we are slowly able to tell one gangster from another. Quadri’s writing is still sharper than many of his Bollywood peers, and he gives Amit (Aakash Dahiya), Nikhil (Ahlawat), Sunny (Shadab Kamal), Sanjay Foreigner (Jatin Sarna), Gagan (Vansh Bhardwaj) and Rahul (Chandrachoor Rai) quirks, small identifying details, hints of personalities. We see the six of them go from minor extortion and strong-arming to robbery and kidnapping in Meerut and its surrounding areas. Yet, even as the ante is upped, the stakes remain low—there’s no urgency to the crimes, which are committed almost offhandedly. Nor is there much urgency on the part of police inspector R.K. Singh (Mukul Dev), the closest the film comes to giving our boys a serious rival.

There’s some fun to be had just watching the hoodlums sit around, cuss and talk about guns, their romantic entanglements or the relative merits of waving a shirt or underclothing as a white flag. The largely unknown cast is believably ornery, with funny turns from the drawling, long-haired Dev and the blond Sarna, and Ahlawat proving yet again that he has the charisma necessary for bigger, better roles. But the plot goes nowhere and the camera goes everywhere—there’s a tracking shot or an unusual angle in almost every scene, giving the impression that Quadri is straining for effect. There’s also little of the sociological and historical context that underpinned the equally violent and jocular Wasseypur. Still, there’s just enough here to suggest that Quadri has a future as a screenwriter. Direction, though, may require a little work.

This review appeared in Mint.
Posted by a fan apart at 12:19 AM