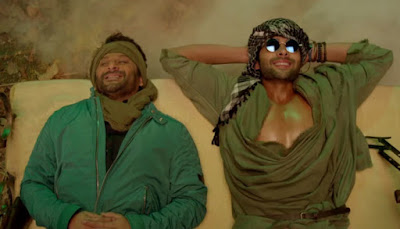 Arshad Warsi might be the hardest-working actor in Bollywood. Since Tere Mere Sapne in 1996, he’s averaged over two films a year. Most of what he is offered is in the vein of Circuit, his breakthrough role in the two Munna Bhai films: second lead, funny, street-smart. Whenever he has had something to work with—Waisa Bhi Hota Hai Part II, Kabul Express, Sehar, Ishqiya, Dedh Ishqiya—he’s been excellent. But even when the material’s been bad (which is most of the time), Warsi is rarely less than watchable.

Welcome 2 Karachi is just the sort of awful derivative comic slop Warsi’s had to wade through his entire career. He plays Shammi Thakur, a former naval officer who takes a yacht out to sea with his friend, Kedar Patel. Along comes a storm—or rather, along comes some of the shoddiest VFX I’ve seen in my life. The boat capsizes, and the two of them wash up on a beach. A bomb detonates near them—more embarrassing VFX. They wake up in a hospital and realize that they’re in Karachi. The rest of the film has them running from the ISI, the CIA, the Taliban and local hoods.

Welcome 2 Karachi was originally supposed to star Irrfan Khan along with Warsi, but he had to drop out. He was replaced by producer Vashu Bhagnani’s son. For those who haven’t seen his work, Jackky Bhagnani is the anti-Arshad Warsi. He’s only ever appeared in films produced by his father. Unlike Warsi, who can save a bad line like few others, he actually detracts from his surroundings, robbing scenes of energy and humour. Each time Warsi builds up a scene, he knocks it down with his whiny-ness and his put-on Gujarati accent. He’s like a less interesting Riteish Deshmukh.

Had Welcome 2 Karachi been shot in Pakistan, it might have retained some interest despite itself. I’m not sure whether this was ever the plan, but at any rate, the Pakistan of the film was recreated—unconvincingly, as it turns out—in parts of England and India (Tere Bin Laden, shot in Allahabad and Mumbai, gave us a far more convincing Karachi). Still, what use is production design if half your Pakistani TV reporters are speaking in Hindi? I could tell you more about the plot, the stretched-out gags, about American dancer and (somewhat) actor Lauren Gottlieb as the most improbable ISI agent ever, but what’s the point? All you really need to know is that this is the kind of film in which there’s a running joke about two characters named Ittefaq and Watthefaq.

Three years ago, director Ashish R. Mohan made the not-all-that-bad Khiladi 786, an Akshay Kumar action movie that was really more of a comedy. At the time, I was curious to see what he’d do with straight-out comic material. I know now. Bhagnani and he can go ahead and make “Welcome 3 Karachi”. But for God’s sake, leave Warsi out of it.

This review appeared in Mint.
Posted by a fan apart at 7:36 AM