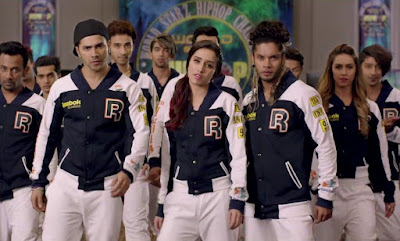 Anybody can dance. But not everyone can direct. Or, to be more specific, not everyone can direct an actual movie. It is possible to direct a series of music videos, glue them together with dead mothers and missing fathers, and call it a movie, as Remo D’Souza does with this loose sequel to his 2013 film ABCD: Any Body Can Dance. It’s the curse of the modern dance movie—the Step Up formula of stock characters and sweet moves. We may have entered that dark age when sensible storytelling and krumping can no longer exist in the same frame.

ABCD 2 is based on the real-life exploits of Mumbai’s Fictitious Dance Group, which became the first Indian troupe to qualify for the World Hip Hop Championship in Las Vegas. In the movie, the group, renamed Mumbai Stunners, is led by Suresh (Varun Dhawan), who is driven by the memory of his deceased mother (“She died with her ghungroos on,” someone reminds him—a line that, for better or worse, is the most memorable one in the film). With the help of ace choreographer Vishnu (Prabhudeva)—the central character in ABCD—he starts putting together a team to help them achieve their shared dream of competing in Vegas.

This is dance porn at its most basic: there are audition dances and rehearsal dances, qualification dances and competition dances. In between all this, some approximation of an underdog tale unfolds, but in a most distracted manner. Plot strands are planted and then forgotten: for example, we’re never sure if the Stunners’ disqualification from a local competition for stealing another group’s steps—something that happened to the Fictitious troupe as well—is an actual case of cheating or just bad luck. There’s virtually no effort made to come up with inventive story solutions: when around Rs.20 lakh are needed, someone just turns up with the money at the last moment; when the film is three-quarters through, its female lead, Shraddha Kapoor, who hasn’t had anything to do yet besides dancing, suddenly finds herself in love with Dhawan’s character.

When people aren’t in motion on screen, ABCD 2 is a snooze. Luckily, that’s only 20% of the time. D’Souza, who worked for years as one of Bollywood’s most successful choreographers, packs the screen with writhing, seizing, arching, flying bodies. It’s thrilling stuff, all those flashy moves, rendered even flashier in 3D by Vijay Arora’s roving camera, accompanied by Sachin-Jigar’s EDM-heavy score. It is also choreographed to a T, and after a while I found myself wishing for something more free-flowing, with less precision and more personality. “We dance to express, not to impress,” says Suresh at one point. Their act struck me as the exact opposite.

But what do I know? Anybody with two left feet can write a review.

This review appeared in Mint.
Posted by a fan apart at 2:46 AM