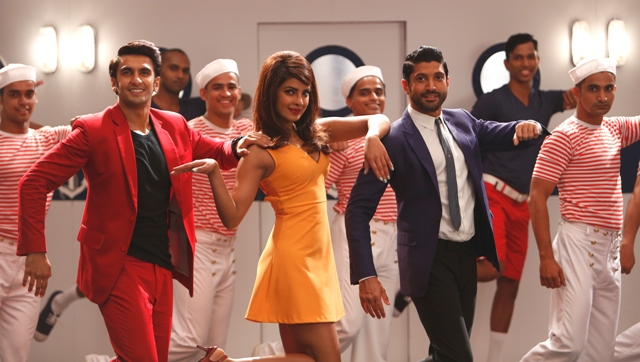 Four years ago, Zoya Akhtar’s Zindagi Na Milegi Dobara suggested that there was no deep-seated emotional problem that a good Eurotrip couldn’t solve. Apart from a deep sea diving episode that left Hrithik Roshan crying big, manly tears, that film mostly took place on land. Akhtar’s new film heads into deeper waters, but is just as shallow as its predecessor.

Dil Dhadakne Do concerns itself with the assorted issues of the Mehra clan, and expects us to be concerned as well. Patriarch Kamal (Anil Kapoor), a self-proclaimed ‘self-made man’, is trying to keep his business afloat. His marriage to Neelam (Shefali Shah) has come apart at the seams, though they can’t summon up the will to leave each other. Son Kabir (Ranveer Singh) is unhappy that his plane is being sold. Daughter Ayesha (Priyanka Chopra) is upset her parents didn’t put her name on an invitation card announcing a pleasure cruise to celebrate their 30th wedding anniversary (to be fair, she has larger emotional fish to fry). Will her resentment bubble up during the cruise, along with a dozen other grudges? Will everyone forget their troubles from time to time and dance? Will there be a voice-over supplied by an animal? You bet.

There’s a good bedroom farce buried somewhere here. Ayesha is married to Manav (Rahul Bose) but is carrying a torch for Sunny (Farhan Akhtar), her ex. Kabir is engaged to Nuri (Ridhima Sud) — his father basically pimps him out, since she’s the daughter of a potential investor — but he’s rapidly falling for Farah (Anushka Sharma), a dancer on the ship, while his betrothed only has eyes for another. But the film is only intermittently farcical; it keeps slipping either into melodrama, with characters threatening to slash their wrists and jump overboard, or into the corniest of romantic moods.

To see how safe and self-satisfied an exercise Dil Dhadakne Do is, one need only compare it to Tanu Weds Manu: Returns. On a technical level, Anand Rai’s film is no match for Akhtar’s: it has no visual aesthetic to speak of, and it’s unlikely that Rai will ever feel the need to do a musical number in one take, as Akhtar does here. Yet, Tanu Weds Manu: Returns takes genuine narrative risks, and while some of these hairpin turns make little sense, there’s a genuine look-Ma-no-hands feel to that film. Dil Dhadakne Do, on the other hand, does very little that’s unexpected or exciting in its 169 minutes, unless you count a Javed Akhtar-scripted voiceover by Pluto the mastiff.

The performances aren’t bad, but none of the actors — with the possible exception of Shefali Shah — seem to get under the skin of their characters. Kapoor, his Punjabi accent off and on like a faulty switch, hams his way extravagantly through the film, something his fans are unlikely to mind. Ranveer Singh gets the most out of the comic scenes; his reactions to his parents’ crazy suggestions are very well-judged. Chopra almost makes you feel for her character but is too mannered for it to really work. Farhan Akhtar is hardly here.

Dil Dhadakne Do may be superficial and emotionally unengaging, but so was Zindagi Na Milegi Dobara, and that was a huge hit. Zindagi had people leaping out of planes and running from bulls, which helped distract from the blandness of the drama. This time, apart from the one-take song, the screen refuses to come alive, no matter what Akhtar and cinematographer Carlos Catalan throw at it. (I’ve never seen so much slo-mo deployed to so little effect.) Still, I’m sure there will be plenty of viewers happy enough to see beautiful people visit beautiful places and engage with problems that they think are earth-shattering but are actually depressingly commonplace.

All this would seem to suggest that I loathed the film, which isn’t the case. I just didn’t care whether the Mehras sank, swam or floated through life, clutching at each other like bits of emotional flotsam. Pretty but never dazzling, busy but never riveting, glib but never wise, Dil Dhadakne Do never does find its sea legs.
Posted by a fan apart at 4:50 AM

Thank god, someone saw through the farce of ZNMD