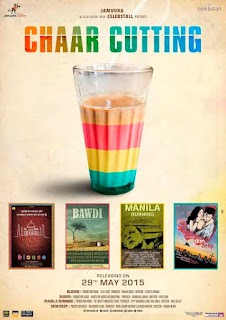 When the Ramones started out, they used to get asked why their songs were so short. They’re actually normal-length songs, the progenitors of punk said, we just play them fast. Those who think the same principle applies to short films—long films played fast—are mistaken. Short films have their own rules and rhythms and physics. Un Chien Andalou doesn’t need more than 16 minutes to decimate all that is holy, while the 32 minutes of Night And Fog contain an eternity of pain.

Happily, of the four shorts in Chaar Cutting, a portmanteau film assembled by Jamuura Talkies and featuring largely unknown directors, only one—Vivek Soni’s Rajasthan-set Bawdi—seems to be auditioning for a chance to be a longer film. Though it’s the best-looking of the four films by some distance, the emotions served up are overheated and unearned. Village boy Vishnu (Priyanshu Painyuli) loves Tulsi (Sonal Joshi), who’s about to be married off to another man; he’d ask for her hand but that would involve leaving his village and working for the soft drink company his aged father is protesting against. All this might have been worked out over the length of a feature—crammed into 20-odd minutes, it’s beautiful but unconvincing.

Anuj Gulati’s Manila Running has the outward appearance of a thriller, with a Frenchman running from machete-wielding, pistol-packing toughs in Manila. His reason for being there is the big comic reveal—which is funny enough, though the film really should have ended there. Equally strange but more involving is Skin Deep, written by Vikramaditya Motwane and directed by his assistant on Lootera, Hardik Mehta. It begins audaciously, with sounds of lovemaking interrupted by protestations—by a male voice—that it hurts too much. Later, the young man, who is planning to elope with the girl in a few days, decides to go in for a circumcision. Things go wrong, but Mehta defies expectations by not playing up the comic elements in his material. His melancholy approach is complemented by affecting performances by Naveen Kasturia and Aditi Vasudev, who played opposite each other in last year’s stoner indie Sulemani Keeda.

The final short, Vijayeta Kumar’s Blouse, has a sweetness which is at odds with its ribald premise. A wife asks her schoolteacher husband, who’s leaving home for a while, to bring her back a blouse as a present (the village he’s visiting has a famous tailor). He agrees, but forgets to carry a sample with him. The tailor, however, offers a solution: look around, find a woman who resembles your wife bust-wise, and leave the rest to me. The teacher reluctantly agrees and ends up picking a candidate who turns out to be the tailor’s wife. The two female characters are disappointing, but Sumeet Vyas is an appealingly abashed Masterji and Imran Rasheed is very funny as the tailor.

As portmanteau films go, Chaar Cutting isn’t bad. None of the four shorts is an outright dud, which is more than one can say for the high-profile Bombay Talkies experiment two years ago. Yet, I was left feeling slightly disappointed, not so much by the films but by the apparent lack of ambition. These are young film-makers at the start of their careers, unencumbered by expectations and industry pressures. Did none of them feel like experimenting a little, messing with the format? There’s very little of the excitement and risk that one associates with great short films. In its place is a less thrilling—but possibly more employable—quality: competence. None of these directors let themselves down, but it would have been nice if they’d aimed higher.

This review appeared in Mint.
Posted by a fan apart at 7:31 AM