Surveyor and surveyed in Portrait of a Lady on Fire 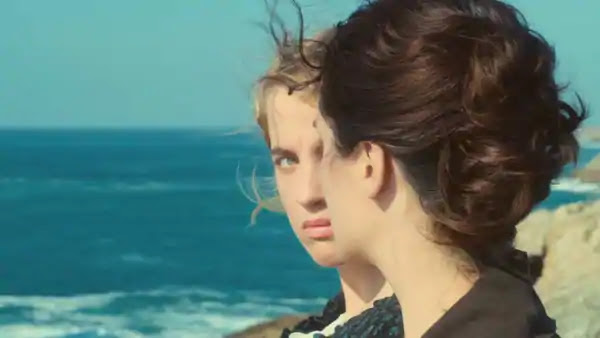 Marianne (Noémie Merlant) stands on a rocky flat overlooking the ocean. Beside her is Héloïse (Adèle Haenel), whom she’s just met, and has been hired to paint in secret by her mother (she refused to sit for a previous, male painter). We observe Marianne in side profile. She’s blocking Héloïse, but when she turns her head to steal a look, her subject comes into view. When she turns a second time, Héloïse is staring back at her, Haenel’s glare piercing like she already knows the truth. It’s a sign that everything in Portrait of a Lady on Fire, which unfolds on a desolate island in late-18th century Brittany, will emerge from a complex web of looking – between painter and subject, patron and artist, and, eventually, two thinkers and lovers.

Later, after Marianne reveals the subterfuge, Héloïse takes a look at the painting. Her first question is: “Is that me?" In his 1972 mini-series, Ways of Seeing, John Berger observed: “A woman must continually watch herself. She is almost continually accompanied by her own image of herself… And so she comes to consider the surveyor and the surveyed within her as the two constituent yet always distinct elements of her identity as a woman."

Héloïse's immediate response suggests she can’t stop surveying herself even as Marianne surveys her. Céline Sciamma’s film also understands that the male gaze need not always be wielded by men. Héloïse sees the portrait – in which she’s apple-cheeked and placidly happy – and asks Marianne if this is how she pictures her. Marianne stammers something about conventions and rules. She’s painted her subject the way she's been taught, the way it would be accepted by her male-dominated profession.

Another wrinkle is added if you consider Haenel and Sciamma were in a relationship for many years, though they weren’t together by the time work started on the film. This knowledge turns the scene where Marianne tells Héloïse that she knows she’s embarrassed when she bites her lip or agitated when she places her hands a certain way, and Haenel’s character responds in kind, beautifully resonant – for these are things one usually notices in a companion over time, not in the space of a few days.

There is symbolic weight to the story, right from the names of the characters. Héloïse was a 12th century scholar and nun, whose letters to her lover Abelard are considered an early example of proto-feminist writing (the Héloïse of the film also lived with nuns). And Marianne is, of course, the name associated with light and liberty in France – not to mention a reversal of Jacques Rivette’s 1991 film, La Belle Noiseuse, where the painter’s model is named Marianne. In at least one case, the scene makes more sense if you know the reference. Marianne sketching a mock-abortion struck me as casually cruel to the maid who’s posing, and who’s undergone the real thing earlier in the day. I later read that this was a nod to French author Annie Ernaux, who wrote about her own abortion and argued that no museum would ever hang a painting of one.

Sciamma has made three films before this – Water Lilies (2007), Tomboy (2011), Girlhood (2014) – each focused on female characters. In Portrait, men are almost entirely absent from the film. When we see a man sitting at the table late in the film, after having spent most of it in the company of women, it’s somewhat of a shock. Sciamma intended it that way, calling it a “jump scare" in an interview and adding, “The jump scare is patriarchy."

As befits a film about art, you could pause the film at several points and find yourself in an 18th century painting. Claire Mathon’s photography recalls Barry Lyndon (1975) and El Sur (1983), films shot exclusively with natural light and with candles in interior scenes. But there’s little arthouse fussiness here, Sciamma’s minimalist staging keeping the focus on the characters, their surroundings and their ideas. Unlike the languorous summer of Call Me By Your Name (2017), there’s an urgency to this story: Marianne’s time on the island is limited, and Héloïse will soon be wed to an Italian nobleman. The painting will go to his house, will be his property. This leads to a fight, Marianne saying she resents her work because “through it, I give you to another". Héloïse replies, “Now that you possess me a little, you bear me a grudge."

A little later, after Marianne sketches her for herself, Héloïse teases her lover that she’ll be able to “reproduce that image to infinity". “After a while, you’ll see her when you think of me," she says, showing that she, too, can be jealous of a drawing. There’s so many ideas to unpack per scene, and so much pleasure to be derived, that the two-hour runtime seems – like the brief island idyll for the characters – all too brief.

This piece appeared in Mint.
Posted by a fan apart at 4:27 AM