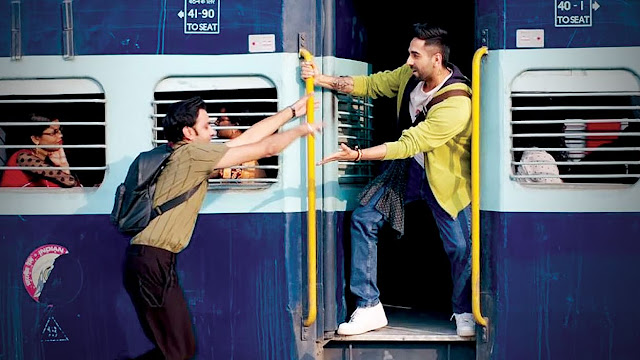 Dilwale Dulhania Le Jayenge turns 25 in October. If the ability to turn up in other films is any measure, then it is, by some distance, the most influential Hindi film of the last quarter-century. The heroine’s stern father not agreeing to her union, the hero turning up unannounced at her home and winning over her family—all this has been assimilated into the grammar of Hindi cinema. And the climatic train scene has been redone so many times that it’s passed into parody.

Before Shubh Mangal, the only mainstream Hindi film with a homosexual pairing at its centre was Shelly Chopra Dhar’s Ek Ladki Ko Dekha Toh Aisa Laga (2019). That film too used the broad beats of Dilwale. Sahil (Rajkummar Rao) initially falls in love with Sweety (Sonam Kapoor). When she reveals, however, that she’s in love with a girl but her family won’t approve, he turns up announced at her Punjab home to win over her family—just like Raj in the original, except Sahil is there as a friend. Anil Kapoor plays a milder version of Puri’s stern dad. There’s a train in the last scene. And there are mustard fields: the defining visual reference of Aditya Chopra’s film.

Dilwale’s ubiquity makes it a great reference point for Dhar and her co-writer, Gazal Dhaliwal, and Kewalya to hang their queer narratives on. Additionally, there just isn’t a tradition of gay or lesbian film that they could reference if they wanted to. Shubh Mangal alludes to this by having its leads sing "Yeh Dosti" from Sholay, a film with a friendship so deep that it could be mistaken for love. For years, gay viewers have located signs of pyaar within declarations of dosti in Hindi films. Kewalya turns this on its head: They are singing dosti but they mean pyaar.

In front of the demurely progressive Ek Ladki, Shubh Mangal seems especially bold. Perhaps this is the confidence lent by some distance from September 2018—Ek Ladki, which released five months after the Supreme Court’s reading down of Section 377, only brings out Sweety’s partner 85 minutes into the film. In contrast, Khurrana and Jitendra Kumar share a passionate kiss 20 minutes into Kewalya’s film. There’s another, more public kiss later at a wedding. Both films speak to the close-minded, homophobic viewer, but only one is interested in making that viewer comfortable.

There’s a small wrinkle in Shubh Mangal’s Dilwale referencing that’s particularly heartening. When Kartik comes to win his love back, he does so not as Raj (and Sahil) did, under false pretences, but as himself. Raj, though straight, had to hide his identity. Kartik is out, and proud.

This piece appeared in Mint Lounge.
Posted by a fan apart at 1:35 AM