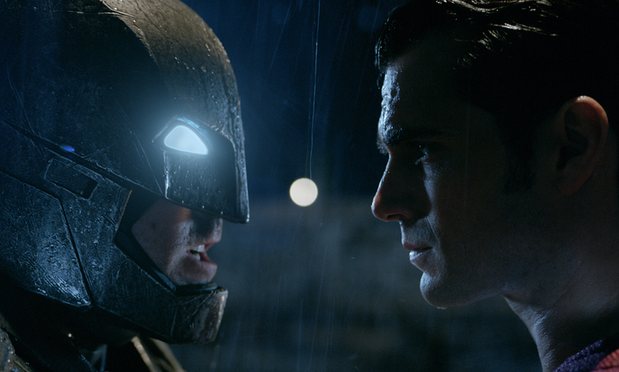 Even before you’ve watched a frame of Batman v Superman: Dawn of Justice, the bad decisions have begun. Who at DC or Warner Bros thought it would be a good idea to attach The Lego Batman Movie trailer to this? It’s strangely self-sabotaging, playing a parody of the same thing you’re asking audiences to take seriously for the next 2 hours. With the memory of Will Arnett’s gravel-voiced Lego Batman beatboxing to avoid talking about his feelings still fresh in my mind, Ben Affleck’s series of scowls and growls seemed especially silly.

With his sober-sided Batman trilogy, Christopher Nolan gave DC movies a visual and tonal template that was very different from the increasingly irreverent Marvel output. This straight-faced approach was fine as long as Nolan—who structured his films so tightly that the audience had little room to maintain any ironic distance—was in charge. But then came Zack Snyder with the 2013 Superman reboot, Man of Steel, which had all the angst of the Nolan DC films but none of their narrative drive or genre innovations. DC responded by giving him an even bigger project to helm—Dawn of Justice: 150 minutes of Superheroes Who Need Shrinks.

After an opening voice-over that’s a near-parody of the hardboiled tone Nolan adopted (I recall the nonsense phrase 'diamond absolutes'), and the obligatory scenes with young Bruce Wayne seeing his parents killed and falling into a cave full of bats, we get down to the main business of the film: setting the two superheroes on a collision course. First, we see how much damage to property—and, one assumes, life—was caused by the climactic battle between Superman (Henry Cavill) and General Zod in Man of Steel. As the city crumbles around him, Bruce Wayne (a greying Affleck) drives around frantically, saving a little girl and a trapped employee and glaring at the skies. It’s hardly a surprise when he tells Alfred (Jeremy Irons, taking over from Michael Caine) later in the film: “He has the power to wipe out the entire human race.... If there’s even a 1% chance he’s our enemy, we have to take it as an absolute certainty.”

Even as Batman’s distaste for what he sees as Superman’s unchecked power grows, Superman starts wondering whether Gotham’s Dark Knight is getting out of hand, what with his new penchant for branding criminals. A director with a little humour in him might have also hinted at pettier reasons for their animosity, like Batman being unhappy about Superman’s constant good press. No such luck. For Snyder and DC, comics are serious business.

As one might expect, the fight between the defenders of Gotham and Metropolis is a long, long time coming. Before that, we are taken through a largely pointless subplot about US military weapons supplied to African militia—which seems to exist only to provide Lois Lane (Amy Adams) something to do—and an unapologetically fan-serving one regarding the formation of the Justice League. We are also introduced to the latest incarnation of Lex Luthor, eccentric billionaire and Superman’s most memorable adversary. He is played here by Jesse Eisenberg, who obviously felt the need to balance out Affleck’s dourness and Cavill’s spot-on impression of a grumpy wax figure. In doing so, he creates a whole new problem for the film: His facial and verbal tics are so outrageous, they just emphasize how safe and boring everything else is.

Snyder has always made dark, grimy-looking films, and his R-rated ventures (300; Watchmen) had a certain gory flair to them. However, Man of Steel and this film indicate that he doesn’t quite know how to enliven a mainstream PG-13 movie. Nolan’s visuals were equally dark, but they had a noir slickness to them. Here, the darkness is unattractive and fairly depressing.

It isn’t just the visual palette, the tight-jawed performances or the largely dull writing (screenplay by The Dark Knight’s David S. Goyer and Argo’s Chris Terrio). Dawn of Justice is downright incoherent at times. One ambitious dream sequence had the theatre audience looking at each other in confusion, and the action scenes were a mess of sudden cuts and explosions. All the talk about unchecked power and acting unilaterally must have some political undertones, but I’ve no idea whether the film considers Superman a symbol of unchecked US aggression or a patriot slowed down by bureaucracy or something else altogether. The film’s conception of Batman as a jaded crime fighter, made cynical by 20 years on the job, is more intriguing, but we aren’t given enough time with him to understand how he got this way.

In the end, two massive egos in capes and suits, both sons of murdered parents, face off. Maybe comic book fans will be thrilled by the sight of Batman returning Superman’s punches. Perhaps they won’t find the Wayne-Wonder Woman (Gal Gadot) dynamic identical to the Wayne-Selina Kyle one from The Dark Knight Rises. The audience I saw it with seemed desperate to find reasons to cheer and whoop—a sad commentary on the balance of power in movie making and watching today. Personally, I find it more than a little depressing that films like these—bloated, inept, making heavy weather out of pieces of pulp entertainment tossed out for children decades ago—have become such an inescapable part of our lives.

This review appeared in Mint.
Posted by a fan apart at 3:35 AM