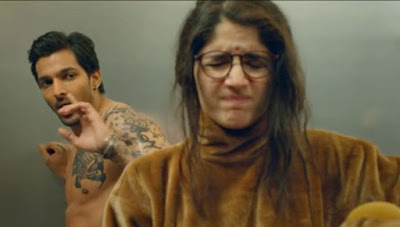 I’ve never seen anyone cry as much in a single film as Mawra Hocane does in Sanam Teri Kasam. Not that her character, Saraswati, doesn’t have reason enough to shed tears—the film is essentially built around her being picked on, berated, slapped, made over, toyed with and sacrificed. It would also be churlish not to admit that Hocane has a certain flair for onscreen crying. As Saraswati’s love, Inder (Telugu actor Harshvardhan Rane), bluntly puts it: “When I see crying girls, I run away. But when you cry, I want to kiss you.”

At certain points in Sanam Teri Kasam, I felt like shedding tears myself. After being discovered in Inder’s flat, treating his wounds, Saraswati—who can’t get a man to agree to marry her and is a terrible disappointment to her family because of this—is thrown out by her caricature of a Tamil dad. Inder, who’s so bad-ass he rarely wears a shirt and drinks milk straight from the Tetra Pak, feels responsible; he finds her a flat, then sets about finding her a husband. I felt the sniffles coming on when Saraswati, post-makeover, tells him: “This pretty face you’ve given me, I won’t waste it.” Of course, no one bothers to tell Saraswati that the pretty face is hers, and that Inder has just found her a good barber. And a sob might have escaped me when Inder looks at Saraswati and says, by way of warning her not to fall for him: “I’m a beast.”

Eventually, the beast and the librarian (with a name like Saraswati, what do you expect?) fall in love, but there’s more bad luck in store for the two, because this is “a love story sealed with a curse”. If you’re the viewer, this curse lifts after 154 minutes, by which time we’ve been introduced to Mumbai’s most forgiving cop, the worst fiancée in the world and the most literal interpretation of the phrase “You’re dead to me”. The directors, Radhika Rao and Vinay Sapru, obviously believe in their film; little details from early on pop up in later scenes, and the last 20 minutes are dragged out like they’re Sundance material. But it’s very difficult to take the film as seriously as they do—especially after it becomes clear that they’re unwilling to grant their female lead the slightest bit of agency. But Hocane, a Pakistani VJ-turned-actor, does just enough to suggest that she’d be effective in more capable hands.

This review appeared in Mint.
Posted by a fan apart at 4:09 AM