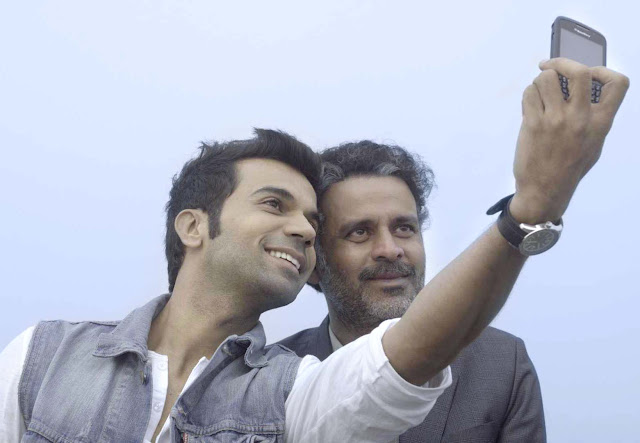 It’s night in Aligarh’s Medical Colony. The streets are empty, the only sound that of a train rattling by. We’re gazing up at the window of a nondescript first floor flat. A light comes on, and we see two figures inside, presumably the greying man and the rickshaw-puller who went up the staircase moments ago. We hear the sound of a light switch; on-off, on-off. Our attention is then diverted towards two men coming down the road. One of them is holding a camera. We watch as they ascend the stairs, disappear from view. Seconds later, muffled shouts are heard. The next thing we know, we’re inside the flat, watching the old man sitting naked on the floor, hugging his knees and crying.

In and of itself, this opening sequence of Aligarh is riveting—a lesson in concealment, from a film that’s been urging audiences to #ComeOut. What makes it poignant, though, is the way the film keeps returning to it, embellishing it. We see it through the eyes of the man left weeping on the floor: SR Siras, a 64-year-old professor of Marathi at Aligarh University. We also see it from the point of view of the intruders, affiliated with a local TV station, there to shoot a video of Siras in bed with his lover. We see it as a love scene, a crime scene, an ambush, as spectacle. It’s as if the film is showing us the many lenses Indian society uses to view homosexuality.

Shrinivas Ramchandra Siras was a real-life professor at Aligarh Muslim University. As in the film, his flat was broken into, and his private moments captured on film and leaked online. The next day, the university announced his suspension and gave him seven days to vacate his house. He challenged this verdict in the Allahabad High Court and won the case. Less than a week after the verdict, he was found dead in his flat, under “mysterious circumstances”. Traces of poison were discovered in his blood, but murder charges weren’t brought against anyone.

Aligarh, directed by Hansal Mehta and written by Apurva Asrani, tells this story through the bond that develops between Siras (Manoj Bajpayee) and a young journalist from Delhi, Deepu Sebastian (Rajkummar Rao), who’s interested in his case. The first time they meet, Siras’ blood pressure problems cause him to lose his balance, and Sebastian has to keep him from falling. The implication is clear: this shy, retiring old man could use a little support. The scenes with the two of them are beautifully written and played, with Siras gently deflecting Sebastian’s polite but blunt queries about his homosexuality. At one point, he objects to Sebastian asking if the man in his bed was his lover. “You’re making it sound like a dirty word,” he says, his voice genuinely pained. “I have a problem with that.”

Those who’ve followed Bajpayee’s career for a while will know that this isn’t the first time he’s played a mild-mannered outsider in a Hansal Mehta film. His Ram Saran Pandey in Dil Pe Mat Le Yaar!! (2000) is in many ways a rough sketch for Professor Siras: they’re both romantics, soft-spoken, looking for acceptance, fond of their drink. Mehta builds his film around Bajpayee’s performance, allowing him long, uninterrupted scenes in which he can seemingly do nothing but enjoy a glass of whiskey and sing along to Lata Mangeshkar in the dark. “Aap ki nazro ne samjha, pyaar ke kaabil mujhe,” he murmurs along with the song from Anpadh—“In your eyes, I have been found capable of love”; a heart-breaking sentiment considering his situation.

After the intimacy of scenes like this, the more prosaic moments involving public support for Siras and his case were, for me, less absorbing. There’s a nod to the time he appeared on NDTV little over a month before his death, but the babble of insensitive studio voices sounds a bit too programmed. Even the scenes in court lack the bite of Mehta’s earlier film Shahid, perhaps because Siras’ lawyer (played by Ashish Vidyarthi) is articulate and sympathetic, while the prosecutor is presented as vaguely buffoonish. (It’s more rewarding to concentrate on the small, actorly things Bajpayee is doing on the edges of these scenes.) Satya Rai Nagpaul’s camera moves as incisively as it did in Anhey Ghorey Da Daan and Chauthi Koot, but the film’s aesthetic is, for the most part, anti-beauty. Which just throws into sharper relief the beauty of Bajpayee’s performance, and Rao’s self-effacing charm.

It’s inevitable that any cinematic rendering of gay lives in India will be seen and promoted as an “issue film”. This has certainly been the case with Aligarh, and I hope it sparks conversations about Section 377 in TV studios and living rooms. Yet, an even bigger victory might lie in getting vaguely homophobic audience members—who, let's face it, will probably outnumber the pro-gay viewers of this film—to empathize with Siras, to understand his distaste for easy labels, to admit that even they sit in the dark with a drink and listen to old Hindi film songs.

This review appeared in Mint.
Posted by a fan apart at 1:00 AM