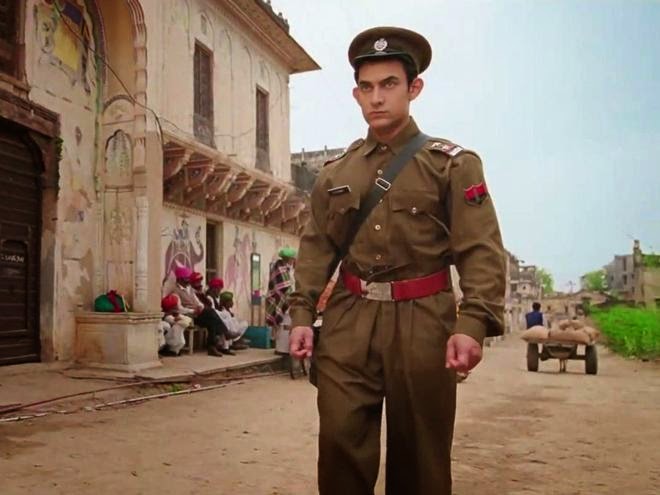 The general perception of Aamir Khan is of someone who orchestrates his public image to ensure that, in the words of Thom Yorke, there are no alarms and no surprises. Yet it’s also true that the actor has, over the years, publicly voiced his opinion on complicated, at times unpopular, issues. In 2006, he earned the ire of the Bharatiya Janata Party (BJP) by calling for the rehabilitation of those displaced by the construction of the Narmada Dam. ‘Satyamev Jayate’, the TV show he hosts and produces, has never been entirely free of controversy, though it might have done more to spark discussions on taboo issues than just about anything else in recent Indian pop culture. Just last month, he ignited a minor storm by expressing his personal distaste for the AIB roast. (He landed on the right side on public opinion—or at least liberal Twitterati opinion—when he expressed sympathy for NH10’s censorship woes). We met Khan—a wildly successful star who’s also been involved in projects as seemingly unsaleable as Raakh (1989), 1947 Earth (1998), Taare Zameen Par (2007) and Peepli Live (2010)—ahead of his birthday on 14 March. Edited excerpts from the interview:

You’re turning 50 this week. A lot of people who’ve grown up watching you are about to feel the passage of time.
Yeah, it’s around the corner. I feel the same, actually. I don’t really think of myself as 50. I’m not thinking of this as an age to stop and think about things.

It’s also been 42 years since you first entered the industry…
Well, technically speaking, yes, because I did my first film (Yaadon Ki Baaraat) when I was eight. But I don’t really count that. I count from Qayamat Se Qayamat Tak, which was 1988, so that’s 27 years. Though if you count my years as an assistant, it would be 30 years.

Do you think you entered the film industry at an exciting time? Or would you have preferred another era?
The only time I can say that would have been a very exciting one to be in the film industry was the 1950s. You had very talented minds working—great poets, filmmakers, actors, musicians. I think the creative talent at that time was of a very high calibre. But I’m happy with the time I came in. For me, as an audience, the late 1970s to late 1980s was the worst period. So me coming in at that time—not only me, but lot of other young people who felt that the last 10 years had not been very good, who were not excited about the work that was happening—we actually had to swim against the tide.

Was there that sense of wanting to work in a new way, trying to break the formula?
Oh yes. Because I knew that my sensibility was very different from what was happening around me. The kind of work I wanted to do, the kind that excited me, was not being done. Even the manner in which people were working was very different from the way I wanted to work. So it’s been a constant journey for me, swimming against the tide. Now the tide seems to be turning a bit...

Why do you say that?
Well, I think more and more films are being made which are of my sensibility. There are younger minds, a lot of young talent, which is coming up with stuff that’s challenging, unusual, different. I think audiences are changing as well. Earlier, what was considered mainstream was a very narrow path. Almost anything can be mainstream now. There are no rules anymore.

Was there any particular point at which your career dramatically changed course?
I think for me the defining moment was somewhere in 1989. My first film (Qayamat Se Qayamat Tak) released in April 1988. I took on some eight or nine films in the next six months. Within a year of my first film releasing and becoming a big success, I was perhaps the unhappiest person around. I used to go home and weep because I couldn’t deal with what was happening around me. And when I was going through that miserable time of doing work I was unhappy with, I swore to myself that I was not going to do another film unless I was totally happy with it. So I stopped signing films.

My films began releasing and they were bombing. I remember thinking, this is the end of my career. I was being called a one-film wonder, and rightly so. At that time, I got a phone call from Mahesh Bhatt who, at the time, was at the peak of his professional life. That call was like a drowning man being offered a life jacket. I went to meet him and he narrated the story. I didn’t like it. I asked him if I could think about it overnight. I desperately needed to sign that film, but for that I would have had to compromise with my heart. That was a difficult night for me. The next day, I met him and said, ‘I can’t do the film. I know I’m just a young kid who doesn’t know as much about film-making as you do, but I didn’t like the script.’ He was very sweet about it. What I’m trying to say is, if I’d compromised that day, I think I would have compromised all through my career.

Did that script get made into a film?
I don’t think so. I remember Mumtaz was supposed to be in it. But what I did do with Bhatt saab one year later was Dil Hai Ke Manta Nahin (1991). It kind of transpired after that initial conversation. He asked me what I wanted to do. I said there’s a story that I really liked—an American film called Roman Holiday (1953). He said there was an earlier film called It Happened One Night (1934), which is often considered to have inspired Roman Holiday, and why don’t I read the script? I did, and liked it.

How did you get involved with Dangal?
Nitesh (Tiwari; director of 2011’s Chillar Party and 2014’s Bhoothnath Returns) came to me and narrated the script. He met me before the release of Dhoom 3 (2013). I just loved the script, but I initially thought I’d do it later because my character was a little older, the father of two grown daughters. So I thought maybe I’d do this film five years from now. But I liked the script so much that I thought, what the hell, I’ll do it now.

I read that you’d be playing ages 19 through 55.
Nineteen is just a small flashback to when my character used to be a wrestler. The three ages I do play are late 20s, then 40s and then 50s. It’s the first time I’m playing a character in his 40s; the oldest I’ve played before that is in Dhobi Ghat, which is late 30s. But the age of a character per se is irrelevant. When a character excites me, it’s up to me to try and become that age. I did 3 Idiots despite the fact that the character was 18; in fact, that was the only reason I wouldn’t have wanted to do it, because it’s an absurd thing to try and play an 18-year-old.

You recently said in a press conference that you favoured a ratings system over film censorship. Do you think such a system might actually come about in the near future?
I think it should be possible. From the little knowledge that I have, there has been a process towards a ratings system in the ministry (of information and broadcasting) for the last few years. Strictly speaking, the censor board is not supposed to censor films, only certify them. The members actually cannot tell you what to remove, they can only rate it as an adult film.

And yet, scenes are removed. NH10 is reportedly being released with nine cuts, even though it was given an ‘A’ certificate.
I can’t comment on that. But the rating system right now is unclear. I have to see a film for myself before I can take my child for it. It’s helpful if you have ages like 12 and above, 18 and above. I would really like to see us moving towards that. I remember, a few years back, I had attended a meeting, which the I&B ministry had arranged for the CBFC (Central Board of Film Certification) staff and some film people. At the time, we’d discussed the ratings system, so I’m pretty sure it’s gone ahead.

Do you see any similarities between the protests against the AIB roast and the ones targeting PK?
Actually, I was not in India when the protests happened for the AIB thing, so I won’t comment on that. Regarding PK, we’ve been through a process, there’s a government body which has given our film the certificate to release. Thereafter, if anyone has a problem, they’re free to; in a democracy, you can look at a film and say, hey, this shouldn’t have been shown to me, or the general public, or should have been banned. You can go to court, write to the ministry. But physically force it to stop is not fair and that was what happened with PK.

You released the trailer of Shonali Bose’s Margarita with a Straw. Are you or Kiran planning to be involved with the film in some way?
Not officially. I think the team that’s made the film has done a wonderful job and the producers have been really supportive. Kiran and I happened to see the film and we just loved it. So I’m supporting the film very strongly; it’s a small film and I want to make sure that as many people as possible have the pleasure of seeing it. It’s one of the finest films to come out of India in recent times.

This interview appeared in Mint.
Posted by a fan apart at 1:49 AM