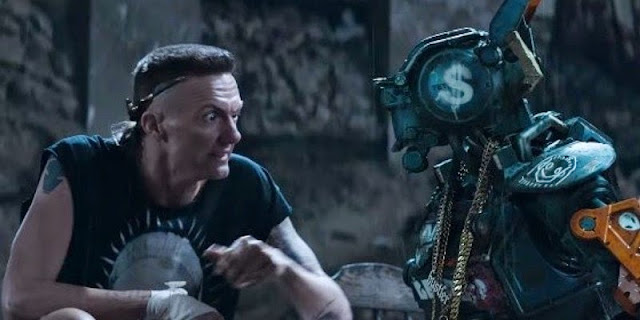 Neill Blomkamp’s Chappie is one of those frustrating films that leave you confused and jangled, aware that what you’ve witnessed something, but unsure of what that something is. The film shifts between broad comedy and sci-fi, coming-of-age drama and social commentary—not always gracefully, but with a real sense of purpose. Though it appears on the surface to be a mishmash of RoboCop (1987) and A.I. Artificial Intelligence (2001), Blomkamp manages to create something that’s one with his film-making style: dark, gritty sci-fi satire, preoccupied with issues of class and race.

Like Blomkamp’s breakthrough feature District 9 (2009), Chappie is set in a South Africa that’s both dystopian and much like the present day. It begins with reports of the world’s first robot police force being deployed in crime-ridden Johannesburg. Produced by a company called Tetravaal (a reference to a 2004 short film by Blomkamp called Tetra Vaal), these lithe, lethal machines are a huge success. Their creator Deon (Dev Patel), though, is working on something even more ambitious. He’s very close to building the world’s first fully conscious robot—a machine that thinks for itself and has opinions.

When Deon’s boss (Sigourney Weaver) shoots down his idea, he honours crazy inventor movie tradition by going ahead and doing what he planned anyway. But just as he’s leaving with the metal carcass of a police robot damaged on duty, he’s kidnapped by a trio of street criminals. The gang, headed by Ninja (played by South African rapper Ninja in a terrific, eye-popping performance), know who he is—they want him to program a robot to fight for them. Reluctantly, Deon installs his AI software in the robot, which comes to “life” much as a child would: as a blank slate. At this point, the film switches from a RoboCop-like satire to a very curious exploration of nature versus nurture, as Chappie—the name Ninja’s wife, Yolandi, gives the machine—tries to make sense of the competing world views of Deon and Ninja.

While it may not have the visual brilliance of last year’s Snowpiercer, Chappie does resemble Bong Joon-ho’s film in the outlandishness of its metaphors and its utter conviction in them. Ultimately, Blomkamp seems to suggest that AI might not be more dangerous than an unstable man with an itchy trigger finger (embodied here by Hugh Jackman’s Vincent). Tonally, Chappie is all over the place: Deon’s in a sci-fi film, Vincent’s testosterone levels suggest a summer blockbuster, while Ninja, Yolandi and Chappie could be out of a gang warfare punk flick like The Warriors (1979) or Jubilee (1978). But the film is also unsettling and darkly funny at times, with a gratifying amount of B-movie cheesiness undercutting its social criticism.

This review appeared in Mint.
Posted by a fan apart at 12:53 AM