Why Craig Ferguson will be missed I remember the exact moment I became a Craig Ferguson nut. It was an episode from February 2007, in which the host of the Late Late Show said at the top of his monologue: "I'm going to do something a little bit different tonight." In the language of late night, this sort of statement is often just a set-up for a joke, and when Craig mentions Britney Spears — who'd recently been in the news for shaving her head — you can hear the audience titter in anticipation. What follows is extraordinary. Craig proceeds to recount, over the course of nine minutes, his own protracted troubles with alcohol. The best line is when he's explaining how he came close to committing suicide, but was saved when someone offered him a glass of sherry. "One thing led to another, and I forgot to kill myself that day," he says ruefully.

Before this episode, I knew Craig as the creepy English boss from The Drew Carey Show and from his stand-up. He must have seemed an unlikely choice for an American late night show host when he started in 2005 — a Scotsman with a pronounced accent, and very far from a household name. And some of those early shows (which can be seen on YouTube) do look stiff and rehearsed, with Craig seemingly trying to fit some popular idea of what a talk show host should be like. I suspect that something clicked inside him in 2008, when he started to tear up, in full view of the camera, the question cards that his staff would leave for him. This freedom to go off-script loosened him up, and he began to introduce a series of outlandish tropes — offering his guests the choice between a big cash prize and an awkward pause — many of which would become part of the show's DNA.

The Late Late Show, which airs at 11.35 p.m. and 12.35 a.m. on the two American coasts, is the hip, broke younger brother of the shows in earlier time slots, the ones with Leno, Letterman, Conan. This has its obvious drawbacks — there's no announcer, no band, less money for fancy gags, and a lower profile of guests. Craig's masterstroke lay in calling attention to these limitations and turning them into a series of good-hearted jabs. Once, when scheduled guest Sean William Scott got stuck in traffic, he interviewed the coordinator in charge of that segment. There's little that's gone wrong on the show that Craig hasn't called attention to — a leak in the roof, non-functioning lights. Many of the barbs are aimed at the long-suffering producer, Michael Naidus, whose beatific resignation just makes Craig's fake indignation funnier.

In 2010, after five years without a sidekick that CBS couldn't afford, Craig introduced Geoff Peterson, a "gay robot skeleton". Geoff (voiced by Josh Robert Thompson) bantered with Craig like Andy Richter with Conan or Paul Shaffer with Letterman, but more importantly, he gave Craig a chance to poke fun at one of the most sacred of late night gimmicks — that of the straight man. That he began to be treated, over time, as a regular sidekick, was an intriguing commentary on talk show formulae and the audience's need for familiar tropes. (The layers of meta-narrative increased when Larry King voiced Geoff in one episode and told Craig, "You didn't want a robot who thinks, you didn't want someone who creates of his own mind...")

The best episodes were the ones where things seemed to spin rapidly out of control. Few TV hosts laugh as much as Ferguson does onscreen, or with such abandon. Anything can trigger off these episodes — a particularly dirty wisecrack by Geoff, or a bad piece of writing by his own staff (Johnny Carson would also riff on jokes that flopped, but his would invariably be a reaction to the audience reacting). And when Craig really starts to laugh, he can't stop. In one episode, Geoff reveals that he has homes in New Orleans, Edinburgh and New Hampshire, and invites Craig to come over and "throw beads". It's hardly a joke at all, but something about a blue-eyed robot saying all this tickles Craig. Soon, he's doubled over, clutching his face and thumping the desk.

The high point of absurdist comedy on the show is almost certainly the Icarus episode. It all began when Josh, who was indulging in a spot of self-promotion, was tweeted at with the words, "Careful, Icarus". Craig and Geoff spend the entire show riffing on Icarus (who flew too close to the sun), his father Daedalus and a hapless audience member who happened to have a chin beard ("I love that upside-down head look"). Off-kilter material like this, which suits Craig so well, would likely have defeated most other late night hosts. Letterman would have given a dry chuckle and returned to his regular monologue. Leno would probably have made fun of the sender for referencing Greek legends and trying to be superior. Fallon, Kimmel, Myers — they'd just reject it out of hand.

Perhaps because Craig is such a high-energy host, the episodes in which he dials it down are especially memorable. His 2009 interview of the Archbishop Desmond Tutu won him a Peabody and, by his own admission, "freed him up" as a host. There were long, moving epitaphs for his father and his mother. And there was the "no audience" episode in which he and Stephen Fry sat in an empty studio and talked about Fry's bipolar disorder and the history of late night. To steal a phrase Kenneth Tynan used in his terrific 1978 New Yorker profile of Johnny Carson, this was Craig doing the "salto mortale" — acrobat-speak for a somersault performed on a tightrope.

Craig, like all his contemporaries, regards Carson as something of a god. In a way, his own career has been built on huffing and puffing at the house that Johnny built. Yet, his deconstruction of the genre is never without affection; unlike Jack Paar, he tempers his edginess with self-deprecation. It would be nice to say that his daring and boundless invention was appreciated, that it changed late night TV in some visible way, but the sad truth is that the scene is still hide-bound and formulaic; the domain of middle-aged white men, as Ferguson often reminded his audience. If a Scotsman with a talking robot and a fake horse called Secretariat couldn't shake things up, it might be time for a more symbolic gesture, like having a woman or an African-American host one of the late night shows. (Executives would do well to remember that until three years ago, daytime talk TV was ruled by an African-American woman.) But in the meanwhile, tune in on 19 December for one last jig with Secretariat and one final awkward pause with Craig Ferguson. 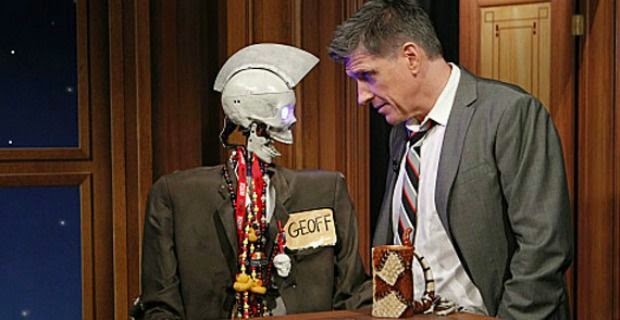 This piece appeared in The Sunday Guardian.
Posted by a fan apart at 10:40 PM