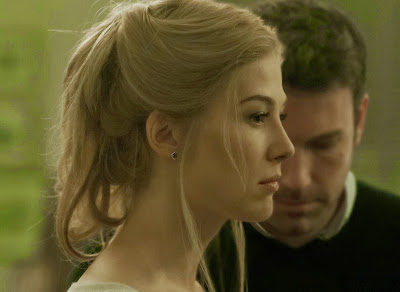 I'd hate to be inside David Fincher's mind. I picture a waiting room done in blacks and greys, surfaces gleaming. Piped music that sounds like cats being electrocuted. A couple of books stacked in a corner: Stieg Larsson's Millennium Trilogy, Observations on Bloodletting, A Clockwork Orange. "L'enfer, c'est les autres", the sign over the door reads. "Hell is other people."

Has there ever been a director who has subjected his characters and audience to as much misery as Fincher has? Gwyneth Paltrow's head was handed to Brad Pitt in Se7en, Edward Norton beat himself to a pulp in Fight Club and Rooney Mara had a miserable time as the heroine of The Girl with the Dragon Tattoo. And that's just a top tier of malcontents and misanthropes who've wandered through his films. So it's hardly surprising that his latest, Gone Girl, adapted by Gillian Flynn from her 2012 novel, has these words right at the start: "When I think of my wife, I picture cracking her lovely skull, unspooling her brains."

The skull in question belongs to Amy — Amazing Amy to fans of her parents' children's books. Her husband, Nick, is also a writer, rendered jobless by the recession. It's their fifth wedding anniversary, but Nick's hiding out in a bar. When he does reach home, he finds a broken table and no sign of his wife. Decades of TV procedurals have taught us what happens next: traces of blood, search parties, vigils, press conferences. Then, with no answers forthcoming, people start to wonder why Nick is acting so normal.

At first, there seems to be some justice in Nick finding himself the object of suspicion for his wife's murder. We learn, through flashbacks narrated by Amy, how he became distant and unloving; how he pushed her violently; how he had an affair with a student. Yet, the more we learn about Amy, the more we're reminded that in Fincher's world nobody's nice, everyone's out to get theirs and the sun never shines. Characters are introduced — a pair of stolid detectives, a couple of old boyfriends, one with a history of mental instability — but the focus remains on Nick and his girl, now presumed gone from this world.

It's only when it switches from a straight-ahead mystery to an indictment of 21st century media culture that Gone Girl becomes truly riveting — and surprisingly funny. Once Nick realises that his stoicism is hurting his chances, he begins to perform for the cameras. "First they like me, then they dislike me, then they hate me, and now they love me," he says, half-unbelieving, to his twin sister, the only person who still believes he might be innocent.

Ben Affleck and Rosamund Pike may not have been obvious choices for the leads, but the more the film progresses, the better Fincher's instincts seem. Affleck has always held back as an actor, a tendency that makes Nick seem all the more guilty. Pike, on the other hand, alternates between bottling up her resentment and letting it explode, her deep black eyes burning holes in the scenery. Carrie Coon is terrific as Nick's straight-talking sister, though Neil Patrick Harris as Amy's psycho ex feels a little like stunt casting. The score, like the previous two Fincher films, is by Atticus Ross and Trent Reznor. It might be their best yet: romantic and warped, chilly and enveloping.

And, of course, there's the man pulling the strings. It's been 22 years since Alien 3, and you have to give the man credit for not softening his worldview after all this time. Like a more commercial Michael Haneke, Fincher uses his formidable skills to turn sadism into art. And in Flynn, he seems to have found his misanthropic ideal: the novelist is set to write a season of the upcoming HBO show Utopia, which he'll direct. "All  we did was resent each other, try to control each other. We caused each other pain," Nick says at one point. "That's marriage," Amy replies. That's Fincher.

This review appeared in The Sunday Guardian.
Posted by a fan apart at 5:01 AM