Whose '68? 'Medium Cool' and the limitations of 'The Trial of the Chicago 7' 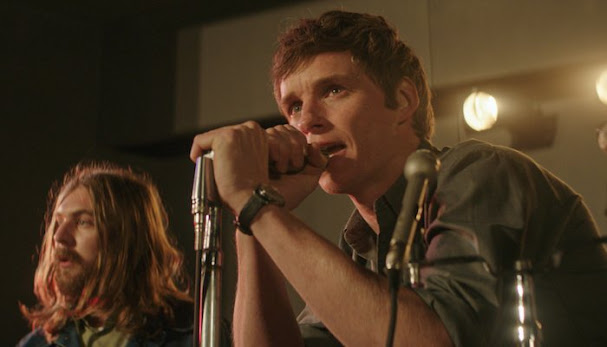 Trust Aaron Sorkin to bring Strunk & White to a riot. William Kunstler (Mark Rylance), defense lawyer for the Chicago 7, the motley group of anti-war protestors accused of starting a riot on the occasion of the 1968 Democratic National Convention, has just been given a tape by the prosecution. On it is student leader Tom Hayden (Eddie Redmayne), one of the seven, seemingly inciting the crowd, shouting: “If blood must flow, let it flow all over the city.” We flash back and forth between Tom’s recollection of the events of the night and a mock-interrogation by the lawyer. After a heated exchange, Kunstler asks, “Who started the riot, Tom?” Instead of replying, the young man says, “Our.”

This is an old Sorkin trick, having a character say something cryptic in the middle of an intense scene (like Mark Zuckerberg muttering “It’s raining” in The Social Network). Abbie Hoffman (Sacha Baron Cohen), another of the accused, is the only one who understands what’s going on. Tom, he says, has a tendency to imply possessive pronouns—he’d meant to say “If our blood must flow”, not the cops’ blood. This has several effects at once. Tom is immediately absolved in the group’s eyes. It posits Abbie and Tom as Men of Grammar—which in a Sorkin film is everything. And because Abbie speaks up for him, Tom argues that he should take the stand in his place.

How neatly it all fits together. Tom is a good citizen, not a riot-instigator, and Abbie can testify in court, as he did in the actual trial. Yet, as I watched and marveled at the intricacy of Sorkin’s construction, something gnawed at me. I later realized it was the sheer professionalism of the scene. The timing, the impeccability of the writing, the way it ties everything up, prizes elocution over effect—it felt so smooth as to almost be a con. I'd felt similarly about Steve Jobs (2015), but at least there the airtight precision of Sorkin's writing was in line with the subject, whereas here it’s an uneasy fit with the messiness of '68.

With its syncopated dialogue and winsome cast, The Trial of the Chicago 7 is undeniably pleasurable. Sorkin isn’t a visually arresting film-maker; one gets the impression he’s writing even when he’s directing. He’s at his best deflating powerful people and institutions, and at his most saccharine when praising them. “I think our institutions of democracy are a wonderful thing that right now are populated by some terrible people,” Hoffman says in his testimony. Sorkin is an incurable romantic pretending to be a cynic—even his anarchists love democracy. The ending is an embarrassingly triumphal set-piece, with Tom reading aloud the names of everyone killed since the war began, strings swelling, almost everyone in court (including the buttoned-down prosecutor) applauding while the defendants stand with fists raised.

It’s been suggested that The Trial of the Chicago 7 is uncannily of this moment. Without dismissing such claims, I’d hazard that audiences in the 1970s, '80s, '90s and 2000s would have found it equally timely. There’s scarcely been a time in the last half century when people, especially those of a liberal bent, have not felt like civil rights are being impinged, free thinkers are being silenced and the government has something to hide. When asked if he was hoping for a confrontation with the police, Abbie Hoffman (in a beautiful line reading by Cohen) tells the prosecutor, “Give me a moment, would you, friend? I’ve never been on trial for my thoughts before.” Sorkin fades to black, as if any answer would be unable to match something so profound.

Another view of the events of ’68 can be found in Haskell Wexler’s Medium Cool (1969), a film as chaotic and charged as the time it's set in. Wexler, a cinematographer, was already famous for shooting Who’s Afraid of Virginia Woolf? (he’d go on to shoot One Flew Over the Cuckoo’s Nest and Days of Heaven). He’d also directed non-fiction—something which would inform the unique hybrid nature of Medium Cool. The film is part verité documentary, part fictional narrative built around John Cassellis (Robert Forster), a reporter and cameraman with a local news channel in Chicago, a cool, calculating figure without much of a moral compass.

Medium Cool began shooting at the end of July 1968, and continued through the tumultuous months that followed. Wexler didn’t need a weatherman to know which way the wind was blowing ("I knew there would be demonstrations and that the police would suppress them," he told Time Out Chicago in 2013). One of the scenes in the film is a jokey riot simulation conducted by the National Guard, in which half the troops are dressed like hippies and the other half quell the protest. Wexler was there when the real protests broke out, incorporating them into his story, actor Verna Bloom making her way through the smoke and the chaos in a bright yellow dress.

There’s a memorable breaking of the fourth wall. A tear gas cannister lands in front of the camera and a voice says, “Look out, Haskell, it’s real.” It was real, though Wexler admitted the line was added later.

The Black Panthers figure in Sorkin’s film—their co-founder, Bobby Seale Yahya (Abdul-Mateen II), is on trial too—but they lack the edge they possess in Medium Cool. There’s an extended sequence where John tries to barge his way into a black household to do a human-interest story and gets threatened and called out. This is followed by a couple of Panthers addressing John’s camera (and the viewer). “Why you always got to wait till someone gets killed?” one of them asks. The next scene is white women at a shooting gallery.

Medium Cool is unmistakably a product of its time, with its agitprop directness, sexual openness and New Wave sensibility (you can see a poster of Jean-Paul Belmondo, star of Jean-Luc Godard’s Breathless, in John’s room). It’s fragmentary and jumpy, as verité by nature is, not a polished work but one that gives the impression of having been made up on the fly. Yet, as a portrait of that tumultuous time, it embraces all the contradictions and rough edges that Sorkin’s film smoothens out to tell a more universal story.

Both Sorkin and Wexler’s films end with that famous rallying cry of Chicago ’68: "The whole world is watching". In The Trial of Chicago 7, it’s almost an afterthought, a single chant after the applause and the music is over and we’ve been told where the main characters ended up. At this point it doesn’t mean anything—the urgency of revolution has been diluted by five minutes of triumph. Medium Cool’s ending, on the other hand, is anything but victorious. There's a car crash, swift and unheroic, like the one in Easy Rider that same year. The camera pulls back from the accident, swivels and settles on… Wexler behind a camera. As we slowly zoom in, Wexler's gaze turned on his own movie and on us, the soundtrack juxtaposes "The whole world is watching" with a voice on the radio describing the mayhem at the protest site. In a film that gazes both outward and inward, it's an ending that defies any easy interpretation.

This piece appeared in Mint Lounge on 27 October 2020.