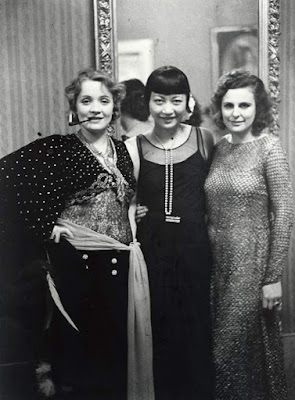 Amanda Lee Koe’s novel takes its title from a line in a Roland Barthes essay, in which he describes the radiation from a photograph touching the viewer “like the delayed rays of a star". In this case, the light emanating is from a publicity still of Leni Riefenstahl, Anna May Wong and Marlene Dietrich, taken by Alfred Eisenstaedt in 1928 in Berlin. Koe follows this diffused beam across time, expertly using it to illuminate little corners of the 20th century.

Though the two Germans would soon eclipse her fame, Wong was the biggest star in the photograph, having played Tiger Lily in Peter Pan and starred opposite Douglas Fairbanks in The Thief of Bagdad. Riefenstahl was then an actor, known for her nature films; she would soon catch the eye of Hitler and turn to film direction. And Dietrich wasn’t a star at all, still two years away from Josef von Sternberg unleashing her distinct brand of smoky sexuality in The Blue Angel.

With the photograph as a jumping-off point, Koe proceeds to make dizzying leaps across time and space. After starting in Berlin, we’re suddenly in Paris, with Dietrich as a cantankerous, elderly recluse; next we’re in China, following the journey of her maid, Bébé. In one stunning chapter, we follow a wolf from a forest in Czechoslovakia to the Leipzig zoo to the sets of a film Riefenstahl is shooting in the Bavarian Alps. Sternberg is moved to tears by a noh performance in a Tokyo monastery. A Smiths fan attends a Joy Division gig in London and serves David Bowie drinks in a Paris bar.

Despite its expansive canvas, Delayed Rays trips lightly and confidently from incident to incident, character to character. Much of what happens in the book is anchored in fact, but the embellishments are Koe’s. A meeting between Wong and German critic Walter Benjamin is imagined over the space of a chapter. As I ran into one obtuse word after another, I realized with delight that Koe’s prose had taken on the qualities of Benjamin’s fussy language (“he found himself unwilling to verbalize to her how the extemporaneous interpolation of various spheres of her being…"). Later, a winding sentence describing Sternberg’s travels in Asia has the same exotic detailing as the director’s films.

In a 2017 interview, Koe said that shuttling between her native Singapore and New York felt like “a split existence". “I guess when you’re away you always see the other thing more clearly. So it is interesting to have that dual perspective as well." Whether by design or not, Delayed Rays abounds in dualities. Dietrich—German but also American; lover of men and women—is described by Sternberg (himself suspended between American and faux-Continental) as having a “lust for bothness". Wong is American, but in the eyes of Hollywood she’s Chinese, forced to adopt Oriental clichés. Riefenstahl’s biggest supporter is Hitler and her funder the Nazi government, but she thinks of herself as an apolitical artist, pure (hearing this last descriptor from Hitler’s mouth is chilling).

Though Delayed Rays is mostly concerned with fame in the first half of the 20th century, several of the issues it grapples with are bracingly modern. Riefenstahl practically begs us to separate the art from the artist, to call her a genius for Olympia (completely deserved) but gloss over Triumph of the Will’s deification of Hitler. She also corrects a reporter who calls her the first female film-maker, saying she’s just a film-maker. Then there’s the matter of representative casting in Hollywood. More than half a century before Scarlett Johansson became a meme, the part of O-Lan in the adaptation of Pearl S. Buck’s The Good Earth went to a white woman. Wong, for whom the part seems tailor-made, is deemed “too Chinese to play a Chinese" by the studio.

Koe writes beautifully about cinema and its effects. If you haven’t seen Shanghai Express, I would recommend watching two isolated scenes from the film, both of which are on YouTube. The first is a comic one, with Dietrich putting down a supercilious woman, and Wong joining in with the punchline. The second is even more thrilling, an action scene with an erotic charge. Koe imagines how these must have unfolded on set, with the autocratic Sternberg (Dietrich’s lover) and the two stars, also lovers once (in the book at least). Elsewhere, Sternberg tells Riefenstahl that cinema is “time on the axis of sight", a description so perfect that it sounds like it came from the real Sternberg, though it’s probably Koe writing in Sternberg’s voice.

When Riefenstahl is called by Hitler for a final meeting, he asks her for a favour. She’s surprised to learn that even with defeat imminent, he’s concerned about the unreliability of film stock and would like her to work on a more durable material after the war. That Koe finds a way to make Hitler a film preservationist is the sort of unexpected delight this book regularly passes on from writer to reader. Style never hesitates, we’re told at one point. Style necessitates. Koe finds her style from the start, and never looks back.

This review appeared in Mint Lounge.
Posted by a fan apart at 1:49 AM